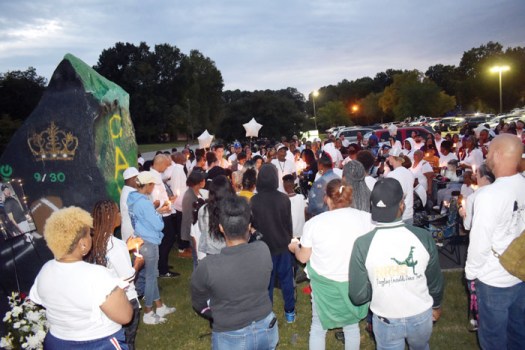 Many in the group bowed their heads as they listened to Cassandra Woodson, mother to 27-year-old twins James and John, express her grief before breaking down. Photos by Elisabeth Strillacci / Salisbury Post 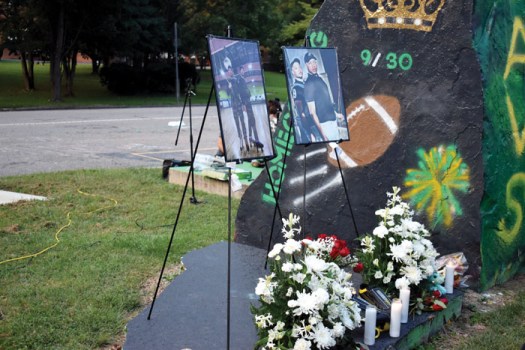 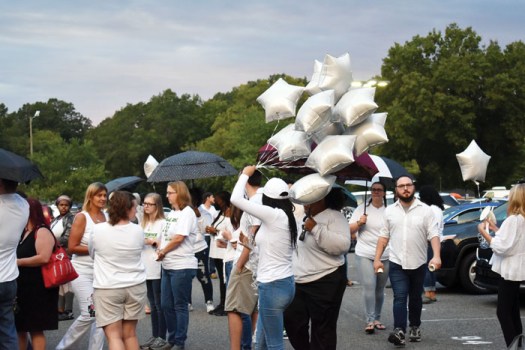 Silver balloons were gathered for release in memory of twins John and James Woodson who were killed in a car crash a week ago. Elisabeth Strillacci / Salisbury Post

SALISBURY — The light rain falling was held off by umbrellas for some, others just let the drops mingle with their tears at a memorial service Saturday night.

Well over 200 people gathered at North Rowan High School as the sun set to say good-bye to James and John Woodson, twins who left a tremendous mark on Rowan during their brief 27 years on earth.

AJ Chapman, who spearheaded the event, has said he intends to start a transportation business “called J&J Transportation in tribute to my loving brothers.”

Cassandra Woodson, the twins’ mother, said she did not think when her sons were born that they would leave life together as well. Grandmother Kathleen Chambers of Spencer thanked all in attendance “for so much love, for so many of you coming out to show us how much you loved them, just like we did.”

“They brought so much joy to everything they did,” said Tod Kubo, dance coach, mentor and big brother to the boys. “I know they are still here with us. Just like before, when you spent time with them, you’d leave them, then about fifteen minutes later, you’d give a little snort. Then maybe an hour or so later you’d be thinking about them and laugh out loud. Then hours would go by and you’d think of them and realize you were doubled over in laughter. So anytime you laugh, any time you feel joyful, they are still with us.”

Both young men were talented singers, dancers and actors, performing in numerous plays at both the Norvell and Meroney theaters in Salisbury. Included in their repertoire here in North Carolina were “Grease,” “Dreamgirls” and “A Color Purple,” and the pair did travel to California for a time to wade into the art and theater world before coming back home.

Numerous people spoke at Saturday’s memorial, each calling up some happy memory of the two, often causing ripples of laughter or even outright guffaws at times.
The twins were killed just over a week ago when their car was hit head-on by a vehicle traveling the wrong way on I-485 just outside Charlotte. The driver of the other vehicle has been charged with driving under the influence. The passenger in his vehicle was also killed.

Donations to help cover the cost of funeral expenses can be made through Piedmont Players on their website or directly to the Noble and Kelsey Funeral Home, Inc., 223 E. Fisher St, Salisbury, NC 28144. A visitation will be held at Livingstone College Sept. 30 from 11 a.m.-noon.