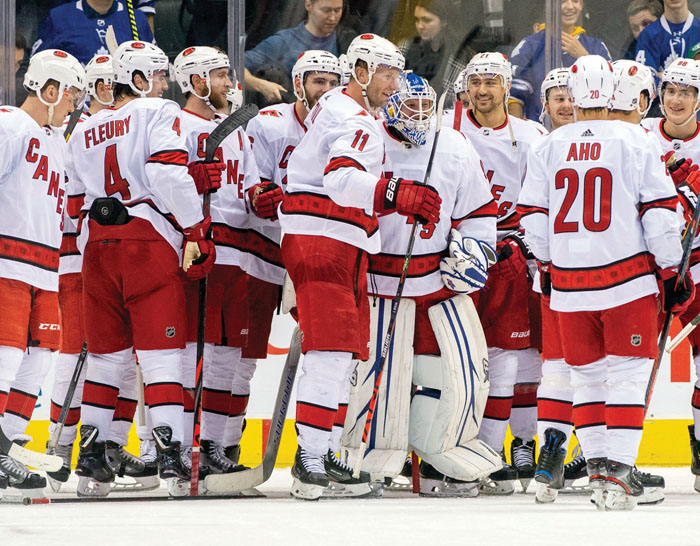 Hurricanes coach Rod Brind’Amour says that knowing what works, ‘How do you refine it, how do you keep sharpening the knife so to speak?’ (Frank Gunn/The Canadian Press via AP file photo)

The Carolina Hurricanes have traded overhauls for retooling in becoming a perennial playoff team. The hope is the latest changes are enough to win the Stanley Cup.

Headlining talents like Sebastian Aho, Andrei Svechnikov and Teuvo Teravainen have matured from playoff newcomers to veteran mainstays in four straight trips, including the past two years as a division champion. That’s true, too, of coach Rod Brind’Amour, a first-time head coach in that 2019 run to the Eastern Conference finals that followed a nine-year playoff drought for Carolina.

“I know the first camp it was like, ‘OK is this going to work? I don’t even know if putting this in makes sense,’ ” Brind’Amour said. “Then it’s, ‘OK obviously this works so now how do you refine it, how do you keep sharpening the knife so to speak?’ That’s way different now, because that’s the phase we’re in vs. the I’m-not-sure phase.”

Carolina has accomplished Brind’Amour’s goal of being relevant again, though climbing higher among the elite has been a tougher challenge.

The Hurricanes have fallen in the second round for two straight years with home-ice advantage. Last year’s team had the oddity of failing to win a road game, first in a seven -game win over Boston followed by another seven-gamer against the New York Rangers that ended in a blowout home loss.

The returnee group includes captain Jordan Staal and top defensemen Jaccob Slavin, Brett Pesce and Brady Skjei. Frederik Andersen — one of last season’s top netminders before missing the playoffs due to injury — is back along with Antti Raanta. The list of newcomers include 2017 Norris Trophy winner Brent Burns.

“It’s the same system, same guys and same coaches,” forward Jesperi Kotkaniemi said. “I think this year we’ll be better. We have high expectations for the whole team. Hopefully we can reach them.”

Burns, acquired in July from San Jose, is an 18-year NHL veteran set to join Carolina’s top defensive pairings with the trade exit of Tony DeAngelo. Burns, 37, has appeared in 679 straight games dating to the 2013-14 season and was among the league leaders in ice time last season.

“I think he’s the perfect fit,” Brind’Amour said. “I hate that we had to wait until he’s been in the league for 20 years to get him. but better late than never.”

New players include the signing of forwards Paul Stastny and Ondrej Kase, while the Hurricanes also acquired forward Max Pacioretty and defenseman Dylan Coghlan in a trade with Vegas. Pacioretty is a six-time 30-goal scorer joiniing a team looking for more output from its forward group, but he is recovering from surgery for a torn Achilles tendon with a recovery expected to last into midseason.

The losses of Vincent Trocheck and Nino Niederreiter in free agency have left a significant hole as second- and third-line forwards. Carolina also saw the departures of forward Max Domi and defensemen Brendan Smith and Ian Cole.

The Hurricanes signed the 22-year-old Kotkaniemi to an eight-year extension in March. They envision the former No. 3 overall draft pick from 2018 filling Trocheck’s role as the second-line center. Carolina also re-signed forward Martin Necas in August, keeping their 2017 first-round pick after he struggled through an inconsistent season.

The Hurricanes are looking for another step from forward Seth Jarvis, who was a key contributor as a rookie but was knocked from Game 7 of the Rangers’ loss on a jarring hit that left him with an apparent concussion.

Jarvis said the first few weeks of his recovery was “not great,” even noting he had trouble going to the gym to work out amid loud music and clanging weights. At one point, he was focused on going for walks or riding a stationary bike in silence before gradually improving.

The Hurricanes open at home against Columbus on Oct. 12 then head west for five straight road games.

The Hurricanes also finally get to host their first outdoor game after the 2021 one was postponed due to the COVID-19 pandemic. Carolina will face Washington on Feb. 18 at Carter-Finley Stadium, home to the North Carolina State football team and located next to the Hurricanes’ arena.

Carolina closes the regular season against Florida on April 13.