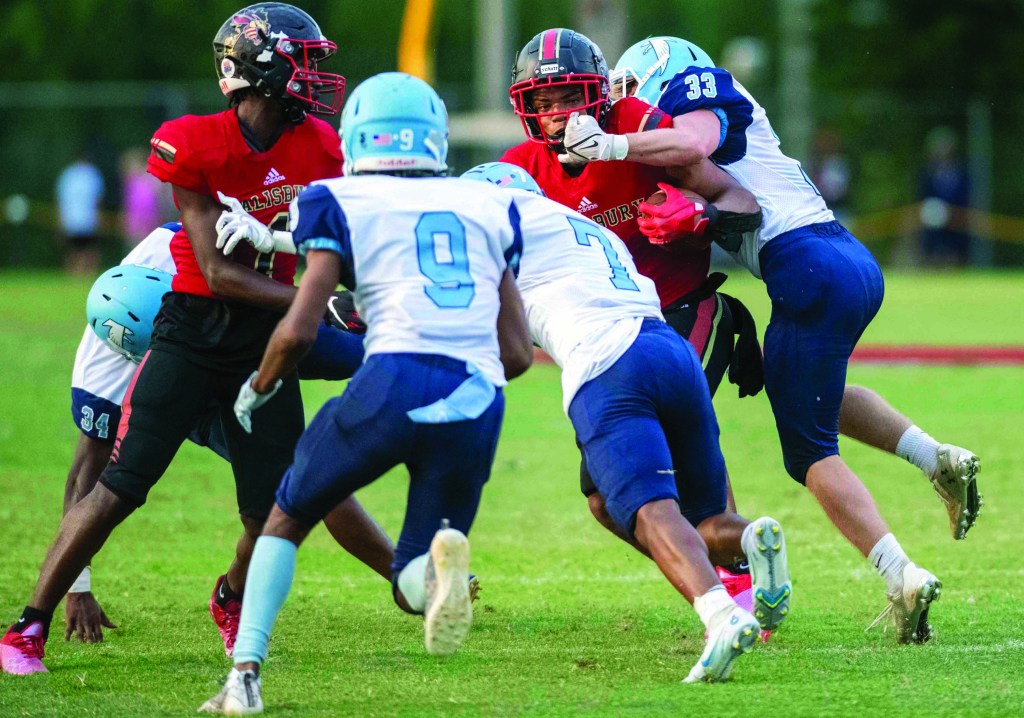 SALISBURY — Salisbury senior JyMikaah Wells became the first in  program history to score six touchdowns in a game, and the powerful back led the Hornets to a 55-7 demolition of overmatched West Davidson on Friday.

“I’m honored to have a record like that,” Wells said. “A lot of great backs have run the ball for Salisbury.”

Homecoming can be a distraction, but the surrounding festivities only served to provide more fuel for Wells, a runaway truck in shoulder pads.

He carried 15 times for 242 yards and had almost all of his production in the first half. He had only three carries after halftime. Only the running-clock mercy rule prevented him from breaking every rushing record in Rowan County. There wasn’t much the Green Dragons (2-3, 0-1) could do to stop him.

Wells suffered an ankle injury very early in Salisbury’s third game (East Rowan) and missed the following week’s game at South Rowan, but he returned strong in the big win at Thomasville and is obviously 100 percent now.

“I couldn’t walk the day after the East game, but it’s all good now,” Wells said.

The Hornets (5-1, 2-0 Central Carolina Conference) hadn’t played a football game at Ludwig Stadium since the opening-night debacle against West Rowan.

They showed they’ve come a long way in 35 days.

The Hornets also were stifling on defense, holding West Davidson to two first downs in  the half, made some plays on special teams and did whatever they wanted to offensively.

Wells, who has been offered by Winston-Salem State, rambled 51 yards on the first snap from scrimmage. Two plays later, he owned the first of those historic six touchdowns.

“When you get 51 yards on the first play, you know you’re in for a good night,” Wells said. “We wanted to get the wideouts involved early — and we did — but the plan was to run the ball tonight and we had a lot of success.”

After the first of many West Davidson three-and-outs, the Hornets showed they could throw it. Mike Geter connected with Deuce Walker for an 18-yard gain, and then found Hank Webb on a 48-yard scoring play. Webb also does the kicking, and his PAT made it 14-0 after four minutes.

Joseph Baker, who has provided most of West Davidson’s offense this season, was injured on the next series, and after a short West Davidson punt, Wells scored immediately for a 21-0 lead.

A blocked punt led to a Geter-to-Walker touchdown pass and a 28-0 lead.

After an interception by Sean Young, Wells got his third TD. It was 35-0 after a quarter.

Wells went high-stepping into the end zone following  another spinning, tackle-breaking run, and the Hornets owned a 41-0 lead just a minute into the second quarter.

By halftime, Wells had five touchdowns and 224 yards in the book.

Geter sat down at the half, with Webb moving to quarterback and making the handoffs to Wells and Jamal Rule.

Wells got his sixth TD from the 1-yard line with 5:10 left in the third quarter.

Wells, who missed the South Rowan game and almost all of the East Rowan game with an ankle injury, had three TDs for the season prior to Friday’s explosion.

Led by Dashawn Brown, Amare Johnson and Damian Brandon, the Hornets’s defense allowed less than 50 total yards and came close to a shutout.

West Davidson got on the board with 3:25 remaining. Brett Rabon scored on a short run. Allie Brown kicked the PAT.

Salisbury has won at Thomasville and Thomasville won Friday at North Rowan, so the Hornets are the team to beat in the CCC race.

The Hornets will go to South Davidson next.