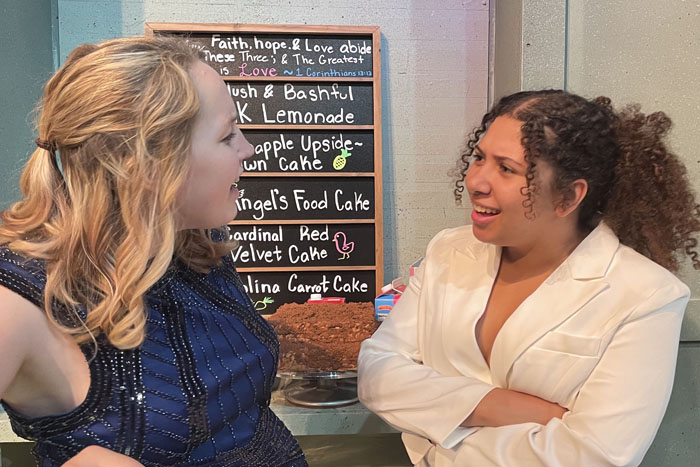 Catawba College is putting on 'The Cake' with Adison Schwab as Della and Aslyn Goodwin as Macy. Submitted photo

SALISBURY — The Catawba College Theatre Arts Department begin the 97th season of theatre with “The Cake” by Bekeh Brunstetter at Hedrick Little Theatre tonight and Sept. 24, 30 and Oct. 1 at 7:30 p.m. and Sept. 25 at 2:30 p.m. Tickets are free for Catawba students, faculty and staff; $12 for adults, and $10 for seniors, children and non-Catawba students. Tickets are available at Catawba.edu/theatretix, in person at the box office, or by calling 704-637-4481.

Playwright Bekah Brunstetter hails from Winston-Salem and lives in Los Angeles. Her plays include “The Cake,” “Going to a Place Where You Already Are” and “The Oregon Trail.” She has previously written for MTV (“Underemployed; I Just Want My Pants Back”), ABC (“Family’s Switched at Birth” and Starz’s “American Gods”) and most recently was a co-producer on NBC’s “This Is Us.” She received her B.A. from UNC Chapel Hill and her M.F.A. in dramatic writing from the New School for Drama.

“The Cake” beautifully bakes together a story of love, family and cake as it follows the story of Della and Jen. Jen lives in New York but has always dreamed of getting married in her native North Carolina. With the wedding six months away, she heads down South to ask Della, her late mother’s best friend who owns a bakery there, to do the honors of making her wedding cake. Della’s cakes are the best—she’s going to compete on the Great American Baking Show, no big deal. Della is overjoyed to make Jen’s cake—until she realizes that there isn’t just one bride, but two. She can’t really bake a cake for such a wedding, can she? Moral quandaries, reality TV and loads and loads of butter form this play about three women trying to reach out across a divide that just keeps growing.

Brunstetter explained her inspiration for writing “The Cake:”

“I see both sides of this issue and couldn’t have written the play if I couldn’t see both sides. My parents share the same beliefs as this baker, so I can’t turn my back on it. And I can’t turn off my empathy, so I’m stuck trying to figure out what to do,”  she said.

“When I first read The Cake, I was charmed by its quirky writing and the incredible love I felt for these characters,” said director Dr. Beth Homan. “Bekah Brunstetter’s This is Us turned the network family drama format on its head. Bekah’s writing in The Cake does the same for contemporary stage drama. It’s a play with incredible heart, and a successful work in that it holds a mirror up to an extremely timely issue in a well-balanced manner.” She continues, “When looking for plays for our 97th season, our goal was to find uplifting works that wouldn’t leave our audiences feeling isolated in their own viewpoints, and most importantly, to encourage empathy for the world around us. Our theme this year is Transformation.”

Adison Schwab, first-year student, notes that the most challenging part of playing the role of Della, “is finding a balance between a kind heart and strongly held beliefs. It’s hard to convey that to the audience.”

Homan added, “I have a fantastic cast of inquisitive, bright, and generous young actors who are willing to dig deep, ask some difficult personal questions and truly reveal themselves. I treasure every second that I get with them.”

Julia Rockwell is the cake designer for the artificial pastries.

Homan notes that “The Cake” challenges the audience to “look for themselves in each of the characters. It is easy to judge from the outside. It’s harder to discover where these people live in us and is that the person we want to be.”