Honoring the Constitution on its birthday 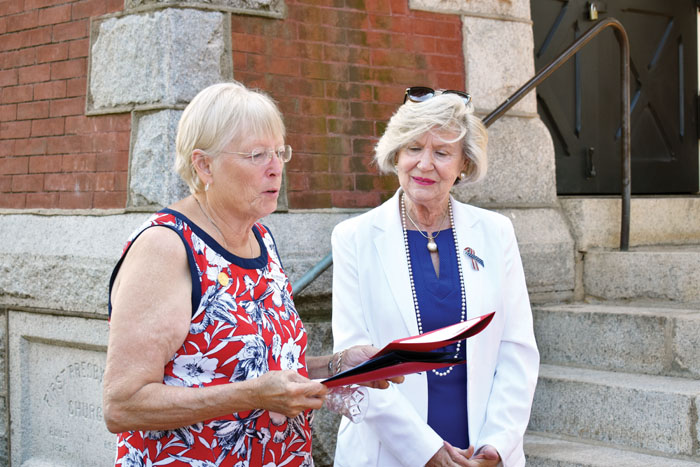 SALISBURY — Members of the local chapter of the Daughters of the American Revolution (DAR) gathered at Bell Tower Green Saturday to celebrate the anniversary of the day the Constitution was signed.

Joined by Salisbury Mayor Karen Alexander, who read a proclamation that acknowledged last week as Constitution week, members of the Elizabeth Maxwell Steele chapter rang bells together at 4 p.m., the time the document was reportedly signed.

“It is so important to keep our history alive, and to remember what this country was founded on, which is what the Constitution is all about,” said Regent Sandra Czuba.

In the proclamation, Alexander stated “the Constitution of the United States of America is the guardian of our liberties and embodies the principles of limited government in a Republic dedicated to rule by law.” She noted it is “the privilege and duty of the American people to commemorate the 234th anniversary of the framing of the Constitution.

In 1955, the DAR petitioned the United States Congress to dedicate the observance of Constitution Week from Sept. 17-23 each year, and in 1956, President Dwight D. Eisenhower signed the commemoration into Public Law, which guarantees the issuing of a proclamation each year by the president.

“The celebration’s goals are threefold,” said a statement from the chapter. “To encourage the study of the historical events that led to the framing of the Constitution in September of 1787; to remind the public that the Constitution is the basis of America’s great heritage and the foundation for its way of life; and to emphasize US citizens’ responsibility to protect, defend and preserve the Constitution.”