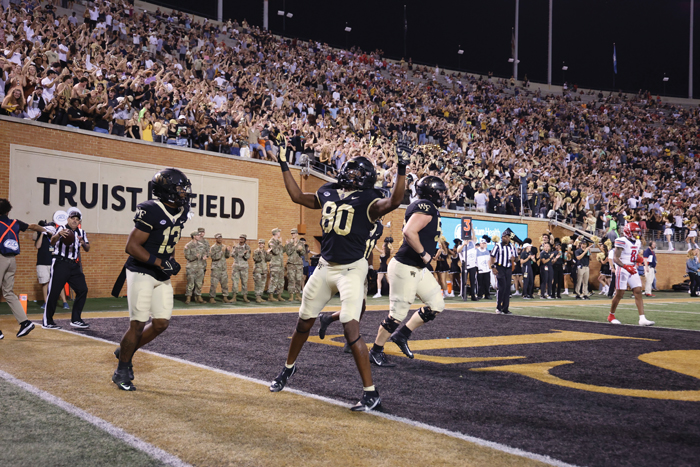 CLEMSON, S.C. — Clemson’s opportunity to take control of the ACC’s Atlantic doesn’t get much clearer.

The fifth-ranked Tigers have the chance become the division’s clear favorite — or fall into a pack of contenders fighting things out for an Atlantic crown.

Sweep them both and — before October truly gets going — Clemson has separation and tiebreakers over the two teams voted mostly likely to thwart the Tigers’ drive back to a ACC title. A loss or two and the Tigers would have an steep hole to climb out to regain the league title it held from 2015 through 2020.

“If we want to get to where we want to be at the end of the season,” Clemson defensive end K.J. Henry says, “we’ve got to handle our business.”

Business for the Tigers has been very good in the past decade.

Clemson holds a 13-game win streak over Wake Forest and a 9-1 mark over North Carolina State. The lone defeat in that span was last season when the Wolfpack won at home, 27-21, in overtime.

The Demon Deacons’ last win against Clemson came in 2008, which led to the ouster of then-coach Tommy Bowden and the promotion of current Tigers coach Dabo Swinney as an interim choice.

Wake Forest coach Dave Clawson has long heard of all the teams his program couldn’t beat. He remembered losing five straight to Florida State and three in a row to N.C. State after arriving — but the Demon Deacons have won their past two against FSU and four of the past five over the Wolfpack.

“You could go through half the ACC and we had not beaten,” said Clawson, in his ninth season at Wake Forest. “Obviously in the Atlantic Division, this is the one we haven’t gotten yet. But there’s a lot of teams that haven’t got them because they haven’t lost a lot of games.”

Clemson knows what’s at stake and will keep the same mindset they’ve used in winning their last nine games, the longest streak among Power Five teams.

“We try and bring that juice every single week, every single day,” Clemson linebacker Jeremiah Trotter Jr. said. “We try and treat every week like it’s the biggest game of the year.”

Don’t count on complacency from the Tigers, offensive coordinator Brandon Streeter said. The Demon Deacons “are the reigning champs in our division and we have the opportunity to build off of this season and continue to gain confidence,” he said.

North Carolina State has already hit some bumps to start the season, even in a hype-filled year.

The Wolfpack started the season ranked 13th in the preseason AP poll, matching the program’s highest to start a season set in 1975, only to survive at East Carolina in Week 1 when the Pirates missed two critical late kicks.

Two games later, preseason ACC player of the year Devin Leary at quarterback and his offense had an inconsistent showing in a home win against Texas Tech, including having touchdowns negated by both a penalty and a goal-line turnover. But the defense with 10 returning starters dominated the game and kept the Wolfpack in control.

“We’re going to try to get better,” Wolfpack coach Dave Doeren said. “I think that’s what really good programs do. It doesn’t matter who you play, it’s how you play.”