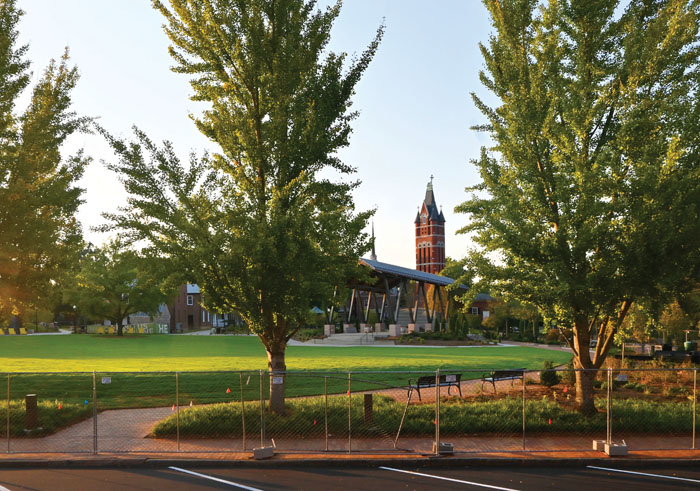 SALISBURY — There will be a flag in Bell Tower Green.

On Wednesday, Mayor Karen Alexander received a letter from Bell Tower Green Inc. saying the group would accept City Council’s unanimous vote to allow a permanent display of the American flag at the park, ending more than a year of tension over a request from a number of veterans to install the flag.

City Council members voted unanimously Tuesday night in favor of allowing the addition of a flag to Bell Tower Green, declining to follow a recommendation from the Bell Tower Green advisory board that a flag not be installed.

Members of that committee have said the installation of a flag had nothing directly to do with the flag itself, but with the overall design. As  Councilor Harry McLaughlin explained on behalf of the advisory committee, “the theme of the park was a place for everyone. It was designed to be seamless. As such, they saw the flag at the county building (on the corner of W. Innes and Church Streets) as being a part of the park, and felt it meant an additional flag was not necessary.”

Before the council members spoke, however, members of the public were given time to share their thoughts. More than 50 people attended the meeting and the public comment, while primarily courteous, had a few moments of tension when one speaker refused to follow the three minute restriction for comments.

But most of those who spoke, all but one of whom were veterans, were emotional and passionate. And most began or included in their comments thanks to the council members for their service to the city.

“Thank you for your service to this city, and thank you for allowing us the opportunity to speak from our hearts,” said Ronnie Smith, who was one of the veterans who helped spearhead the issue. “We respectfully ask that you please vote for what we know is the right and honorable thing to do.”

All public comments were in favor of the flag, and once members of the public who had signed up to speak were finished, the mayor invited council members to speak, and asked Anthony Smith if he would begin.

“I want to thank the advisory committee for their consideration, and all those who have a passion for this issue, including our veterans standing out there on the corner every day, holding the flag,” he began. “As the council, we have to consider broader issues than just the features of the park. But I want to remind us that the meaning of the flag is rooted in the Pledge of Allegiance itself: ‘…and to the republic, for which it stands…'”

Smith detailed that he, his brothers, his father and his grandfather were all veterans, and said he was speaking as a veteran and as a city councilor when he said he is in favor of the flag, but not just for the veterans.

“I want to be sure this is heard today,” he said. “As a veteran, I still would have served even if half the country didn’t like the flag. We served more than just the symbol of the flag. We served our fellow citizens. The committee members are not un-American for having concerns. The flag should not be used as a litmus test of whether or not you are American. I am in favor, but what I am really in favor of is the Republic. I am in favor of a symbol that celebrates our diversity, people of color, indigenous people, LGBTQ+ people, poor and rich – it is much more than for the veterans. I hope we tell a bigger story.”

Council member David Post described how the flag was the first thing his grandparents saw when they arrived at Ellis Island.

“I hate this as a political issue,” he said. “I don’t quite understand how that happened, but I don’t see how we say no to this.”

Mayor Pro Tem Tamara Sheffield said she had given the matter intense consideration, starting with “where would it go and how will we pay for it?”

“Whatever your passion is, I thank you,” she said. “Anyone who knows me, knows I am a note-taking fool who researches everything. And even if I don’t feel great about something personally, I will make a fact-based decision on what is best for the overall greater good.”

She said she has done so much research on the rules and regulations regarding flags and “now that I’ve read all this, I don’t even know if I’m doing it right” in displaying her own flag. She was in favor of the flag, but pointed out that she was saddened by what the issue grew into.

“It’s ironic that this is national bullying prevention month,” she said. “This flag is supposed to wrap around all of us. Sometimes I felt like you were saying some of us are un-American because we are not veterans. And no one has asked us, on the council, how we feel about the issue. The assumption has been that we were not in favor of it. We could be putting this level of passion into much bigger issues — ending homelessness for instance. I do fully support putting the flag in the park, but I don’t like the way all of this has made me feel.”

McLaughlin, who is the liaison between the council and the Bell Tower Green advisory committee, said, “There should be no backlash against the committee for their decision. They were looking at it from the perspective of the theme of ‘a park for everyone,’ a park that was seamless, and therefore the flag that is at the county building, to them, was sufficient. But as we have all said, this is America, where we can look at things differently and we should not be criticized for that. Seeing it that way does not make anyone un-American.”

City attorney Graham Corriher was asked about the N.C. state statute that addresses how a town or city can or cannot rule on a flag on private property, a statute that many of the veterans had interpreted to mean a flag must be added to community parks.

“The statute says the city can’t prohibit someone from putting a flag on their own property,” said Corriher. “It’s a prohibition on what the city can do. It is not a requirement of something the city must do. I just don’t think it applies here because it’s the city deciding whether or not to put a flag on city property.”

In wrapping up the meeting Tuesday, Alexander reminded everyone that while the issue might not have resolved as quickly as some would have liked, “I respect the process. If the veterans and all of us who love our country could remember the flag is a symbol of our representative government, which involved a process, we would be on track.”

Alexander reiterated those thoughts on Wednesday following the agreement from BTG Inc.

“This is a prime example of good governance,” she said. “If we trust the process, we end up with fair and true decisions. It demonstrates the flag’s symbolic representation of everyone, and by extension, our representative form of government. I am so very proud of the thoughtfulness every single member of our council put into this.” On Tuesday, she added, “you have seen five people from five very different backgrounds come together in a unanimous vote to support this. And that’s what taking the time to truly explore the bigger picture, and determine the best course for our community as a whole, looks like.”

Because of an agreement made with Bell Tower Green Inc. at the time the park was donated, the measure had to have the written agreement of BTG Inc. Fortunately, that did come Wednesday.

The council has asked the BTG advisory committee to choose a location for the flag and determine how it will be installed and notify the council within 30 days.