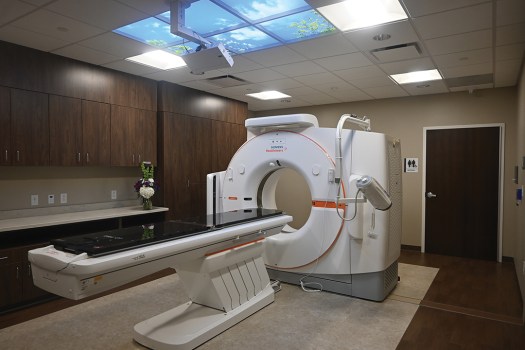 Madeline Wagoner/Salisbury Post — Dr. Greg Mitro (far left) shares the next level of patient care for the Wallace Cancer Institute thanks to the new CT simulator at the facility.

SALISBURY — The Wallace Cancer Institute, which opened in 2020, now has a new piece of equipment to improve radiation treatment thanks to a donation by local philanthropist and former Salisbury Post president, Gordon Hurley.

In honor of the new machinery, the center held an open house Wednesday offering a tour of the building and to show off the newest donation.

The facility provides a one-stop space for cancer treatment that cultivates a less-intimidating environment for patients. The new CT (computed tomography) scanner by the Siemens Healthineers is a step up from what was previously available for Dr. Greg Mitro to use in the Mocksville Avenue building where he provided care for cancer patients.

“We used to refer to that lovingly as the ‘cancer trailer,’ and we were there about two weeks and realized we need something bigger,” he said at the presentation Wednesday. “We need some new technology, we want advanced care in Rowan. We want to be able to keep patients locally for treatment.”

Oncologist doctors in Salisbury moved to another facility near Rowan Regional Medical Center, which provided a CT scanning machine that was adequate for treatment and diagnoses, but the Wallace Cancer Institute offers improved efficiency for those who come through the doors.

Campaign fundraising for the facility took place in 2016 and Novant Health received donations from Wallace & Graham, P.A. along with other private donations that totaled to approximately $12 million.

“This is something everybody in the community believed in so overwhelmingly and strongly to the point where they wanted to be a part,” she said. “They wanted to give no matter how small, it was an important gift and a significant gift.”

Caulkins said the project was completed in a short amount of time because of the high response from the Rowan County community.

Funds for the CT scanner were covered 90% by Hurley after he came to tour the facility, an amount that surprised the staff at Wallace Cancer Institute.

“My oldest son (Buck Hurley) was diagnosed with osteosarcoma in his knee and he got wonderful treatment, but he had to go to Duke in Durham,” Hurley said. “He got a lot of good treatment but it was a lot of trips back and forth and staying at hotels. It’s just good that everything can be here.”

He said donating to the center was a no-brainer.

A private ceremony was held for the family of Carolyn Hurley, who left a notable legacy behind in Salisbury because of the care she had for her community. She was a teacher at Overton Elementary and Knox Middle schools in addition to being on the chair of the Historic Salisbury Foundation Flea Market and chairman for a membership drive with North Carolina Museum of History Associates. She was also a survivor of breast cancer.

“If you describe a caring and giving heart, you are describing Carolyn and Gordon Hurley,” said Mona Lisa Wallace, who has represented cancer patients throughout the state for 40 years. She added that it took community effort to make Wallace Cancer Institute happen.

Throughout the evening, attendees could take a look at the CT scanner, which sections the patient’s body into three equal parts from the toes to the waist, the midsection and the chest and up to assist in the diagnoses and treatment for a particular cancer. Mitro said with the new technology, doctors will be able to see a 3D image of inside the body, allowing them to see real time functions of the internal organs, such as breathing patterns and how a patient’s body works in addition to tracking the cancer. Additionally, the Siemens Healthineers machine is five times faster than the old CT scanner at Salisbury’s earlier cancer treatment facility.

“We’re not just circling the area for treatment,”  Mitro said. “We’re actually tracking the tumors so we can treat people faster, safer and with less side effects.”

One helpful addition is an intravenous contrast injector that uses a specialized dye during scanning for optimal visuals that do not have to be manually inserted between imaging.

Interchangeable bed toppers also are a unique design t0 the CT scanner, allowing patients lay flat on their back, stomach or side depending on where imaging is required. If you’re on your back, six ceiling tiles of the imaging room have been replaced with a picture of  the blue sky overlapped by tree limbs. It is a touch that Mitro said patients always notice. Many find themselves frightened at the start of their treatment, so a less intimidating environment was one of the goals set out for the facility.

“Gordon, thank you so much,” Rowan Medical Center President Gary Blabon said when attendees gathered for the honoring. “You’re making a difference in lives here in Rowan County.” He added that without local philanthropists and donations, the Wallace Cancer Institute and improved equipment could not be possible.