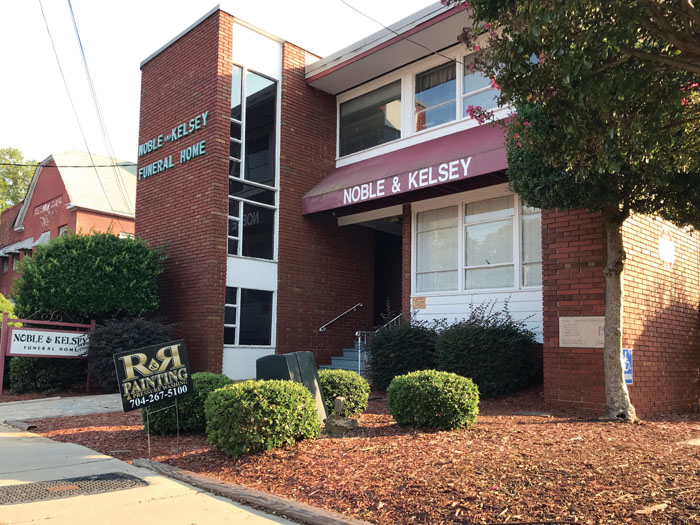 SALISBURY — The need for a Black funeral home and a desire to serve the people of Salisbury and Rowan County led to the beginning of Noble and Kelsey Funeral Home.

In 1902, W.F. Kelsey, a local barber, and Steven Noble, hearse driver for Wright’s Funeral Home and a local drayman (taxi and hauling), saw the need. The experiences of the two were compatible. Kelsey was called upon to prepare the dead and to assist families with their funeral services after a casket was purchased from a local casket maker or furniture company. Noble had the know-how from the varied tasks he performed at Wright’s Funeral Home.

Kelsey completed a course in embalming and was certified in 1906. After his marriage to the former Lula Spaulding, his wife became active in funeral activities, becoming the first female embalmer in North Carolina.

The three operated the business at 117 East Fisher Street, the store-front edifice housing both the funeral home and a barber shop. In 1928 a building was purchased at 225 East Fisher St., undergoing extensive remodeling and expansion.

After the death of Noble in the 1930s, Kelsey became sole owner of the business. Noble had asked, prior to his death, that the name of Noble be retained as a part of the funeral home as long as his widow lived. After her passing, the firm has continued to maintain this name in honor of one of the founders.

The Kelsey Mutual Burial Association was organized in 1932, providing protection for citizens in Rowan, Cabarrus, Davie, Montgomery and Stanly counties

Kelsey died in 1945 and his wife died two years later. Then A.R. Kelsey became sole owner, having been associated with the business since 1938, following his graduation from Livingstone College and the Cincinnati College of Embalming. He remodeled the building twice and continued the high class service initiated by his parents.

Acquiring the present facility (223 East Fisher St. in 1970) was another step toward attempting to maintain modern, first class service and adequate space.

Noble and Kelsey will be celebrating with a private employee commemoration dinner to honor the legacy and longevity of their existence. During the dinner they will also commemorate the deceased employees who dedicated their years, time and talents.

On Saturday, Sept. 24, at the funeral home from 1-4 p.m., there will be a community celebration with games, giveaways, food, fellowships and music featuring D.J. Peaches and Livehouse Band.

Organizations the funeral home is part of: