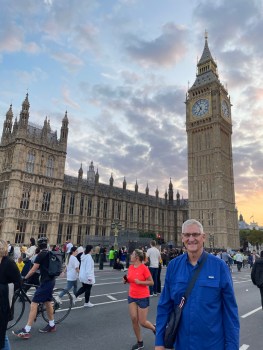 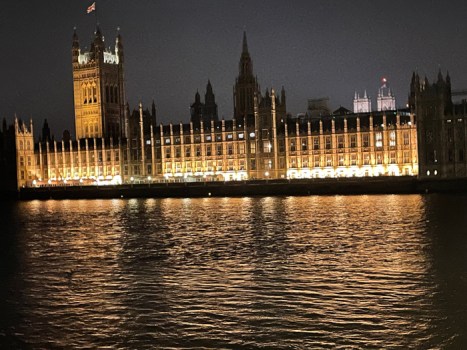 Larry Efird snapped this photo of the Houses of Parliament in London. 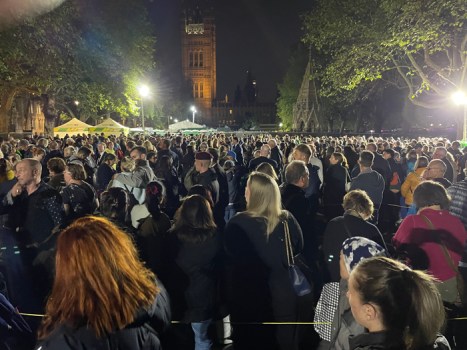 Larry Efird spent the final three hour leg/wait from rows upon rows of lines after a six-hour, 3-mile line outside Westminster Hall (not Abbey, which is a different building) Submitted photo

“When a man grows tired of London, he is tired of life…” — Samuel Johnson

Last May, a group of friends with whom I attended a small school in northern England during our college days decided to put together an impromptu reunion. It’s actually our 47th, so maybe we thought we wouldn’t make it to 50, but for whatever reason, the plans progressed and the date was set for September of this year.

I’ve been back to England only once during that time, about 22 years ago, to attend the funeral of a beloved teacher and friend. That itinerary did not include a visit to London so when I decided to make this trip, I knew I selfishly needed a few days in London before the reunion started. I wanted to reconnect with this magical city and to revisit some special places I first discovered as a young, 20 year old.

Little did those of us who committed to this 40-something reunion know that England would lose her royal mother at the same time we would be coming back to this “green and pleasant land.” When my wife first informed me that Queen Elizabeth II was entering her final hours on earth, we immediately knew how the focus of my planned trip to the United Kingdom would undoubtedly change.

Having taught innumerable former students far too many pieces from British literature to count, the result undoubtedly put a love for “all things English” in my blood — except for maybe a few culinary dishes such as steak and kidney pie or pickled herring.

I did acquire a discriminating taste for fish and chips because of eating them every Saturday night while a student. I do not, however, appreciate the popular side dish of green mushy peas because it reminds me more of bland baby food. (Even a British woman told me she felt the same way just yesterday.)

Not known for cuisine

For all their history, no one really goes to England for the food anyway, unless it’s perhaps for the multitude of experiencing the seemingly infinite international dishes found in a city as diverse as London. Their chocolates and pastries are good too. And for the folks who enjoy pub life, they are an entire subculture unto themselves.

After my cab driver dropped me off in the heart of London, following my overnight flight from North Carolina, I thought I’d take a short walk to get my sense of direction working in full force. The first day I made 12 miles. No kidding.

A little has changed over the past 47 years with the streets, but landmarks such as the towering Admiral Nelson in Trafalgar Square or the venerable Big Ben were in the same places fortunately. I knew if I could get to Trafalgar Square, I could find my way around town easily — so I thought anyway. That was before many sidewalks and streets closed, however, due to the upcoming funeral for a world figure. I hadn’t planned on that.

I knew once I learned the final funeral plans for the queen that I wanted to witness this moment in history first hand if at all possible. Having missed the public procession from Buckingham Palace to Westminster Hall where her body would lie in state for four days, I decided I would find a way to pay my respects along with thousands of others — somehow.

What began as a heartfelt desire quickly turned into a headstrong determination as I joined a 3-mile line of mourners who waited eventually nine hours to walk past a flag draped coffin adorned with an imperial crown, a royal scepter and a bejeweled orb.

Not knowing anyone in the line, otherwise known to the locals as “a queue,”I was quickly embraced by the folks around me. They wondered if I had flown to England just for the funeral. I hated to tell them that I was just a commoner and I hadn’t been invited, but telling them the
real reason I was in London made no difference at all. They treated me as one of their own, and I’ll be forever grateful. After standing in a nine-hour queue, we truly felt like family.

I realized at one point that my flight from RDU had been just under eight hours and this queue would eventually last nine! I also thought how Moses and the hundreds of thousands of Israelites following him must have felt crossing the Red Sea. We did cross the Thames (pronounced “Tims”) but fortunately we were on a bridge!

Many of them joked along the way how they were stuck in a never ending queue. They also appreciated the irony of how planning an impending funeral for at least the past 20 years had not allowed even the most detailed English officials who are famous for organized decorum and pomp and circumstance to cut down on the hours long wait time in the queue. They made jokes about it the entire way.

Everyone cheered on those around them to keep going as well. The angelic hosts of smiling police officers and volunteers also did their part to keep spirits light. This became even more important as we walked deeper into the night. People even shared snacks with those who had been total strangers earlier in the evening.

I saw at least two fellow queue comrades eventually collapse from exhaustion as a result of standing in place so long. Even so, one could feel the entire crowd quickly swell with good wishes as spontaneous applause broke out for the fallen and a renewed fervor to cross the finish line themselves no matter how many hours lay ahead.

No one really knew when they would finally enter Westminster Hall, the national “Holy of Holies” and the last standing structure of the original Parliament built almost a millennium ago. Queue waiters gave history lessons too! I learned from an elderly but “tough as a bird”lady behind me that the rest of the original building had been destroyed by a fire in the early 1800s, which led to the “newer” Houses of Parliament structure.

One unforgettable benefit from such a long and slowly moving line was that we were also able to enjoy a dramatic view of one of the grandest pieces of architecture in the world from across the Thames, along with the noble towers of Westminster Abbey peeping over in the background. The enjoyment of such a majestic sight was enhanced under a moonlit night sky accompanied with perfect fall temperatures. That alone was an unexpected pleasure which fittingly helped to keep the interminable queue members from abandoning the line and to persevere.

Perhaps a 6-year-old boy and his mother best symbolized the fervor and strength with which people waited to express genuine thankfulness for a life of a truly noble royal figure. When the little boy began crying, several adults around him would sing children’s songs or do silly dances to get his mind on something else. He never gave up despite his young age or his discomfort. Sixty years from now when he is my age I am sure he will be glad he persevered.

The army of newscasters from across the globe kept referring to all the “mourners” who had gathered to say a final farewell to their queen, but to be honest, the mood of the immense crowd with which I had the privilege to be a part from 7:30 p.m. Wednesday to 4:30 a.m. Thursday appeared to be “happy mourners.”They saw every reason to be thankful and positive even in their queen’s passing.

These “mourners” repeatedly stated that the queen would love to have known that her death had brought so many people together and that her country is currently showing an unprecedented outpouring of love to one another.

People are able to put aside their bitter political differences, at least temporarily, and to stand together and give thanks for the life of one who served them so well for 70 years.

I might have originally planned to come back to England for a reunion but what I have witnessed in the past 48 hours with very little sleep and very many steps has been an honor. Teaching may have put England in my blood but her people have put England in my heart. The death of a queen has truly touched the hearts of her people in a way I would never have known if I hadn’t shared nine hours of my life with them waiting in a queue.