SALISBURY — Kevin Swicegood has opened a mobile food truck, allowing him to bring his plates of barbecue to local events for all of Rowan County to experience.

His first event was Riot at New Sarum on Aug. 27 where he sold out of 50 plates in three hours. Trays of chicken halves, ribs and chopped Boston butt were on the menu.

“That chicken had such little fat they didn’t even drip on my coals,” said Swicegood. The meat was sourced from Hutchens Homestead and while it was more expensive, he said it was worth the price.

The first day as a truck vendor threw some learning curves at Swicegood such as blowing fuses, when he was preparing to make plates, and an  issue with the gas. Although it caused a late start time for the trailer, he was still able to provide quality meals for the attendees at the New Sarum event.

He thanks the health inspector who worked with him to approve a permit to operate. Other events he plans to attend this fall are Randy’s County Wide Yard Sale on Nov. 9-10 and Rufty- Holmes Oct. 13. 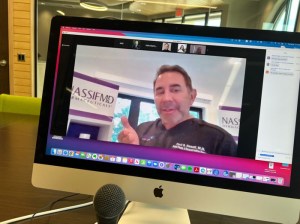 Xccelerated Team Performance, one of the sister companies to Salisbury-based Healthcare Management Consultants, focuses on leadership coaching and team development.

CAPP’s goal is to educate and bridge the gap between medical school education and the practical business knowledge necessary to build and maintain a successful medical practice.

Nassif is a co-host of the E! reality TV series “Botched,” which premiered in 2014 and aired for seven seasons. He has also appeared on E!’s “Dr. 90210” and the first three seasons of “The Real Housewives of Beverly Hills.”

SALISBURY — Over the last 200 years, U.S. life expectancy has more than doubled with vast improvements in health and quality of life. However, while most people imagine medical advancements to be the reason for this increase, the largest gain in life expectancy occurred between 1880 and 1920 due to public health improvements.

A higher level of understanding and implementation of proper cleaning and sanitation practices is what has provided a foundation for this unprecedented increase in life expectancy and quality of life.

Proper Cleaning and sanitation has been recognized as the “greatest medical advancement since 1840” according to the BMJ (formerly the British Medical Journal), and today Professional Cleaning Providers are trained to be preventative healthcare professionals by the American House Cleaners Association. More than ever, professional cleaners across the country are needed to keep homes and businesses clean and safe. All local professional cleaning providers in the community are now to be celebrated on National Professional House Cleaners Day this year which is Sept. 17.

“As a professional cleaning provider in Salisbury, I am extremely honored and proud to serve in the capacity of preventative healthcare,” said Angie Koontz. “The physical, mental, emotional and spiritual health and cleanliness of our community members is very important to me.”

The next unemployment update is scheduled for Sept. 28 when the county unemployment rates for August 2022 will be released.