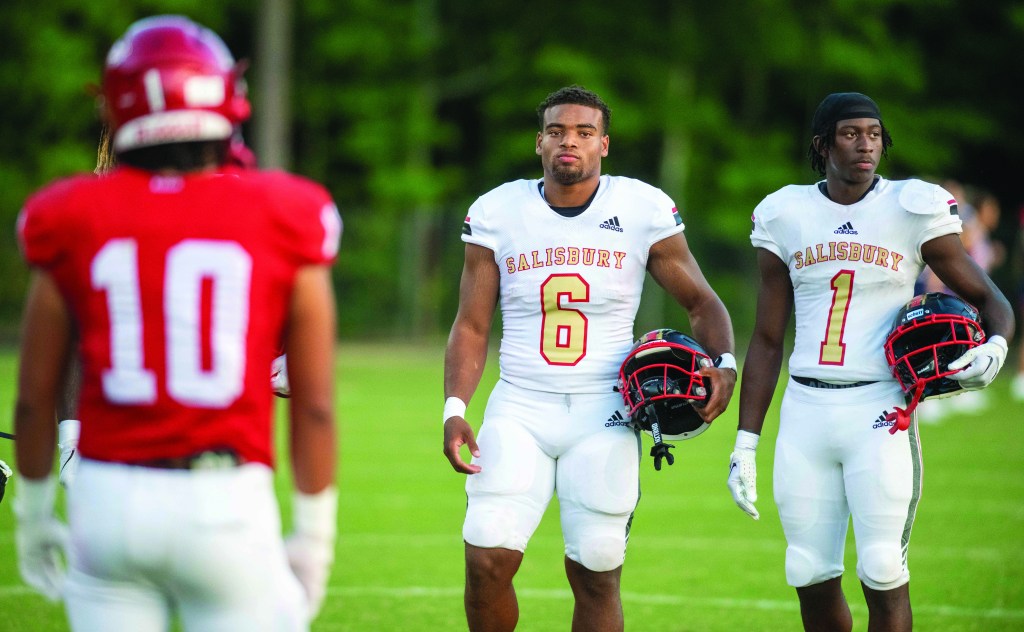 THOMASVILLE — Salisbury is starting to look like Salisbury again.

The Hornets are getting better in a lot of little ways, and they thumped Thomasville 35-12 in an early Central Carolina Conference showdown on Friday.

NASCAR’s Cup Series starts with the Daytona 500. The CCC starts with Salisbury at Thomasville. It’s the same sort of concept.

It was supposed to be tough and the game was well-hyped, but the Hornets made it look relatively easy against a talented and previously undefeated team.

Salisbury (4-1, 1-0) had the Bulldogs on the ropes, waiting to be knocked out, by the middle of the third quarter.

Both teams tacked on a touchdown in the last minute — the Bulldogs actually got one on the final snap, following two untimed downs  — but there was more defense played than it sounds like.

“A lot of new guys are getting accustomed to playing together on our defense,” Salisbury head coach Clayton Trivett said. “And we’ve gotten back to playing Salisbury’s style of defense.”

Dashawn Brown had a whale of a game for the Hornets to lead the defensive effort.

Offensively, the big news for the Hornets was a return to action by running back JyMikaah Wells.

Wells missed the South Rowan romp and all but a couple of plays against East Rowan with a sprained ankle, so he probably lost about 400 yards off his career total.

But he made up for those two lost weeks against Thomasville. His 28 carries for 184 yards dominated the game. With Wells punishing Thomasville defenders, Salisbury could drive it for as long and as far as it needed to.

Jumal Rule was outstanding filling in as the feature back while Wells was out, but Wells is Wells. He’s going to own a lot of school records when he graduates.

“JyMikkah is so explosive, and it was great to have him feeling good again,” Trivett said. “But credit the offensive line for some of those yards. They were the big question mark when this season started, and they’ve come a long way. The biggest improvement in our team the last few weeks has been the offensive line.”

Thomasville has been better in the trenches than it is this season, but the Bulldogs (3-1, 0-1) still present a formidable backfield with running-threat QB Janhri Luckey, Kevin Robinson and Shamon Smith.

Robinson whiled up the middle for a 44-yard run on the opening possession, but the Hornets’ defense came through with a critical stop on fourth down at at the Salisbury 15 when Luckey threw incomplete into the end zone.

“Stopping their first drive was huge,” Trivett said. “A big momentum swing, and we were able to build on it.”

Thomasville started its second possession at the Salisbury 37 after a punt and a face mask penalty on the coverage, but again the Hornets got the stop.

That’s when the Hornets started feeding the ball to Wells.

He had most of the yardage on the Hornets’ first successful  drive and carried the ball to the 2-yard line with a 32-yard burst. Quarterback Mike Geter put it in the end zone from there with 9:48 left in the second quarter. Hank Webb kicked the first of his five PATS, and it was 7-0.

Salisbury got the ball back quickly when the defense forced a three-and-out.

Then, with Thomasville defenders crowding the box and focused on Wells, Deuce Walker sprinted behind the Thomasville defense and ran under a beautifully thrown ball by Geter. That 52-yard touchdown put the Hornets ahead 14-0. They took that lead to the locker room.

Salisbury’s crunching drive to start the second half basically settled the game. The Hornets kept the ball for almost seven minutes. Wells did most of the pounding. Geter got another short TD run to cap the march, and it was 21-0.

“We’re not there yet, we’ve got things to clean up and we’re still getting ourselves in too many first-and-15 and first-and-20 situations with false starts or holding penalties,” Trivett said. “But that was a really good drive coming out of halftime to take control.”

Thomasville got back to 21-6 with two sensational individual plays. Luckey escaped what appeared to be a certain sack by the Hornets and scrambled into Salisbury territory. Then Robinson bolted 42 yards to put the Bulldogs on the scoreboard with 53 seconds left in the third quarter.

Early in the fourth quarter, the Hornets answered with no problem.

Geter’s completion to Nature Smith was good for a first down and it turned into a big play when an unsportsmanlike penalty was tacked on. Wells stampeded 30 yards for the touchdown — the 52nd of his career — that made it 28-6.

Shamon Smith had a 62-yard run for Thomasville, but the Bulldogs came up empty on that opportunity when Anthony Dodd made a fumble recovery at the Salisbury 4.

Rule added a touchdown for the Hornets with 21 seconds left — they weren’t running it up, they were just running up the middle.

Then a determined Luckey scored on the last play for the Bulldogs, after a series of Salisbury penalties.

It was a nice win for Trivett, who was returning to stadium where he played his high school football.

“I know how tough it is to come in here and to win here,” Trivett said. “It’s a good team win. We’ve just got to keep working and keep getting better week by week.”

Thomasville plays at North Rowan next week, while Salisbury is at home against West Davidson.