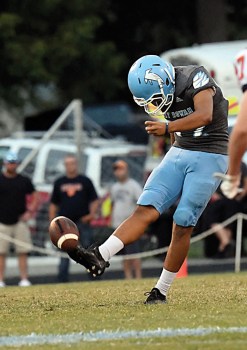 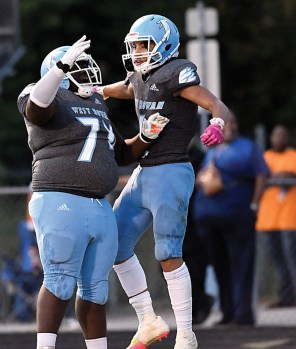 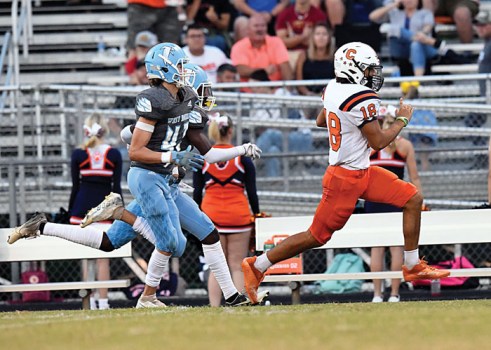 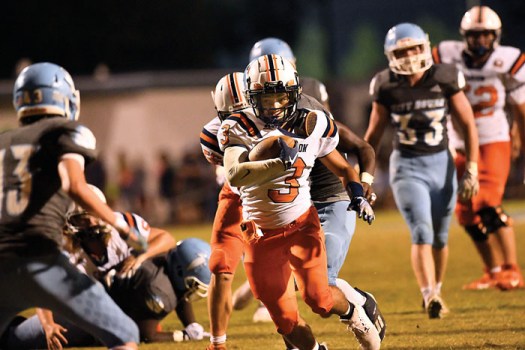 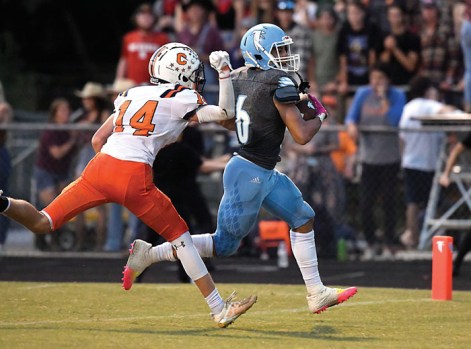 West's Evan Kennedy runs past Carson's Carson Aman on his way to one of his three touchdowns Friday night. photo by Wayne Hinshaw, for the Salisbury Post

MOUNT ULLA — West Rowan may be emerging as the South Piedmont Conference bully, but visiting Carson wasn’t giving up its lunch money without a fight Friday night.

It took a last-minute, 23-yard field goal by Juan Artega for the heavily favored Falcons to prevail 34-31 in a spellbinding league opener for both teams.

“A senior kicker who’s made some big kicks for us,” winning coach Louis Kraft exhaled after West (4-1 overall) won its second straight. “He’s also missed a few in his career, but that was a great moment for him. Tough kick from the left hash, but we had 100 percent confidence in him making that kick. We all felt good about it.”

Artega’s boot — his second field goal of the night — came with just 16.4 seconds remaining and gave West its only lead. The Falcons erased an 11-point halftime deficit and trailed 28-17 entering the fourth quarter.

“We may have come in a little big-headed,” said West quarterback Lucas Graham. “We beat Davie (35-34 in Week 2) and thought Mooresville (a 35-14 loss on Sept. 2) would be our last tough game until the playoffs. We took a good team very lightly. I don’t think anyone expected that.”

Carson (1-4) marked its territory before the game was two minutes old. Defensive end Cody Russell — a team captain who agreed to play both ways this season — opened the scoring when he intercepted a Graham pass and returned it 64 yards for a pick-6.

“Just a mental error by me,” Graham said after passing for 111 yards. “The edge man went back for the pass instead of coming after me. I’ve never seen that before and didn’t adapt very well.”

Before the first period expired, Carson quarterback Michael Guiton (10-for-19, 193 yards) threaded a perfectly placed 25-yard TD pass into the hands of wideout Jay Howard for a 14-3 lead. Second-quarter touchdown runs by West’s Evan Kennedy and Carson’s Jordan Galarza left the guests ahead 21-10 at halftime.

“They did not expect us to come out and play like we did,” said first-year Cougars coach Jonathan Lowe. “For our boys to go toe-to-toe with a team many consider the best in the conference, that’s saying something. We had a great game plan set up and gave it our all. Right now, I wouldn’t want to be the coach of any other team.”

There was more to be proud of as the third quarter ticked to a close. Guiton directed a 56-yard scoring drive and running back Jay McGruder pedaled into the end zone on a 5-yard run that restored Carson’s 11-point advantage.

“They were definitely a better team than we thought,” said West defensive back Aubree Robinson. “We played down to them and made some mistakes we’ll have to fix in practice.”

The Falcons may have found a solution to their running back predicament. With senior Landon Jacobs nursing an ankle injury that rendered him ineffective, sophomore Evan Kennedy — a wide receiver by trade —  was inserted into the West backfield and did not disappoint. He carried 29 times for 130 straight-ahead yards and scored three touchdowns, including one on a 7-yard burst that drew the hosts within 28-23 with 9:48 to play. “Not bad for a receiver,” Kraft smiled afterward. “No. 3’s our regular guy, but he’s got a little injury.”

Carson used a 35-yard field goal by Luis Avilez to fortify its lead before West pulled even with 5:20 remaining. A nine-play, 53-yard touchdown march was capped when Graham scored on a quarterback sneak. His two-point conversion pass to Kennedy tied the score at 31-all.

“I knew when we scored that one, we’d win this game,” said Graham. “It was just a matter of trusting the guys.”

For Lowe and the senior-laden Cougars, it was a night of mixed emotions. “It’s the difference between being hungry and starving,” he said. “We never let up, but in the fourth quarter they made some good plays and converted some third downs.”

For West, that was barely enough. “At the end of the day, the only thing that matters is the win in the left column,” Kraft offered as the crowd thinned out. “Yeah, I would have liked it if we had played better. But we came here to win a game and we accomplished our goal.”

NOTES: Graham surpassed 1,000 yards passing with his final completion — a 30-yard pickup to senior Adrian Stockton midway through the fourth quarter. … Kennedy made a point of crediting his offensive line, anchored by senior Braydon Haglan. “A shout-out to them for everything,” he said. “They gave me the time, gave me the blocking and got me in the end zone.” … Carson finished with a 271-267 edge in total yards. CHS managed only 86 in the second half. … Carson receivers CJ Guida, Howard and Emory Taylor combined for 10 receptions worth 193 yards. … DB Jacob Perry had a second-period interception for West. … Joseph Giles, a senior defensive tackle, was ejected with 1:51 left in the first quarter. … West linebacker Canyon Turner celebrated his 18th birthday. … A few members of West Rowan’s Class of 1972 were on hand as part of their 50th reunion celebration. … The Falcons visit South Rowan next Friday. Carson has the week off before visiting Concord on Sept. 30. 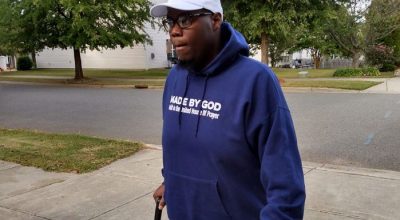