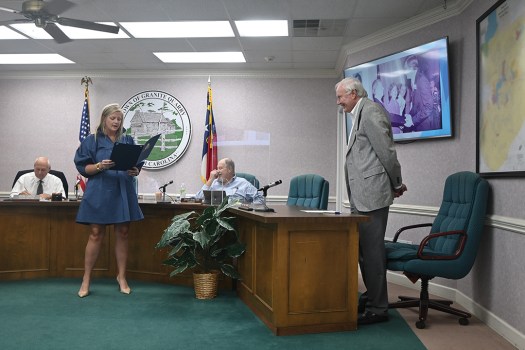 Madeline Wagoner/Salisbury Post — Granite Quarry attorney Carl "Chip" Short (right) has been recognized for his 40 years of service to the town's community. Mayor Brittany Barnhardt (front left) presented a written proclamation in acknowledgment of his duties.

Madeline Wagoner/Salisbury Post — William Kim Cress (left) was recognized for his outstanding service to the town as a fire fighter, board member and maintenance supervisor for Granite Quarry. Mayor Brittany Barnhardt (right) presented him with a plaque of recognition and an embrace. 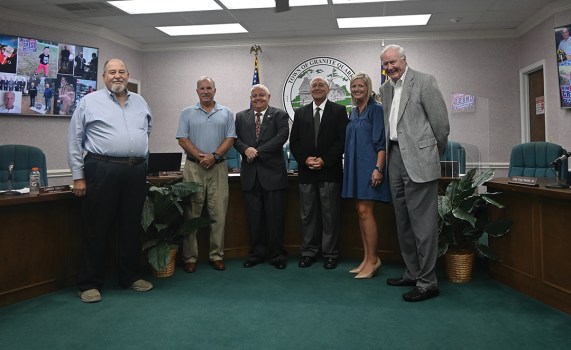 GRANITE QUARRY — Monday night’s Board of Aldermen meeting in Granite Quarry had a surprise for two staff members who have dedicated their service to the betterment of the town.

Carl “Chip” Short, town attorney since Feb. 1 1982, was recognized for his 40 years of advising and counseling for the town board of Granite Quarry.

William Kim Cress has also had quite a track record with the town, serving as a firefighter at Granite Quarry Fire Department for 14 years, holding a seat on the planning board for two years and 19 years as the maintenance supervisor for the town. He held a spot for a short time on the board of aldermen from 1997 to 1998 when there was a vacancy, but resigned after taking the job as maintenance supervisor. After retiring in 2016, he ran again for an alderman position and was sworn in December 2017. Last month marked his last meeting of serving the town as he is moving out of town limits. He has worked for a total of 25 years for the town.

Before getting into the new business of the town, Mayor Brittany Barnhardt had prepared proclamations on behalf of the board and the town staff.

His career has consisted in a wide variety of specialties including corporate, real estate, wills and municipal law. He also has contributed to the community of Granite Quarry by serving clubs, associations, commissions, councils and foundations.

“I have so enjoyed working with people down here in Granite Quarry,” Short said. “It’s been a joy. All of the aldermen and the mayors that I have worked with have put the town first. I think the town is very fortunate to have people serve them that they’ve had. It’s never been a problem. Boy, it went by in a hurry.”

Mayor Barnhardt did some research on the year 1982 to share some fun facts to everyone in attendance about what was hot that year:

• The top song on the radio was “Eye of the Tiger” by Survivor.

• The price of a postage stamp was 20 cents.

Short said he was not expecting the recognition, but was very appreciative for the effort and honor by the staff of Granite Quarry. He has served on 10 different councils.

Kim Cress was then recognized for his service to the municipality.

“It is fitting that the town of Granite Quarry shows its appreciation when one has rendered such valuable services,” Barnhardt said.

The proclamation acknowledged Cress as being a “good, loyal and faithful public servant” to the town of Granite Quarry. It was presented to him while a copy of the document will be kept in the town records for his service.

“It’s been a pleasure,” Cress said. “I’ve got a lot of memories here.”