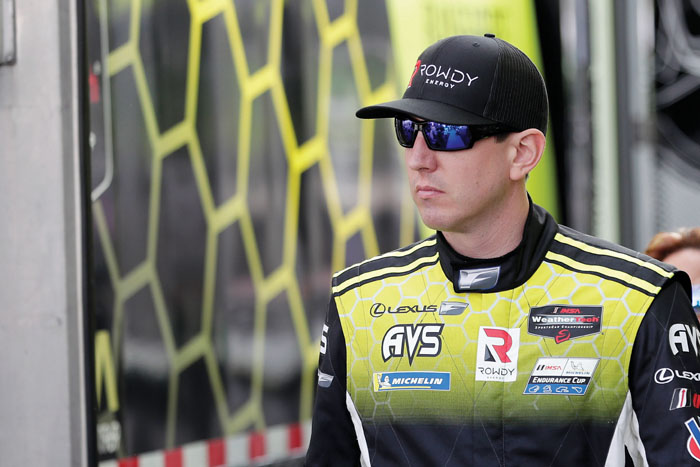 Kyle Busch heads to his garage during testing for a race at Daytona International Speedway in Daytona Beach, Fla., in 2020.(AP Photo/John Raoux, File)

CHARLOTTE — Kyle Busch will move to Richard Childress Racing next season, ending a 15-year career with Joe Gibbs Racing because the team could not come to terms with NASCAR’s only active multiple Cup champion.

Busch will drive the No. 8 Chevrolet for Childress in an announcement made Tuesday at the NASCAR Hall of Fame. He wore the two Cup championship rings he won driving for Gibbs on his middle fingers.

“I’ll be taking my talents to Welcome, North Carolina to drive the No. 8 car starting in 2023,” Busch said of moving to the team based about an hour north of Charlotte.

Tyler Reddick, who is currently competing for the Cup championship in the No. 8 Chevrolet, will remain under contract at RCR and drive for the team next season. Reddick in July told Childress he was moving to 23XI Racing in 2024.

When Childress joined Busch at the announcement, the Hall of Fame team owner presented Busch’s 7-year-old son, Brexton, with a contract option to someday drive for RCR. But before that, Childress handed Busch his “signing bonus,” which was a boxed watch.

Childress in 2011 tussled with Busch after a Truck Series race at Kansas Speedway. The car owner removed his watch and handed it to someone, saying ‘Hold my watch’ before the altercation. Childress was fined $150,000 by NASCAR afterward.

Childress and Busch, now 37 years old, long ago made amends, which helped make RCR a landing spot for Busch during his excruciatingly long free agency period. JGR learned longtime partner Mars Wrigley was leaving the sport at the end of 2022, and Gibbs had been searching for a deep-pocketed sponsor to keep Busch in the No. 18 Toyota.

Busch even said he’d drive for below his market value to get a deal done.

But as the year went on and no progress was made on Busch’s 2023 plans, he was forced to look elsewhere for both his own Cup seat and a landing spot for Kyle Busch Motorsports, his Truck Series team. KBM will now be a Chevrolet organization, but Busch said all details on KBM and how many trucks it fields next year is still being decided.

“Kyle has been a major part of our history and success here at Joe Gibbs Racing. We are thankful for all his contributions to our organization over the years,” Joe Gibbs said in a statement. “When you look at all that he has accomplished already, it is truly remarkable, and we know someday we will be celebrating his Hall of Fame induction.”

The move to RCR and rival Chevrolet is a tremendous blow to Toyota, which has been with Busch since he joined JGR and powered him to all but four of his 60 career Cup wins. Busch is also the winningest driver in the lower-level Xfinity Series and Truck Series, and his KBM truck team is a massive part of Toyota’s dominance in that series.

But Toyota could do nothing to find Busch a slot in its small fleet — JGR and 23XI combine for a Cup Series low six full-time entries — and Busch was able to move to Chevrolet. The manufacturer lauded the driver it considers a future Hall of Famer for all that “one of the greatest drivers in NASCAR history” has accomplished for Toyota.

“We’re disappointed and saddened that his future won’t continue to be with Team Toyota,” the manufacturer said in a statement. “Kyle has been an ambassador for Toyota since joining the program in 2008. He’s gone on to accumulate some of the most prestigious milestones possible for the Toyota brand. He will undoubtedly hold the record for the most wins in a Toyota across all three Championship Series for decades to come.

“But more than that, Kyle has been a friend, part of our family and has played a key role in the development of many of our drivers through his ownership of Kyle Busch Motorsports. We wish nothing but the best for Kyle and his entire family as he moves into the next chapter of his Hall of Fame career. We’re thankful to have been along for the ride.”

Childress said the atmosphere at his shop in Welcome has been electric since rumors started that Busch might move to the organization. He also said when he looks in Busch’s eyes, he sees the same fiery look of competition he once saw in the late Dale Earnhardt.

Earnhardt won six of his seven Cup championships driving for Childress. RCR has not won a Cup title since Earnhardt, but has both Reddick and Austin Dillon, Childress’ grandson, in this year’s playoff field.

But RCR has not won a title since Earnhardt’s final championship in 1994. Reddick, a two-race winner this season, is currently 11th in the playoff standings. Austin Dillon, who won the regular-season finale to snag the final playoff spot, is 14th in the standings as the Cup Series heads into Saturday night’s elimination race at Bristol Motor Speedway.

It was Dillon, Childress said, who encouraged his grandfather to speak to Busch. The move to RCR returns Busch to Chevrolet, the manufacturer he began with when he signed a development driver contract with Hendrick Motorsports when Busch was a teenager. He made his Cup debut as a 19-year-old for Hendrick and won four races over three seasons driving the No. 5 Chevrolet — the number currently used by champion Kyle Larson.

Busch was released from Hendrick at the end of 2007 when Dale Earnhardt Jr. became available and Hendrick could no longer tolerate Busch’s volatile behavior. Gibbs gave Busch a longer leash — Gibbs won three Super Bowls with the Washington Redskins and also employed Hall of Fame driver Tony Stewart — and Busch thanked Gibbs on Tuesday for “being patient with me.”

“You guys took a chance at a kid 15 years ago to let me drive a race car, and we hit the ground running,” Busch said of Gibbs, who allowed “me to be a kid and grow into a man, most days.” 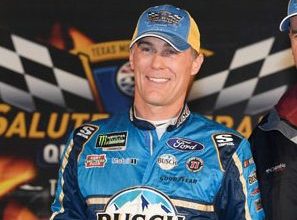