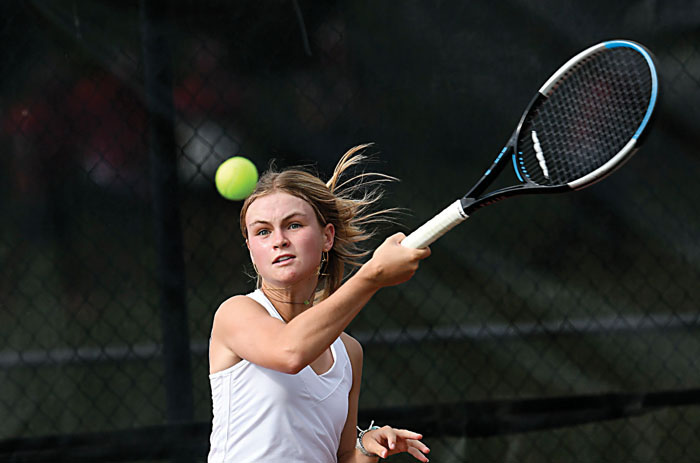 SALISBURY — Gray Stone was expected to provide the toughest opposition for Salisbury’s girls tennis team in the regular season.

The Knights lived up their glowing reputation, but it still was another “90” for the Hornets. That’s tennis shorthand for a 9-0 match.

That’s all the deep Hornets have experienced so far this season. They are 9-0 with nine straight 9-0s.

“Gray Stone is no pushover, they’re one of the best in 1A, and they’re probably the best team we’ve faced so far,” Salisbury coach Milt Griffith said. “Our girls just played very well today. Sometimes they can get a little lax and lose some focus against weaker teams, but that wasn’t the case today. Gray Stone is most definitely strong. They brought out our best.”

Griffith said Kate Burton, a senior, had the best day.

Monday’s matchup was an important test for the Hornets, who aren’t expected to be pushed very often in the Central Carolina Conference.

Only five of the seven CCC schools are fielding girls tennis teams this season. West Davidson is in second place in the CCC and has a 2-5 overall record.

So it was good to get Gray Stone on the schedule. The Knights have beaten several 3A squads that boast winning records.

Salisbury has a much different team than the one that went 19-1 and won three 2A playoff matches last fall.

The biggest loss was Abby Campion, who played No. 2 singles, but the Hornets also lost the Frick twins, Ellison and Emily, who quietly were automatic winners at No. 5 and No. 6.

Millie Wymbs, who played No. 1 singles as a freshman in 2021, is back at the top as a sophomore. Abbey Lawson ( No. 3 to No. 2) and Burton (No. 4 to No. 3) have moved up one notch in the seeds. The bottom three are new — sophomore Lucy Barr, who was a reserve last season, and freshmen Cora Wymbs and Meredith Williams.

“Lucy Barr has improved tremendously and has become a very solid No. 4, and the freshmen are good players,” Griffith said. “(Sisters) Millie and Cora Wymbs have played a lot together and they’ve got some special chemistry and they have a lot of potential as a doubles team.”

Kyna Zaldivar, a senior, has played some No. 3 doubles for the Hornets, but the standard lineup is the one they used on Monday. Addison Griffith and Elizabeth Applewhite round out a nine-person squad.

“High school tennis is all about depth,” Griffith said. “A lot of teams have that good No. 1 and some have a strong No. 2. But we’ve won a lot of matches over the years by being good at 3, 4 and 5 and 6. We’ll have some tough challenges ahead of us this year. We just have to try to keep working and getting a little better every match.”

They did that on Monday.

High School OT ranks Salisbury 18th in the western half of North Carolina. That’s for all classifications. As is always the case, the Hornets are expected to be one of the best teams in 2A.