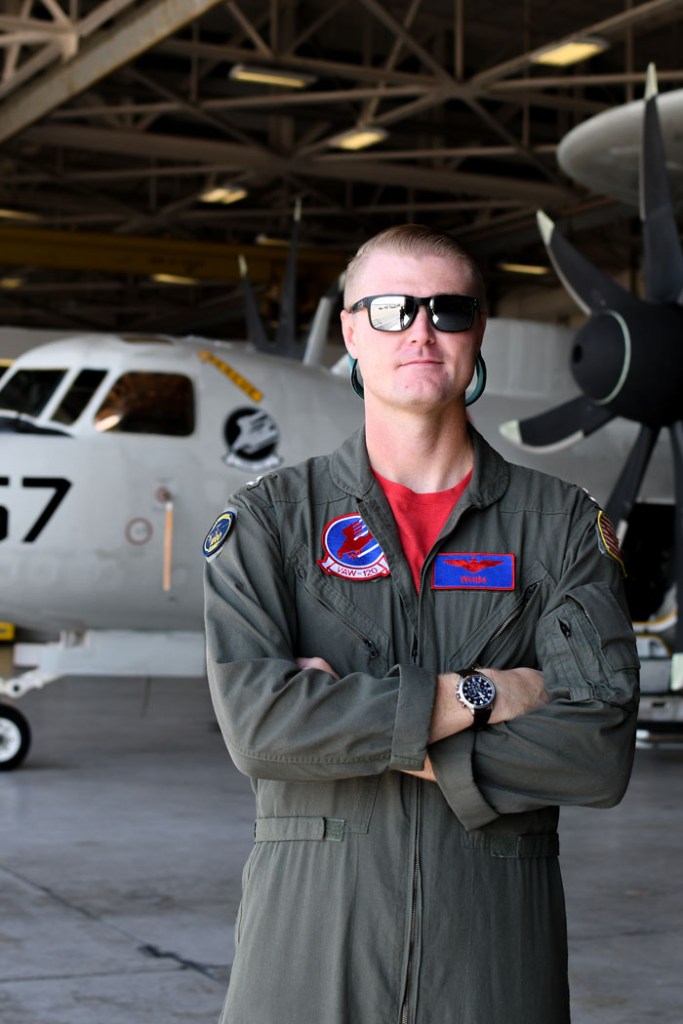 “My grandfather was a naval aviator in WWII, and I wanted to follow in his footsteps as a military pilot,” said Hinson. “He gifted me a VHS of “Top Gun” when l was six years old and that did it for me.”

Growing up in Cleveland, Hinson attended West Rowan High School and graduated in 2008.

“I would like to shout out to Lt. Col. Herman Peterson from Junior Reserve Officers’ Training Corps (JROTC), for teaching me great leadership and hard work and inspiring me to become a Navy pilot,” said Hinson.

Today, Hinson relies upon skills and values similar to those found in Cleveland to succeed in the military.

“I had some great mentors back at home that taught me hard work and leadership,” said Hinson.

These lessons have helped Hinson while serving with the Navy.

The E-2D Advanced Hawkeye recently celebrated the 15th anniversary of its first flight, which occurred Aug. 3, 2007. Known as the Navy’s “digital quarterback,” the Hawkeye gives the warfighter expanded battlespace awareness. The Hawkeye’s command and control capability makes it a multi-mission platform through its ability to coordinate concurrent missions such as airborne strike, land force support, rescue operations and support for drug interdiction operations. The Hawkeye is one of the aircraft launched from an aircraft carrier.

Navy aircraft carriers are designed for a 50-year service life. When the air wing is embarked, the ship carries more than 70 attack fighter jets, helicopters and other aircraft, all of which take off from and land aboard the carrier at sea. With more than 5,000 sailors serving aboard, the aircraft carrier is a self-contained mobile airport.

Aircraft carriers are often the first response to a global crisis because of their ability to operate freely in international waters anywhere on the world’s oceans.

“The aircraft carrier is our U.S. Navy’s centerpiece, our flagship, and a constant reminder to the rest of the world of our enduring maritime presence and influence,” said Rear Adm. James P. Downey, USN, Program Executive Officer (PEO) Aircraft Carriers. “These ships touch every part of our Navy’s mission to project power, ensure sea control and deter our adversaries.”

Serving in the Navy means Hinson is part of a team that is taking on new importance in America’s focus on strengthening alliances, modernizing capabilities, increasing capacities and maintaining military readiness in support of the National Defense Strategy.

“The majority of the earth is ocean and we’re always out there, always ready,” said Hinson. “We have the ability to keep the fight away from home and at the enemy’s doorstep.”

With more than 90% of all trade traveling by sea, and 95% of the world’s international phone and internet traffic carried through fiber optic cables lying on the ocean floor, Navy officials continue to emphasize the importance of accelerating America’s advantage at sea.

“Maintaining the world’s best Navy is an investment in the security and prosperity of the United States, as well as the stability of our world,” said Adm. Mike Gilday, Chief of Naval Operations. “The U.S. Navy — forward deployed and integrated with all elements of national power — deters conflict, strengthens our alliances and partnerships, and guarantees free and open access to the world’s oceans. As the United States responds to the security environment through integrated deterrence, our Navy must continue to deploy forward and campaign with a ready, capable, combat-credible fleet.”

Hinson and the sailors they serve with have many opportunities to achieve accomplishments during their military service.

“I’m proud of flying in Afghanistan during Operation Freedom Sentinel,” said Hinson. “As a junior aircraft commander, I was in charge of four aircrewmen. I was being trusted to fly and take these people into combat.”

As Hinson and other sailors continue to train and perform missions, they take pride in serving their country in the United States Navy.

“Serving means having an incredible opportunity to do and see things that others don’t get to do,” added Hinson. “It’s being on the leading edge of the nation’s defense.”