SALISBURY — The N.C. Chamber announced 31 semifinalists for the Coolest Thing Made in N.C., and Cheerwine is one of 15 honorees in the medium-to-large business category.

Semifinal voting is available visiting coolestthingmadeinnc.com and clicking on “Voting” from the menu. Voting closes Sept. 16.

Founded in Salisbury in 1917, Cheerwine is the oldest continuing soft drink company still operated by the same family. It was created by Lewis Peeler and is now run by his great-grandson, Cliff Ritchie.

KANNAPOLIS — With more than 20 million square feet of developments under construction or proposed in Rowan County, hard hats will be part of many wardrobes in the coming years. Much of that construction is now underway in Kannapolis.

At the Lakeshore Corporate Park, the former site of the Kannapolis Intimidators Stadium, demolition of the stadium is underway. All buildings, stadium structures and the playing field have been demolished. 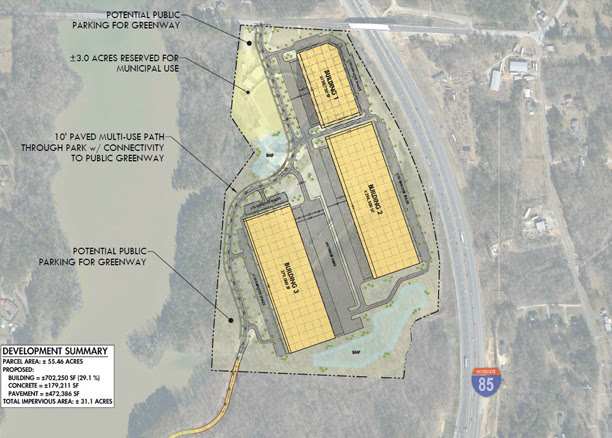 Mass grading and tree clearing have commenced, and the official groundbreaking will take place at 9:30 a.m. on October 13. Lakeshore will feature three buildings ranging from 128,750 to 294,500 sf adjacent to I-85 at Exit 63.

At Overlook 85, Hudson Capital anticipates starting the grading process by early October. Located along Rowan’s newest I-85 exit at Old Beatty Ford Road (Exit 65), Overlook 85’s first speculative/build-to-suit opportunity will be approximately 730,000 sf, with up to 4 million sf of development possible in total.

“We are excited to see new projects progress in Kannapolis and bring employment opportunities to the region,” said Irene Sacks, Director of Economic & Community Development for the City of Kannapolis. “Rowan County is growing and thriving, and we’re glad to be a part of that.”

Rowan County continues to rate as more affordable than the national and area averages, per 2022 Q2 data released by the Council for Community and Economic Research.

In its cost breakdown, Salisbury is rated at the exact national average in groceries, but more affordable in housing (81.8), transportation (88.6), healthcare (94.6), utilities (95.5) and miscellaneous goods and services (98.7).

“Once again, this data shows that Rowan County is an ideal place to live,” said Rowan EDC President Rod Crider. “With easy access to the bigger cities at a more affordable price tag, Rowan offers the best of both worlds.”

It is the business featured at the Rowan Chamber of Commerce’s Business After Hours at 5 p.m. Monday. Professionals can discuss and share ideas in a relaxed, social atmosphere while learning about other member businesses.

Brandon McNeely, owner of Blue Collar Cycle, is a heart transplant and cancer survivor who has a real passion for helping the community. They have been in business for three years and they have held several fund raisers for veterans, organ donors and toy drives.