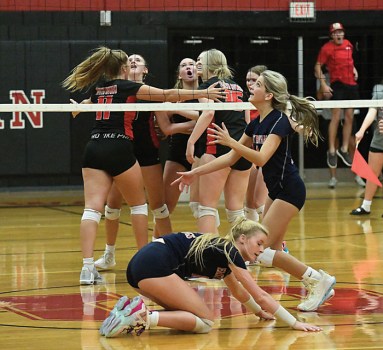 South players celebrate during the victory over East on Wednesday. Photo by Wayne Hinshaw, for the Salisbury Post 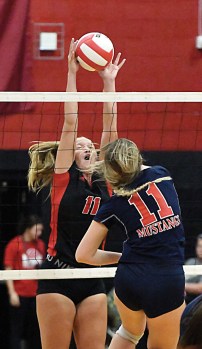 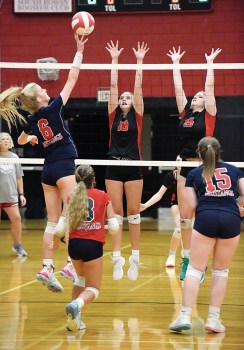 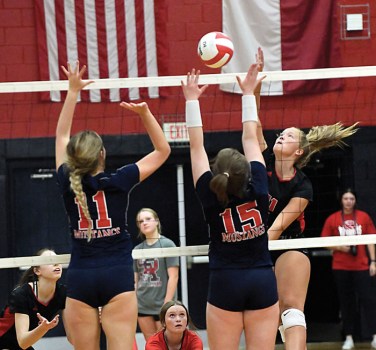 LANDIS— It’s not how many points you score, it’s when you score them.

The Raiders don’t lose often at home. They found a way not to lose this one. They went haywire for a while, but then they found the right formula again.

“We kind of fell apart for two sets,” winning coach Jenna Horne said. “Nothing was falling our way for a while off the blocks and we got down a little bit. We got behind in the fifth set, but when we had to, we got the momentum back on our side, and we did it.”

Avery Welch and Meredith Faw had key kills for the Raiders.

Leah Rymer and Laney Beaver made the decisions and the sets.

Laurel Everett came through with some big blocks.

“You hate to single out anyone, because it really did take every one of them,” Horne said. “We don’t win matches without everyone contributing —  that’s the nature of our team this year. We can’t depend on one or two standouts to take over. It has to everyone together. We have to fight for every point, but these girls have shown they will fight. Even the match we lost, in five sets to Hickory Ridge, they fought as hard as they could fight.”

South is always good in volleyball and was expected to be good again, but not this good.

South subtracted a lot from a good team, while East has a lot of seniors and a lot of talent.

East swept Carson in the first big SPC county matchup of the season. This was the second key matchup. There will be quite a few more.

It will get really intense on Monday when East takes on defending champ West Rowan, while South battles Carson.

“This keeps us right up there and hopefully we can keep surprising people and stay in the race all season,” Horne  said. “The girls showed up today. Lots of heart and lots of fight. I’m really proud. It’s a great win for us.”

East’s senior libero Riley Hill, a Catawba recruit, racked up the 1,000th dig of her career.