College football previews: All eyes on Hartman’s return as Wake takes on Vandy 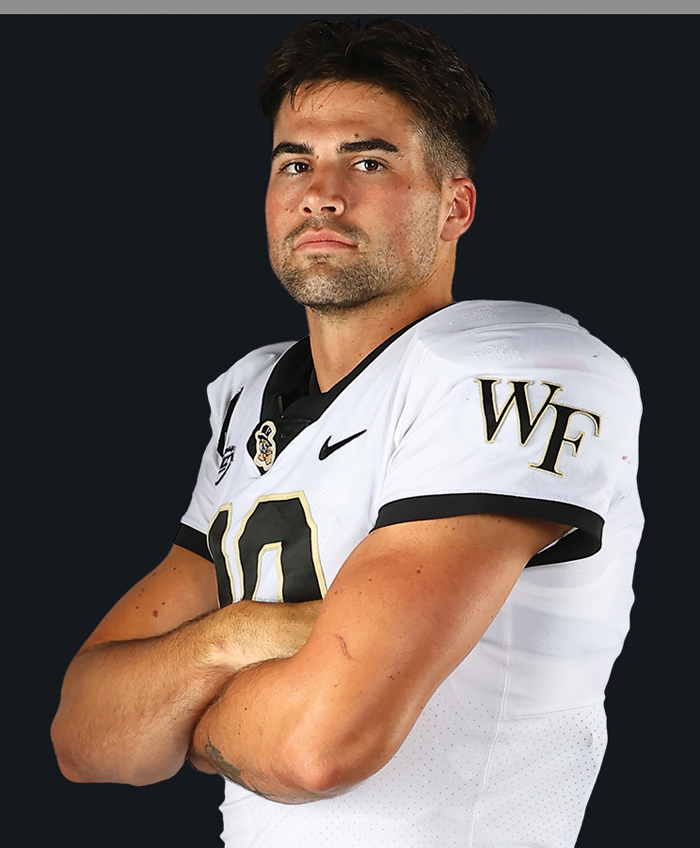 Wake Forest University photo — Sam Hartman has been out due to a blood clot near his collarbone.

Wake Forest’s time without star quarterback Sam Hartman turned out to be short. The question now for the 23rd-ranked Demon Deacons heading into Saturday’s trip to Vanderbilt is how long it takes their offense to find last season’s high-efficiency and prolific form.

The Demon Deacons (1-0) beat VMI last week with Hartman out due to a blood clot near the collarbone that had sidelined him indefinitely, leaving Mitch Griffis to earn the win in his first career start. But the school announced Tuesday that Hartman had been medically cleared to return and he was back atop the depth chart for the trip to face the Commodores (2-0), enough to swing the point spread

“We’re getting back our captain and one of our best leaders that we’ve ever had here, and a really good football player,” coach Dave Clawson said. “I think more than anything they’re just happy for him because they know how important it is to him.”

Hartman guided the Demon Deacons to 11 wins and a trip to the Atlantic Coast Conference championship game last year, leading an offense that ranked among the best in the Bowl Subdivision ranks. Hartman’s play was also a key reason why Wake Forest cracked the top 10 of the AP Top 25 last year, too.

“We’re all juiced up for it,” linebacker Ryan Smenda Jr. said.

The Commodores, off to a 2-0 start for the first time since 2018, rolled past Hawaii 63-10 in their opener. But coach Clark Lea wasn’t happy with how his Commodores cruised to the finish of last week’s 42-31 win against Elon and sees that as another area for growth.

“This is a great opportunity for us to go against the program that’s kind of set the standard here recently with respect to balancing being a great academic school and playing high-level college football,” Lea said. “For us, we’re still so young as a program and I think the first two games are indicative of this.”

Things to know about Saturday’s game:

This starts a tough stretch for Vanderbilt leading into Southeastern Conference play.

The Commodores are the only FBS team scheduled to play three straight games against teams that played for their conference title last season. Next up is a game against reigning Mid-American Conference champion Northern Illinois before opening league play against No. 1 Alabama.

Vanderbilt is among 11 teams with at least five opponents from the preseason AP Top 25.

Having a game in hand on the rest of the SEC certainly helps, but Vanderbilt currently leads the league by averaging 512.5 total yards while ranking third in scoring at 52.5 points.

Vanderbilt has scored 105 points, which it didn’t reach until the second quarter of its eighth game last season. The Commodores have scored 42 points in consecutive games for the first time since 2005.

Third-year quarterback Mike Wright, named the starter at SEC media days in July, has been a big key. He already has combined for 10 touchdowns, topping the nine he scored last season.

Smenda didn’t play last week because he was serving a one-game suspension after picking up his third targeting call last year in the Gator Bowl win against Rutgers. The fifth-year linebacker will make his season debut in this one and entered the year as the team’s leading career tackler (238).

Clawson was clearly irritated by the “awful” penalties from the opener against VMI, which included flags that negated an offensive and defensive touchdown. Wake Forest finished with seven penalties for 69 yards.

“In a lot of ways it’s an ideal opener,” Clawson said of the win against the Keydets of the Championship Subdivision. “We won the game and we got to play a lot of different people. And yet there were a lot of teachable moments that we have to get corrected as we step up the level of play.”

Line: Wake Forest by 131/2, according to FanDuel Sportsbook.

RALEIGH — North Carolina State coach Dave Doeren shouldn’t have to worry about motivation for his 18th-ranked team this weekend. That’s because the Wolfpack players barely averted an upset loss and have a long list of improvements for Saturday’s home debut against Charleston Southern.

N.C. State (1-0) survived its opener on the road at East Carolina, though only after the Pirates missed two critical late kicks that could’ve sent the Wolfpack home from Greenville with a deflating loss. The Wolfpack fell five spots in this week’s AP Top 25 as a result, with Doeren saying his team will have to embrace the pressure that comes with “playing from the ranked position.”

“In a lot of ways, it didn’t feel like a win obviously because of our second-half performance,” he said. “But I do think it’s a blessing in my opinion to have a chance to learn such a great lesson but not have a loss next to your record to do it.”

There were multiple issues, too. The offense led by preseason Atlantic Coast Conference player of the year Devin Leary sputtered after halftime and managed 25 fourth-quarter yards. The Wolfpack came up empty despite six goal-line plays with no points to show for it in the third quarter. And the defense tackled poorly most of the day.

“We came out lucky with a win, but we’ve got to just fix it and practice hard,” receiver Keyon Lesane said. “That’s what I came out of Saturday with, that I’ve just got to practice harder.”

Charleston Southern (0-1) had a bumpy start to the season, surrendering 52 points in a home loss to Western Carolina last week. The Championship Subdivision program from the Big South Conference has never beaten a Bowl Subdivision opponent.

“It’s about our process, our preparation, our championship habits,” Buccaneers coach Autry Denson said. “We’re never worried about who we’re playing. We’re trying to play to our standard.”

N.C. State’s six goal-line plays resulted in a lost fumble by Jordan Houston and a turnover on downs when physical runner Demie Sumo-Karngbaye was stuffed four straight times from the 1-yard line.

The Wolfpack lost tight end Trent Pennix to an apparent left arm injury in the East Carolina game and won’t have him for 4-6 weeks. Linebacker Payton Wilson, who missed most of last year with injury, exited the ECU win early with an upper-body injury and is considered day to day.

N.C. State backup quarterback Jack Chambers is a graduate transfer from Charleston Southern, where he was a two-time captain and second-team all-conference pick last year.

Charleston Southern is 0-25 against FBS opponents and 0-15 against teams from the Power Five conferences. The Buccaneers are facing a team that has gone 9-0 against FCS teams and 9-0 in home openers under Doeren.

UNC on road at Georgia State

North Carolina needs to get its defensive act together after surrendering 40 points in the fourth quarter of last weekend’s 63-61 victory over Appalachian State.

Georgia State has an experienced offense that can cause some problems. The Panthers are hosting a Power Five team for the first time. They are eager for a big victory in front of their home crowd to show how far the program has come during its 13-year existence.

North Carolina QB Drake Maye vs. the Georgia State secondary. In his first two games as the Tar Heels starter, Maye threw nine touchdown passes with no interceptions. The Panthers are led by CB Quavian White, who had two interceptions, two tackles for losses including a sack, a pass breakup and five tackles in a season-opening loss to South Carolina. White now shares the school record for career interceptions with nine.

North Carolina WR Kobe Paysour. The second-year player helped fill the void with top receiver Josh Downs sidelined in last week’s win at Appalachian State. Paysour finished with eight catches for 92 yards and a touchdown. If Downs is sidelined again, Paysour could have another prominent role.

Georgia State RBs Tucker Gregg and Jamyest Williams. The duo both rank among the top seven career rushers in school history. Since the start of the 2020 season, Gregg and Williams combined for 1,812 yards and 18 touchdowns last season.

The Tar Heels won last year’s meeting against the Panthers 59-17 in Chapel Hill.

Line: North Carolina by 71/2, according to FanDuel Sportsbook.

Both teams are looking to build on promising openers. Duke rolled over Temple 30-0 last week in coach Mike Elko’s debut — the Blue Devils’ first shutout since 2015 and their first against a Bowl Subdivision opponent since beating rival North Carolina 41-0 on the road in 1989 under Steve Spurrier. Northwestern rallied to beat Nebraska 31-28 two weeks ago.

In the past four years,  the Wildcats  have gone from winning the Big Ten West in 2018 and finishing last in 2019 to winning the division in 2020 and dropping to the bottom again in 2021.

Duke has won three straight in the series since Northwestern’s victory at Ryan Field in 2016.

Line: Northwestern by 9½, according to FanDuel Sportsbook.

The Aggies got a 31-0 victory over FCS school Sam Houston last week, but are looking to clean some things up and play more consistently Saturday. Appalachian State will try to bounce back after losing a 63-61 thriller to North Carolina in its opener.

QB Chase Brice threw for a career-high 361 yards and set a school record with six touchdown passes, including four in the fourth quarter against North Carolina. Now he’ll face a secondary that allowed just 91 yards passing with an interception in the opener.

Line: Texas A&M by 181/2, according to FanDuel Sportsbook.