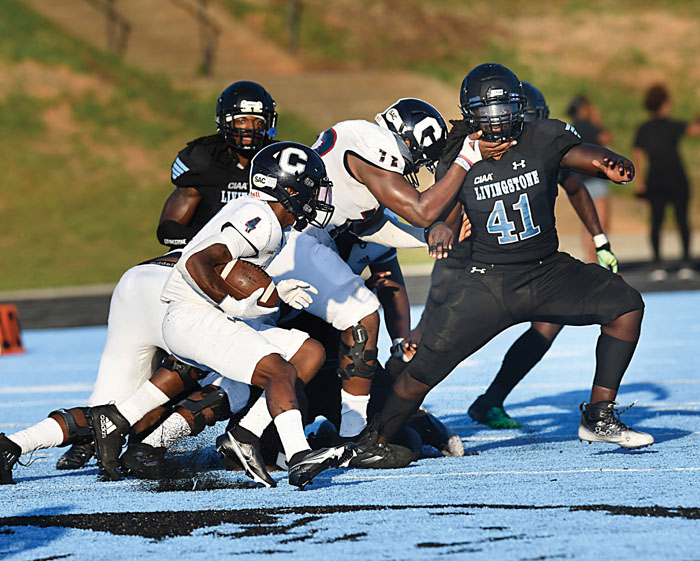 SALISBURY— You can’t win them all unless you win the first one.

Coaches love to say that.

Catawba’s football team has won the first one, 44-19 over Livingstone, and now head coach Curtis Walker, the staff and the players move on to this week’s challenge.

Part of the challenge for Catawba will be the road trip. Getting to Rome, the one in Georgia, not the one in Italy, will mean traveling 339 miles, mostly south, but also west.

Waiting at the end of the trip for one of Catawba’s longer football expeditions will be the Shorter University Hawks, an unfamiliar foe that is one of the lesser football powers in a familiar conference.

Catawba fans know all about the Gulf South Conference. There have been some legendary games against Valdosta State, West Georgia, Delta State, and so on.

Kickoff on Saturday is at noon. WSAT will broadcast the action, with Ken Anderson handling play-by-play duties.

Shorter is favored by about a touchdown, according to the analysts. Analysts tend to underrate Catawba, so we’ll see how it goes.

The Hawks are 1-0. They are excited. They have a new coach, former Hawk Zach Morrison, who played on the offensive line when Shorter started the program in 2005.

The Hawks clobbered Brevard 45-6 on opening day, but they were supposed to clobber Brevard, which now competes in the Division III ranks.

As is the case with the Catawba Indians, the jury is still out on the Shorter Hawks.

Shorter did whatever it wanted to do against Brevard, offensively, massive rushing yards and four touchdown passes. The Indians will try hard to stop the run. Stop the run, and you can usually bring the heat with the pass rush.

Catawba wasn’t perfect against Livingstone, but it was mostly good news. The Indians started slow and didn’t finish great, but in between they had a 44-0 run, and you’re going to win when that happens. Catawba was at its best in the third quarter, following the halftime adjustments.

Defensively, the Indians gave up a ton of passing yards, but only one TD while it mattered. Catawba racked up five sacks against the Blue Bears and benefited from a pick-six by South Atlantic Conference Defensive Player of the Week Christian Campbell.

On special teams, the Indians blocked a field goal at a key point in the game, and Clayton Crile, an All-America candidate, should give Catawba a kicking/punting advantage on the opponent just about every week. Crile punts it 46 yards. When the opponent is punting it 32 yards, well, that adds up over the course of a game.

Offensively, Catawba went with a run-heavy game plan against Livingstone to take pressure off young quarterback Kam Hill. The offensive line and a committee of backs made it work. Hill chipped in two TD tosses and managed the game really well for a true freshman.

How long Ridge Jacobs, the South Florida transfer who was projected to be Catawba’s starting QB, will be out is hard to say. Sprained ankles, especially the high ones, can be trouble.

The new scoreboard displayed  a 44-19 loss to Catawba with the Mayor’s Cup at stake, but otherwise it was a positive start for the Blue Bears.

Livingstone has good reason to be excited about freshman quarterback Silas Cruse. He’s 6-foot-6, and he can sling it. He rifled three touchdown passes, with two winding up in the hands of Lisarton Bryant.

The bad news? Way too many Blue Bear penalties — 15 for 110 yards — in the emotional contest. Livingstone didn’t run the ball effectively, and while defense is expected to be the Blue Bears’ strong suit, they didn’t stop the run, either.

It’s a long trip for LC,  but more of a neutral site game than a true road game. The teams will clash at the Rocky Mount Sports Complex in an event billed as the 25th annual Down East Classic.

Analysts have made Elizabeth City State’s Vikings a one-point favorite, so it’s obviously a tossup game and a very winnable one for the Blue Bears.

Elizabeth City State scared no one in a 58-14 loss to Benedict in Columbia, S.C., last week. It was 58-7 before the Vikings added a late score.

The Vikings surrendered a whopping 550 yards to Benedict, got a punt blocked and went 0-for-10 on third-down conversions.

Those stats make you optimistic if you are a fan of the Blue Bears.