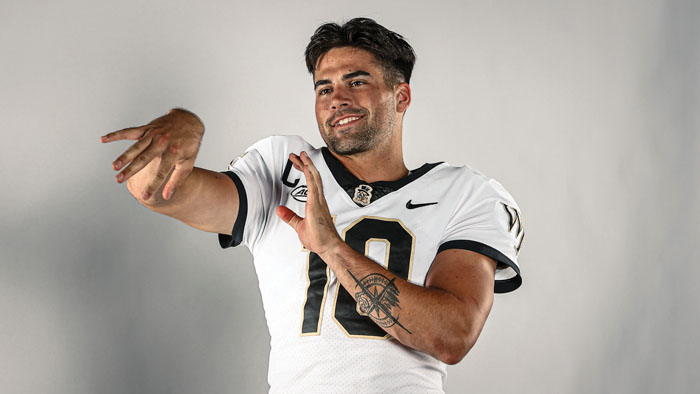 Wake Forest ultimately had to go just one game without star Sam Hartman.

The school said Tuesday that the fifth-year quarterback has been medically cleared to play in the 23rd-ranked Demon Deacons’ trip to Vanderbilt this weekend after receiving treatment for a blood clot. The news came roughly a month since Wake Forest said Hartman would be out indefinitely due to what it described at the time only as a non-football medical issue.

Tuesday’s statement included details on Hartman’s condition, treatment and recovery. He missed last week’s opener against VMI, but coach Dave Clawson said he had been throwing and practiced both Sunday and Tuesday.

“He’s in shape,” Clawson said during his weekly news conference. “He wasn’t completely idle during this time. He’s been throwing the ball for awhile. I mean, there’s just so many accumulated reps. And he got right back on the bike. He’s looked really good, and if we had concerns about that, we wouldn’t be starting him.”

Hartman was ranked as one of the nation’s top quarterbacks last season for a team that reached the Atlantic Coast Conference championship game.

“There will be time for me to tell my complete story,” Hartman said in a statement Tuesday, “but right now I am just really excited to get back on the field with my teammates and compete each day to help our team get ready for Vanderbilt this Saturday in Nashville.”

In a statement, Julie A. Freischlag, the dean of the Wake Forest’s medical school and a vascular surgeon, said Hartman developed the clot in the subclavian vein, located near the collarbone. It’s known as Paget-Schroetter syndrome, or “effort thrombosis,” and Freischlag said doctors believe it was caused by a previous infection that eventually led to inflammation.

Hartman had a procedure Aug. 9 to remove the clot, as well as surgery to eliminate pressure in the vein and dilate it.

Freischlag said a follow-up ultrasound showed “the clot was gone, the blood flow was good and he felt great. Blood thinner therapies were discontinued once they became medically unnecessary and he is medically cleared to return to full competition.”

Hartman led last season’s Demon Deacons to 11 wins, tying a program record and claiming the ACC’s Atlantic Division title. He ranked among the nation’s most prolific passers in an offense that ranked near the top of the Bowl Subdivision ranks.

He missed last week’s opener against VMI, with Mitch Griffis throwing for three touchdowns in his starting debut. Hartman watched from the sideline.

Now he’s back atop the depth chart in time for the trip to play the Commodores of the Southeastern Conference.