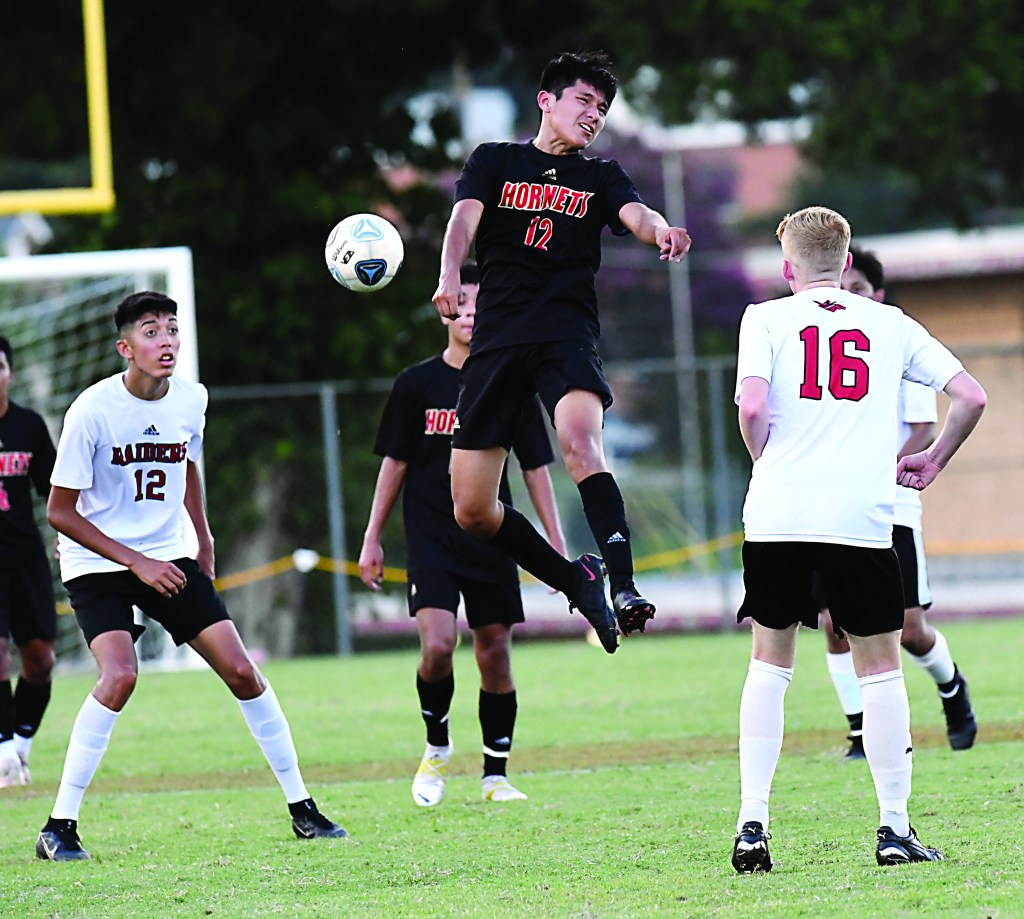 Leonardo Fragoso for the Hornets . Photo by Wayne Hinshaw, for the Salisbury Post

Salisbury’s boys soccer team improved to 5-2 overall and 1-0 in the Central Carolina Conference with a 9-0 win over Thomasville on Wednesday.

Salisbury got contributions across the board, from first-timers to first goals of the season.

Steven Zepeda opened the scoring for the Hornets with his first goal of the campaign.

Sophomore David Austin found the back of the net next on an assist by Busby.

Yatti Avilez scored his first goal of the year from a ball delivered by Leonardo Fragoso.

Midfielder Carlos Henriquez scored his first goal of the year on another Busby assist.

Junior Jonathan Flores scored his first career goal on an assist from Ethan Ott to finish the scoring.

Christopher Beltran Alveno and Finn Avery combined for the shutout in goal.

Up next for the Hornets is a pivotal early season CCC matchup versus West Davidson. SHS finally returns home after a two-week absence from Ludwig Stadium for that matchup on Monday night.

Grayson Steedley had a hat trick for South Rowan in a 7-3 non-conference win against Lexington.

Martin Ramirez with a brace scored twice, while Michael Coles and Brian Robles added a goal each.

Ozzy Pulido had three assists. Steedley, Ramirez, Jacill Gutierrez and Lenny Lorenzo had one each.

Jose Hernandez made 10 saves for the Falcons.

Maynors Bonilla and Zack Foster scored a goal each and North benefited from an own goal.

• The Hornets (8-0) added a 9-0 non-conference win against East Rowan on Wednesday.

Salisbury used the same lineup, with the exception of Burton teaming with Williams at No. 3 doubles.

Millie Wymbs won 6-3, 6-1 against East’s Audrey Ward at No. 1 singles in the closest match.

Ward won at No. 1 singles for East and teamed with  Jaylen Jones to win at No. 1 doubles.

Madison Lowery (South Rowan) was the USA Runner of the Week.

Lowery and Trent Rivers (South Rowan) were the top runners for Pfeiffer in the cross country program’s opening meet.

Ramirez won the  Fleet Feet Invitational  in 25:34.5 and led Catawba to second place.

He had 11 saves in wins against Barton and Belmont Abbey.

Salem opened with a 3-1 over Johnson & Wales.

Kelcie Love (West Rowan) had 11 kills and Kary Hales (Carson) had eight digs in Catawba’s 3-0 loss to Charleston on Wednesday.

The McCanless Couples played a Captain’s Choice on Sunday in terrific weather.

Pam Carver had longest putt,  while  Honeycutt  had closest to the pin.

Keith Knight made a  hole-in-one on No. 17 at the Country Club of Salisbury while competing in the Labor Day Four-Ball Tournament.

Knight made the ace  with a 7-wood. He was playing with Mark Matney.