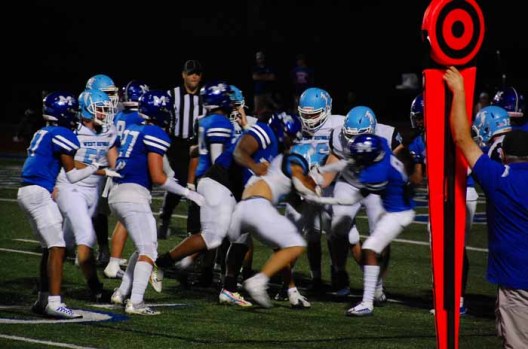 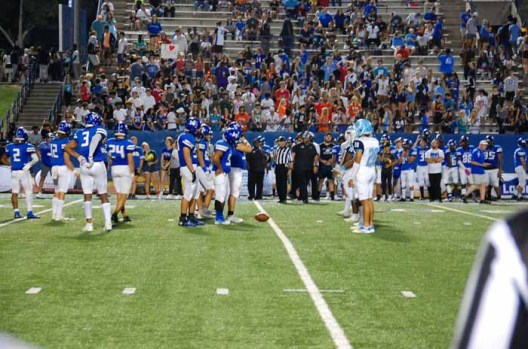 Mooresville came out strong in the second half and topped West Rowan on Friday night. Robert Coleman/For the Salisbury Post 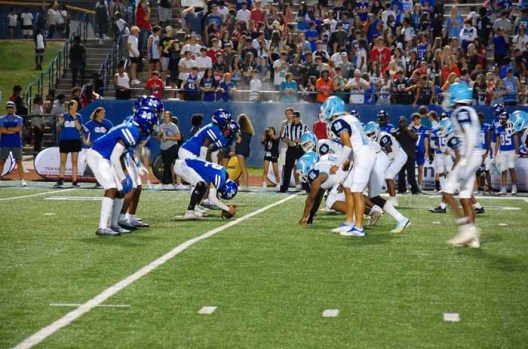 Mooresville lines up for a punt Friday night. Robert Coleman/For the Salisbury Post

Cromartie’s 89-yard burst of speed up the middle of the field was the single biggest play on Friday in Mooresville’s 35-14 win over West Rowan at Joe Popp Stadium.

The Falcons (2-1), dazzling offensively in their first two games, were goose-egged in the second half.

West quarterback Lucas Graham threw for huge yards again (301 of them), but the tradeoff was four interceptions by the Blue Devils (2-1).

Mooresville was able to stuff West’s physical running game, and then was able to bring a lot of heat on Graham.

West’s power back Landon Jacobs topped 100 yards in West’s victories against Salisbury and Davie to begin the season. He had 18 for 38 on Friday. Eleven of those 18 runs were no-gains or TFLs.

Mooresville rolled to a touchdown on its first possession. Howell broke loose on a fourth-and-1 play from the West 18.

In early trouble inside its 10-yard line. West got a couple of breaks — two key receptions on tipped balls. Paxton Greene’s 53-yard deflected catch got the Falcons moving and Adrian Stockton out-jumped defenders for a 26-yard touchdown and a 7-all tie.

Mooresville scored in the first minute of the second quarter.

West came right back, with Evan Kennedy turning a pass over the middle into a 64-yard sprint to the end zone. Juan Arteaga’s PAT made it 14-all with 9:54 left in the second quarter, but the Falcons wouldn’t score again.

It got wild in the final minute of the first half. West had a field goal blocked, and Mooresville scooped it for a long return.

Lee Vaughters intercepted a pass to stop the Blue Devils. Then Mooresville got a pick to close the half.

West had a meager 9 rushing yards at halftime, but was still very much in the game.

Even after that kickoff return to begin the second half put the Falcons down 28-14, they had a fighting chance.

The beginning of the end was a determined West push that moved the ball all the way down to the Mooresville 2. But Mooresville blew up two straight running plays for the stop.

Then the Falcons’ defense had Mooresville contained, but an unsportsmanlike flag kept the Blue Devils’ offense on the field.

When Mooresville cashed in on that penalty for a Westmoreland 16-yard TD for a 35-14 lead, it was all over.

There was a lot of time left, but there no longer was any doubt about the outcome.

Now West has to regroup.

Undefeated North Rowan comes to Mount Ulla on Friday for West’s home opener. West beat North in a thriller in 2021.