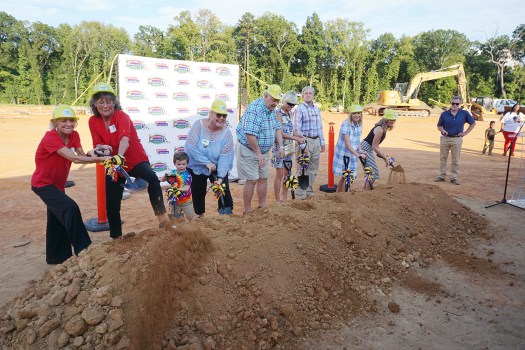 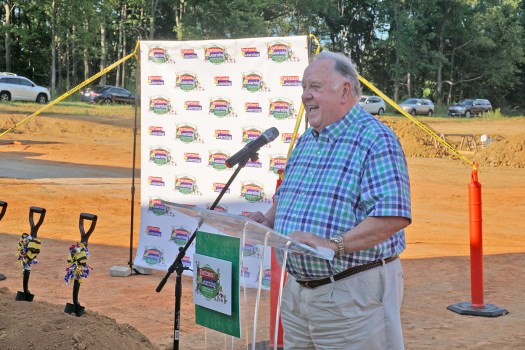 Submitted photo - Gerry Wood speaking at the groundbreaking. The Woods donated the parcel of land that will host the facility.

SALISBURY — On a hot Monday afternoon, a large crowd gathered on the recently cleared land of the future home of Partners in Learning’s new center to celebrate the groundbreaking of the new facility.

Partners in Learning has been on the journey to build this new facility for over two years, and during that time frame it has raised 10.6 million dollars towards its 12 million dollar goal.

The celebration included not only donors, community partners, and public officials but also the families who will be served at the new facility and their teachers.

“I’m so full of gratitude,” said Celia Jarrett, board chair of Partners in Learning.

“I think about my mother (Shirley Ritchie), one of the founders, and how the people of this community have fulfilled her dream of what could be done for our children and families,” Jarrett said. “And I’m just so thankful. We have been welcomed at every door we knocked on. And people have been wanting to hear our story and learn about the needs in our county, and they’ve stepped up and they’re walking with us the whole way.”

Bill Wagoner who serves as the project manager for the future center was excited to finally have a crowd gathered who could see the fruits of their labor behind the scenes throughout the past two years. Wagoner has a grandchild with special needs and with Executive Director Norma Honeycutt’s leadership, they “took him in when he was 30 days old and took him through age five. And it was a miracle education for a little boy who really needed something special.”

According to Wagoner, by Sept. 26 the whole concrete slab will be finished and the floors in the entire building. Between early October and before Thanksgiving, all the structural steel will be up with the framing to get a sense of the magnitude of the building. The roofing will be on by Christmas and the exterior walls and parking will be done in the spring. On August 10 of next year, the construction will be finished, and furniture will begin to be moved in and teachers will be trained. This time next year, students will be in the building learning.

Some excitement was stirred during the groundbreaking ceremony when Gerry Wood stepped up to the microphone and announced he and his wife Brenda are pledging $100,000 as a matching donation towards the project.

“I challenge each and every one of you here tonight to go out into our community and sing the praises of Partners in Learning because one of the problems we’ve got is this is one of the best kept secrets in Rowan County and this whole area.” He said that there’s a catch. “That’s match money for any new fresh donations that come in between right now and the end of September.” Those interested in making a donation towards the campaign should contact Amy Vestal atamy@epartnersinlearning.org, 336-244-6342, or do so online at epartnersinlearning.org/support-pil/capital-campaign.

Honeycutt, Executive Director of Partners in Learning, made a speech during the celebration and touched on the strong roots that Partners is build in the community over the past 26 years.

In addition to donating towards the capital campaign, the public can also purchase bricks by donating $250. By doing so, they will become a part of Partners in Learning’s 25+ year legacy with a commemorative brick that will be featured in a special walkway at the new site. It’s the perfect way to memorialize a past student, beloved teacher, loved one, or someone who has a passion for child development or has made an impact in your life.

Overall the project has 1.4 million dollars left to raise to meet the goal.