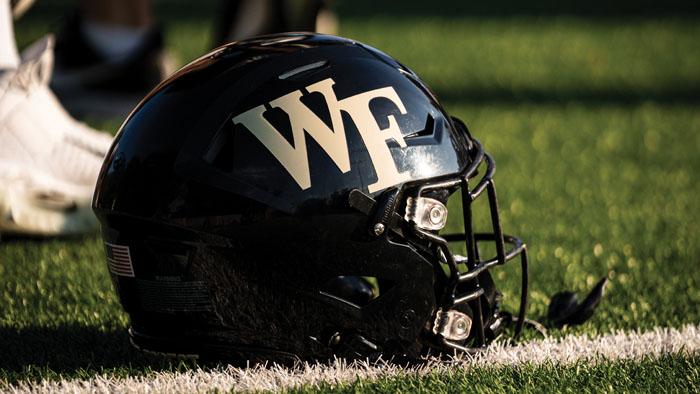 Wake Forest cruised in its opener against VMI.

WINSTON-SALEM — Mitch Griffis threw for 288 yards and three touchdowns in his first career start and Christian Turner and Taylor Morin added spectacular individual efforts on scores, helping No. 22 Wake Forest beat VMI 44-10 on Thursday night in the opener for both teams.

Griffis started with veteran Sam Hartman sidelined indefinitely by a non-football medical issue. Hartman — who guided the Demon Deacons to last year’s Atlantic Coast Conference championship game — was on the sideline in his black jersey, black shorts and a black cap to watch his understudy lead an easy win against a Championship Subdivision opponent.

Griffis’ first TD throw was a perfect ball while moving to his right, with Morin diving just inside the right end-zone sideline for the 23-yard score and a 17-0 first-quarter lead.

Turner had preceded that with his own highlight-reel TD. He appeared headed for a modest gain when he was wobbled by a hit from Aljareek Malry in a crowd near the middle of the field. But Turner extended his left hand into the grass to stay on his feet, then popped free on the left side for a 35-yard TD.

Both scores stood after replay reviews.

Turner ran for 100 yards and two scores in the game to lead the Demon Deacons, who had 506 total yards but also committed seven penalties for 70 yards.

VMI, from the Southern Conference, sought its first win against a nationally ranked opponent from the Bowl Subdivision ranks. Its lone offensive highlight was Grant Swinehart taking a pass from backup QB Collin Ironside and sprinting down the right side for a 34-yard touchdown — though that came with Wake Forest leading 30-3 late in the third.

VMI: Led by eighth-year coach Scott Wachenheim, the Keydets are coming off their first back-to-back winning seasons since 1961-62. They were trying to earn their first season-opening road win since 2002. They finished with 222 total yards, never reached the red zone and couldn’t stop the run.

Wake Forest: The offense moved fine without Hartman, though this was hardly a clean performance. Notably, there were three holding penalties during two second-quarter drives, two to force a punt and one to wipe out an easy touchdown and force Wake Forest to settle for a field goal. There was another to negate Griffis’ 2-point keeper late in the third, irking ninth-year coach Dave Clawson enough that he kicked at the turf in frustration, even with a big lead.

Wake Forest is unlikely to move much in the next AP Top 25 after facing little drama in beating an FCS foe.

VMI: The Keydets host Bucknell in their home opener next Saturday.

Wake Forest: The Demon Deacons have a road game against a power-conference opponent, visiting Vanderbilt of the Southeastern Conference next Saturday.

In other games Thursday night:

It was a stress-free debut for new coach George Quarles after replacing Randy Sanders, who retired after the Buccaneers set a school record with 11 wins and reached the FCS quarterfinals. Quarles was an assistant at Furman the last five seasons and is in four Tennessee halls of fame, including the Tennessee Football Coaches after going 250-16 in 22 seasons at Maryville High School.

Saylors, the Southern Conference preseason Offensive Player of the Year, had scoring runs of 40 and 1-yard sandwiched around a 2 9-yard touchdown reception from Tyler Riddell as the Buccaneers led 20-0 after one quarter. Riddell added another TD strike in the second quarter and it was 34-0 at halftime.

Jimmy Urza threw a 5-yard pass to Ty Snelson in the third quarter for the Mars Hill score. That came after Riddell’s third touchdown pass. Riddell finished 14 of 19 for 197 yards passing.

Campbell cruises past The Citadel 29-10 in season opener

BUIES CREEK (AP) — Hajj-Malik Williams threw for a touchdown, Caleb Dowden kicked three field goals and Campbell rolled to a 29-10 victory over The Citadel in a season opener on Thursday night.

Williams gave the Fighting Camels the lead for good on the first possession of the game. His 14-yard scoring toss to Ezeriah Anderson capped a six-play, 74-yard drive. Dowden missed the extra-point.

Lamagea McDowell ran for a 7-yard touchdown 42 seconds into the second quarter and Dowden connected from 36 yards out to put Campbell up 16-3 at halftime.

Dowden added two field goals in the third quarter and Bryant Barr scored on a 2-yard run in the fourth to cap the scoring for Campbell.

The Citadel found the end zone on Peyton Derrick’s 19-yard scoring pass to Tyler Cherry with 2:53 left in the game. Derrick completed 3 of 5 passes for 35 yards with two interceptions.

Gardner-Webb rushes for 8 TDs in rout of Limestone

Gaither, a preseason All-American who has been named to the Walter Payton Award watch list, had 120 yards in the first half as the Runnin’ Bulldogs piled up 309 rushing yards. Gardner-Webb had 394 yards of total offense and 22 first downs in the half while holding the Saints to 131 yards and five first downs.

Gardner-Webb scored 42 points in the first half and finished the game with 642 total yards. Limestone, with a spark from quarterback John Seter in the second half, finished with 347 total yards. Seter had 259 passing yards and two touchdowns.

Matthew Caldwell was 12-of-15 passing for 137 yards for Gardner-Webb. The Runnin’ Bulldogs scored all eight of their touchdowns on the ground.