High school football: Stout was a giant of Rowan football 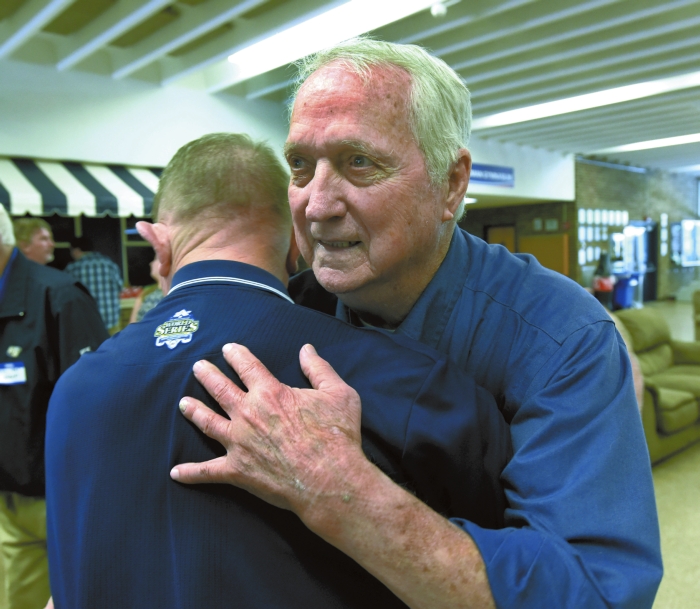 Pete Stout gets a hug during a reunion at Catawba College's Goodman Gym. Wayne Hinshaw/for the Salisbury Post (file photo)

SALISBURY — Carlton “Pete” Stout, one of the giants of Rowan County football, passed away at 86 on Sunday.

A member of the Catawba, Salisbury-Rowan and North Carolina High School Athletic Association halls of fame, he’s one of those rare coaches whose reputation has heightened, rather than diminished, over time.

In 1966, he was hired at Boyden High, which became known as Salisbury High in 1971.  Stout’s teams didn’t lose to another Rowan team during his 10 years.

Legend has it that Stout promised his players a two-hour Saturday practice if they ever lost to a county opponent.

“But we never had that practice,” said Joey Barrier, a Salisbury defensive end who played for Stout.

Stout’s overall record in Rowan County was 83-20-10. All 10 seasons were winning seasons.

He accomplished that mostly in the South Piedmont Conference when the SPC was one of the state’s toughest leagues. Every year, North Carolina’s Shrine Bowl team was well-stocked with SPC athletes.

Stout’s football coach, Bud Phillips, was well ahead of his time, an advocate of the Split-T in the days when most coaches were still clinging to the single wing.

Stout knew in high school he wanted to become a coach. He sat in on the quarterback meetings. He kept all his play books.

In 1954, when Stout was a senior, Catawba College basketball coach Earl Ruth happened to make a recruiting trip to Haw River to see the school’s touted 6-foot-5 center.

Ruth didn’t land the center. The big guy chose East Carolina over Catawba, but Ruth made the trip worthwhile. He was able to sign two of Haw River’s guards.

One of them was Stout.

Stout proved to be a fine basketball player for Catawba, lettering four years and scoring 348 points, but it was in football where he starred. A back on offense and defense, he was the team MVP, a co-captain and an Honorable Mention Little All-America in 1956.

His last college game was a 75-0 loss to Lenoir-Rhyne following a Catawba shutdown for a flu epidemic. It wasn’t the sort of loss Stout would forget.

Stout’s long coaching career began as an assistant at Williams High in Burlington. When he was 23, he was offered the head job at a tiny Alamance school known as Altamahaw-Ossipee.

In the spring of 1966, football at Boyden High, proud state champions in 1955 and 1957 under coach Bill Ludwig, had fallen on hard times with a meager 11 wins in six seasons.

There were people in Salisbury who remembered Stout from his playing days at Catawba and they took note of his success.

J.J. Knox, superintendent of Salisbury city schools, announced the hiring of Stout and his mission to revive the struggling Boyden program in April 1966.

“Boyden was playing in the state’s biggest classification then,” Stout said in an interview with the Post several years ago. “There was some concern that I wouldn’t be able to manage a large of number of players at a big school, but I was offered the Boyden job. I knew (former Catawba player) Charlie Little was already at Boyden, I knew Charlie from coaching against him, and I knew he could coach defense. I called Charlie and asked if he’d stay if I took the job, and he said he would. Charlie and I would coach together more than 20 years.”

Stout was an organizer. He put together a staff. He had a simple winning formula. He two-platooned, put his sturdiest studs on defense and ran the ball.

Ron Raper was Stout’s first team captain. His first win came against South Rowan. Boyden made the state playoffs in 1966, lost to Garinger, and finished 6-3-2.

Black students had a choice of schools, and a small number of Black athletes who suited up for Boyden in 1966 became a strong tide by 1968.

After Price closed in the spring of 1969, Stout’s team was a powerhouse, two deep everywhere, and capable of taking on anyone.

It was a time of change. Stout and his staff was instrumental in making full integration at Salisbury happen peacefully.

“Athletics played a big role in the integration process,” Stout said. “At a lot of places, they had trouble. We had very little. The consolidation of two schools into one went smoothly at Boyden, smoother than any other school I know of because of two men — James Bridges in football and Fred Evans in basketball. They’d been Price’s coaches, but they brought their players in. They could’ve been resentful, but they weren’t. They helped everyone get along. They made it easier.”

Stout always believed that the 1970 team was his most talented. Gifted Kenny Holt and sprinters Aubrey Childers and Rogers Jackson in the backfield. Massive and powerful tackle Robert Pulliam anchoring an immovable defense.

When that undefeated 1970 Boyden team, which had already rolled in a hyped game of the century against East Rowan, fell 13-6 to Shelby in the WNCHSAA championship game, Stout and Little wondered if they were destined to be denied a championship. Mostly, they hadn’t been lucky. Holt, the quarterback, had to leave the game for a helmet repair with Salisbury inside the Shelby 10. The next play was a fumble.

But 1971 was different. That was the year school became known as the Salisbury Hornets. Red was added to the black and gold school colors to reflect the heritage of the J.C. Price Red Devils.

The Hornets tied South Point in 1971 for a WNCHSAA co-championship. Then Salisbury beat Watauga for an undisputed crown in 1973.

“Coach Stout gave us a rule book,” Barrier said. “He told us if we couldn’t give 100 percent he didn’t want us on his team and he told us football wasn’t a sissy sport and he expected us to behave the right way. There wasn’t any fighting or cursing, and he told us to forget about our girlfriends until the offseason. We didn’t argue with him. We took everything he said as fact and we would’ve run through a brick wall for him.”

In 1974, the Hornets would run through brick walls. They would return to Shelby for Stout’s most satisfying victory at the helm of the Hornets.

With their shoes painted bright red in response to Shelby’s gold cleats, the Hornets won the WNCHSAA championship game on the road, 14-3.

“The people at Shelby always fed the visiting team sandwiches after a game, but I told Coach (Gerald) Allen we’d already made plans to stop at a steakhouse on the way back so if it was OK with him we’d just go on,” Stout said. “Coach Allen said they were gonna be pretty upset if we didn’t eat their sandwiches. We didn’t want to make ’em any madder than they already were so we ate ’em. But we still stopped at a steakhouse coming back. We ate twice that night.”

After his runaway success in Salisbury, the next chore for Stout and loyal staffers was to turn things around at Williams High in Burlington.

Stout’s mother had passed by then, but his father was still living in Alamance. People told him he couldn’t win at Williams. Challenge accepted.

Stout’s system worked just fine in Burlington. Williams won 3A championships in 1980 and 1981 and won 43 straight games. That was a state record at the time. His 1978 team was state runner-up. Stout’s Williams teams went 71-12.

Stout couldn’t turn down the task of trying to get Catawba College back on top, and he gave it his best shot from 1983-86.

“I really enjoyed coaching college talent because every player was the captain of his high school team and was all-conference,” Stout said. “We could identify that talent, but recruiting was a challenge, we were inexperienced at it, and we made mistakes. We did make progress as far as the program getting the financial support it needed.”

Stout gave himself a four-year timetable to turn around the Indians. Progress was made, but he knew he was still years away from being where he wanted to be.

Wins were elusive. He had 13 in four years.

The 13th was his last game at the helm — a payback game against Lenoir-Rhyne. Then he moved on.

“But he made a difference when he came in,” said former Catawba quarterback Bobby Myers. “He brought organization and community support picked up. We got nice new uniforms. My senior year (1984) we were only 3-8, but there were some close losses. We beat Guilford when they were ranked No. 8. He got us back on track.”

When he exited Catawba, Stout was four years away from having 30 years in the school system and qualifying for full retirement benefits.

He spent those four years as the head coach at Freedom High in Morganton. Not surprisingly, he won. His Patriot teams went 32-12.

“Retirement” from teaching was fine, but he liked coaching football better. In the summer of 1991, Stout became defensive coordinator for coach Mike Carter at Mooresville. Carter had played for Stout at Western Alamance and had assisted him at Williams.

“Pete was a good organizer and he knew how to treat kids,” Carter said. “He ran clean programs. He went round and round to several schools, but he did well everywhere he went.”

While he was coaching at Mooresville, Stout got to know a defensive assistant coach named Joe Pinyan, who eagerly soaked up knowledge from a master.

Stout urged Pinyan to apply for the Salisbury head coaching job in 2003. The rest is history. The Hornets would win 100 games, including a state title, during Pinyan’s 10 seasons.

“Rowan County track was really good at every school,” Stout said. “If you could win the county, then you could win anywhere. We got our best athletes out there.”

His stingiest defensive football team was the 1963 Western Alamance squad, while the 1980 Williams team boasted the most prolific offense.

But the powerful local teams he coached were some of the best ever in Rowan County.

Those teams — and their head coach — will never be forgotten.