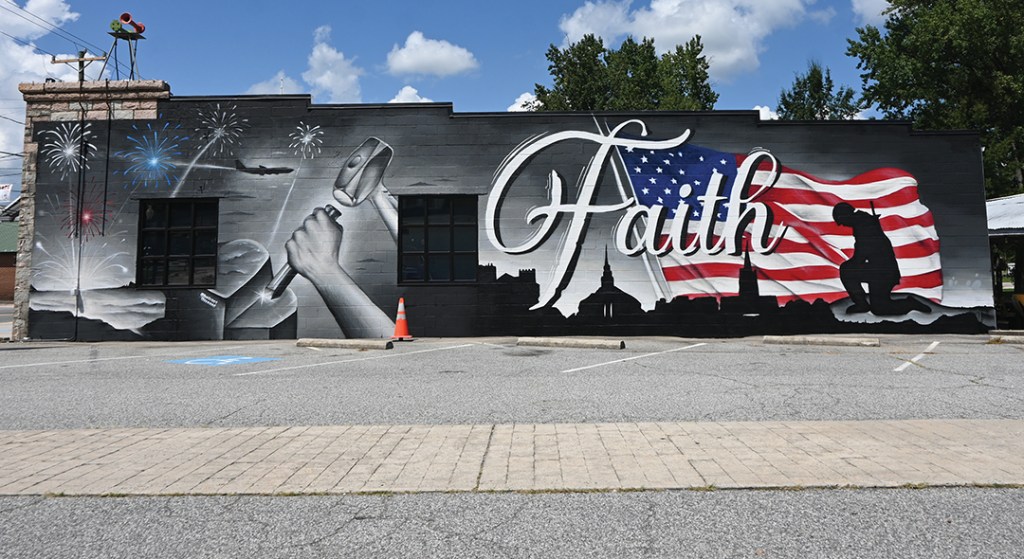 Madeline Wagoner/Salisbury Post — The Faith mural by Shane Pierce covers the entire side of the old Faith Fire Department, displaying the core culture of the municipality.

FAITH — From Thursday to Friday, local artist Shane Pierce, also known as Abstract Dissent, brought art to the Town of Faith, showcasing the pride within the municipality.

A mural now covers the left wall of the old Faith Fire Department building on South Main Street in Faith. According to Mayor Randall Barger, it was something the town had been considering since April. Pierce’s Grove Cartel piece showcased him as the artist of choice for the new addition to the town.

Barger, along with Alderman Jayne Lingle, Todd Peeler and Daisy Bost all had a hand in the process of what the end product would be and after consulting with Pierce, he was able to use his style to capture the town’s culture in grayscale with splashes of color.

The mural features silhouettes of Faith Baptist, Shiloh Reformed and Faith Evangelical Lutheran churches, the American flag with a soldier kneeling before it, the rock logo of the town and fireworks with a plane in the sky. According to Barger, the plane represents when former-late President George W. Bush flew over Faith to visit in 1992.

The artist said he spent around 30 hours to finish it by Saturday afternoon. Some challenges he faced included making the ideas given to him into a cohesive piece.