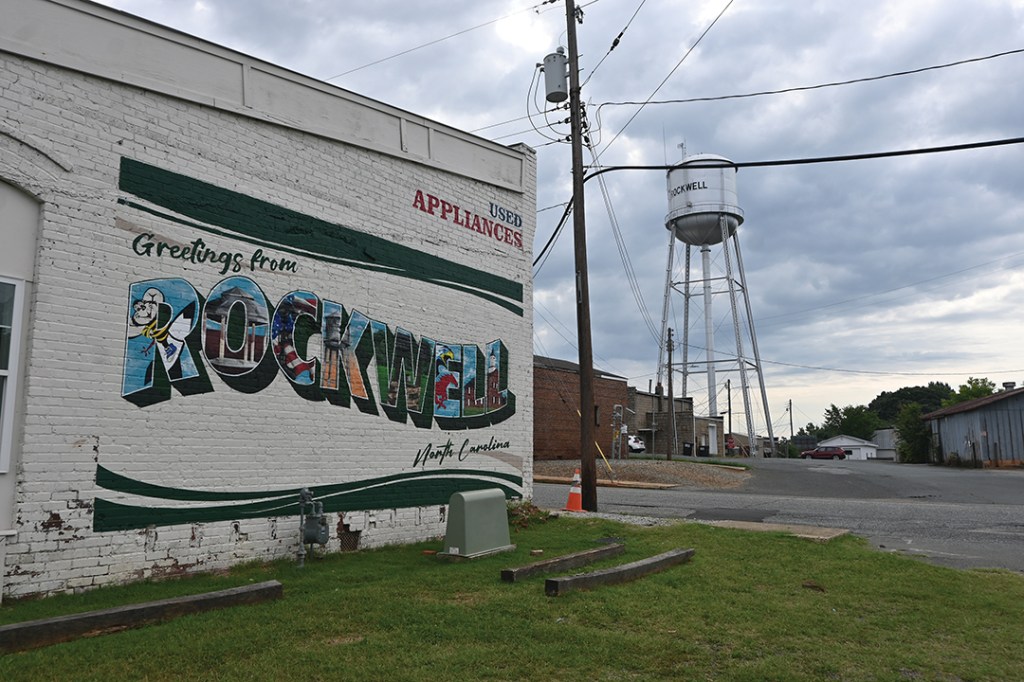 Madeline Wagoner/Salisbury Post — The Town of Rockwell has complete a second mural on Depot Street, designed and painted by John "Cheeks" Bates of Charlotte.

ROCKWELL — The town of Rockwell now has its second mural, completed on Depot Street this past week by a Charlotte artist.

The original welcome to Rockwell mural is across the street from town hall on Main Street.

Alderman Dillon Brewer has been overseeing the latest process over the last few months, working with John “Cheeks” Bates to create a design that was resembled a postcard to put on the side of the Used Appliances Center, which is owned by Rodney Reavis. The mural took around two weeks to complete.

Bates shared that this mural provided some fun challenges for him to explore as he does mainly illustrative art for his works. Regardless, he was able to execute the lettering with the addition of rendering, his specialty, and thanks Brewer for inviting him back to be a part of the new mural.

“I really enjoyed adding the dimension of the flag folds and gradient behind the water tower in the ‘K’,” he said. “The geometry with the gazebo was also fun.”

The designer of the postcard look for the mural was originally sketched by Rebecca Linker, founder of PenPoint Design in Rockwell, and the daughter of Rockwell Fire Department Chief Tim Linker. She is also involved with the new town logo and is assisting with the designs of other murals being planned for the municipality. Her work can be found on Instagram under penpointdesign.

“It’s always really cool to see one of your sketches brought to life,” she said. “It’s especially neat to have it mercantile.”

Bates then went on to take her design and make it his own through rendering of notable Rockwell culture inside the lettering.

The mural’s visual aspect sits inside the spelling of Rockwell, featuring logos of Rockwell and Shive elementary schools, the veteran memorial gazebo and a church that stretches across two letters.

According to Brewer, this is not the last mural the town has planned.

Editor’s note: This story has been updated to reflect the origin of the mural design.