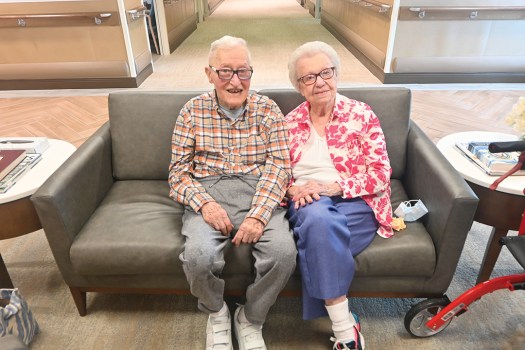 Madeline Wagoner/Salisbury Post — Robert Basinger (left) and Aliene McCombs have been friends for over 20 years. On Saturday, they will celebrate Basinger's 100th birthday. 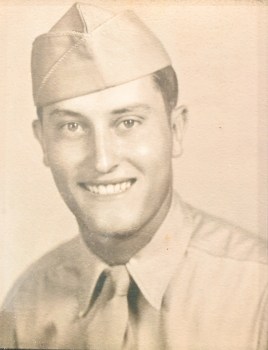 Submitted: A photo of Robert Basinger from 1944 when he first enrolled in the army.

SALISBURY — A veteran at the North Carolina State Veterans Home is about to celebrate his 100th birthday on Saturday.

A gathering will include close friends on his birthday, but they’re keeping the circle small to be cautious with the threat of spreading viruses still around. The people he has met along the way will join him, along with those he has became close to during his life.

Robert Basinger joined the Army at age 22 and served from 1944 to 1946, marching through France and Germany. He can still recall being on watch duty at night, cautious of anything he saw coming from the woods where he and his fellow soldiers camped.

It was the only time he lit a cigarette as his lieutenant recommended smoking when he felt nervous. The enemy saw the flame as he brought it to his lips and it was the last time he ever attempted to smoke. Other nights, he would see movement in the woods and did his duty to make sure he and his crew mates took cover and hid — only to find it was cows coming from the forest.

A cautious eye kept him quick on his feet. One story he shared was the time he had to dig a hole with a hand shovel to take cover as a tank was coming his way. The space was just big enough to fit his body in and the tank rolled over, but he survived and spent just under a week in the hospital after being run over.

Basinger said his wife, Hildred, wanted to be there while he healed, but she would have had to cross the Atlantic Ocean to do that. Beyond his military time, he recalled memories of going to the mountains to visit his wife’s family and staying in a cottage during their visits. Across from their home back in Rowan County, their neighbors had bluegrass music sessions every Saturday night. That is still his favorite genre of music.

Growing up, Basinger’s earliest memory traced back to when he would carry buckets of spring water to his childhood home where his father had a cotton field. He said cultivating and harvesting cotton taught him hard work that would prepare him for the other labor-intensive jobs he worked until retirement.

His father also would make a mug of coffee with castor oil for his health and that of his siblings. That kept him far away from the popular caffeinated drink until lately. Basinger said he remembered the taste was so unpleasant that he would give castor oil to his sisters’ grandchildren if they were naughty.

He worked at a sawmill cutting trees for lumber most of his life and drove a truck for Cannon Mills in Kannapolis. To him, he believes that automobiles have stayed the most important invention of his lifetime with Model T vehicles being his earliest to drive. With three pedals, he said it was not hard later on to shift to driving cars with only two.

Basinger cared for Hildred after her cancer diagnoses and when she died in 2000, he met his future caregiver at a bluegrass concert. Aliene McCombs became close friends with him and they went out to eat once in a while and took day trips to the mountains as he enjoyed. But when he was diagnosed with colon cancer in 2001, it was the start of a new journey for both of them.

“He had to have surgery and he did well with that but he developed an infection,” said Sharon Deal, McCombs’ daughter. “He was in a coma for two weeks and they didn’t expect him to make it, but one day he woke up and he was fine.”

The medical staff still did not feel comfortable sending him home since at that point he had no family in the area to care for him. McCombs told her daughter that he could live with them, and according to Deal, he was welcome to stay after he got well. He continued to live with McCombs until his health led him to move to the North Carolina State Veterans Home in Salisbury two years ago. She and her two daughters still help out as needed. He also still keeps in close contact with his closest relative, a great-niece, in Florida.

“He’s always bouncing around everywhere,” said his former neighbor, Rick Yost. “We did everything together, and he’d always help me on my farm.”

Yost said Basinger always stuck to the Farmers’ Almanac when gardening and often had superstitions he lived by. He would only leave a house from the door he came in and would not play card games on Sunday nights. Instead, he would play dominos.

“He wasn’t ever really a hat guy,” Yost continued. “He’d sometimes wear this toboggan, and if you saw him with that, you’d know it was really cold outside.”

Other things Basinger enjoyed were cooking and baking. Most of the time, he would make watermelon and rhubarb pies. However, he stayed away from shrimp due to a bad experience fishing. He and the people he went with used shrimp from a shop marketed as bait. Their fishing trip had not been as successful as they had liked, leading them to fry up the small amount of fish they caught with the shrimp bait. Unfortunately the shellfish made him sick.

Despite many of his life’s obstacles, he has been able to live his years with contagious humor and picking around with friends. A word of advice he suggests is giving castor oil to misbehaving kids, as he is sure it would keep them from going astray.