Livingstone, Catawba football teams to face off in return of Mayor’s Cup 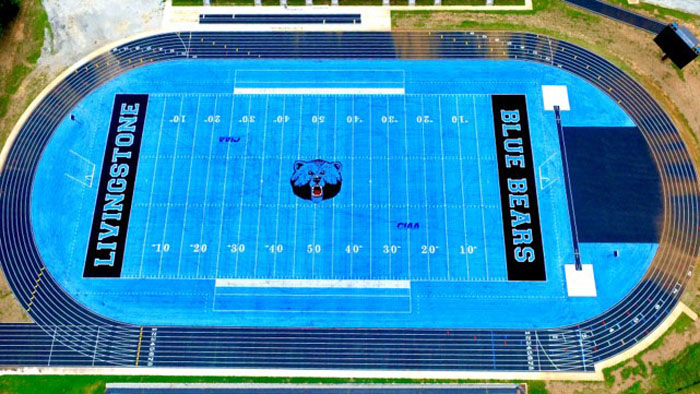 Livingstone and Catawba will compete at the newly remodeled Alumni Memorial Stadium on Livingstone’s campus, which was converted from grass to artificial turf painted in Livingstone blue. Submitted photo

SALISBURY – It’s been nearly a decade since the Livingstone College Blue Bears faced off against the Catawba College Indians in what is known as the Mayor’s Cup.

That hiatus ends at 5 p.m. on Saturday, Sept. 3, at the Blue Bears’ football season opener. The teams will compete at the newly remodeled Alumni Memorial Stadium on Livingstone’s campus, which was converted from grass to artificial turf painted in Livingstone blue.

Livingstone and Catawba competed annually for a number of years, dating back to 2001. The last football game played between the two Rowan County colleges was in 2013.

“As presidents of our community’s two four-year colleges, we’re glad schedules allow our teams to compete once again,” said Catawba College President Dr. David P. Nelson and Livingstone College President Dr. Jimmy R. Jenkins Sr., in a joint statement. “The presence of our teams on the athletic field is much more than a game. It is a demonstration of our partnership.”

Both Livingstone and Catawba colleges as well as Rowan Salisbury Schools, Rowan-Cabarrus Community College and Rowan County government and economic development form the Rowan Educational Collaborative, which works — together — to ensure Salisbury/Rowan is an exceptional education community and to empower residents to engage as citizens, equipped to participate in a thriving local economy.

Jenkins, who is retiring, said he is glad the return of this friendly rivalry is occurring under his leadership and that simultaneously, it will be the debut of the Blue Bears new blue turf field. “We might be on opposite sides of the blue football field Saturday, but we are on the same team when it comes to the importance of educational empowerment for our young people,” he said.

“In a world filled with bad news, we are glad to say there is much good occurring on and around our campuses. We know education truly changes lives. Our colleges are opening the doors of opportunity to a diverse array of students,” the two presidents said.

“On September 3, either Livingstone or Catawba will prevail on the football field. We’ll celebrate the winning squad and the good sportsmanship of both teams. Because of the opportunities our school system and institutions of higher education create, we know – no matter who triumphs on the field – the real winner is our community,” they said.

“As mayor of Salisbury, I am honored to present the Mayor’s Cup to the winning team for this game,” said Mayor Karen Alexander. “The Mayor’s Cup represents sportsmanship on and off the field and celebrates the diversity of people and programs offered through these two historic four-year liberal arts colleges. Whatever the score of this game, the community scores a big win!”

Prior to kickoff, Livingstone will hold a ribbon-cutting ceremony for the remodeled stadium. In addition to the blue turf, other upgrades were made, a new track was installed and a digital video scoreboard was added. The ribbon-cutting will take place at 4:20 p.m. and requires a game ticket for entry.

Founded in 1851, Catawba College is a four-year, private, liberal arts college that offers more than 70 undergraduate and three graduate programs allowing students to explore diverse interests and create their own academic pathway. Additional information is available at catawba.edu.