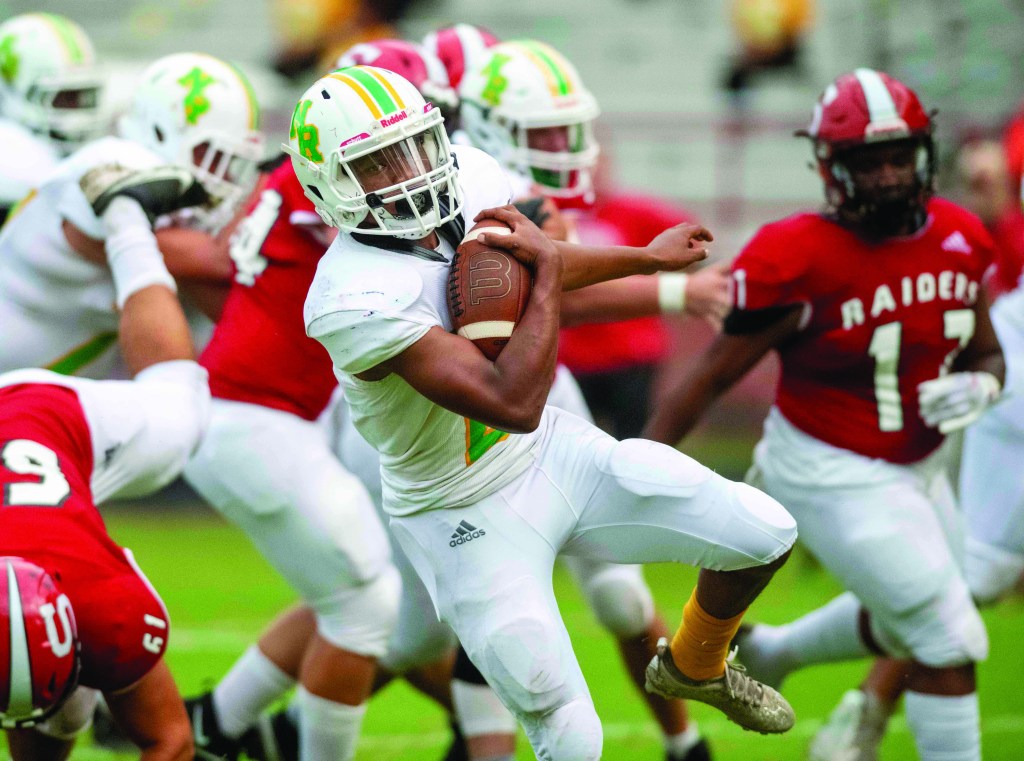 Eight days after trouncing host East Rowan the Cavs had their way with South Rowan, winning 57-0 Friday night at James Donnell Stadium. North scored touchdowns on its first seven possessions — and eight of nine altogether — in a performance that won’t soon be forgotten.

“We’re excited, but not too excited,” third-year coach Nygel Pearson said after North dictated another feel-good story. “We know we still have things to clean up. It definitely gives us some momentum going forward. These guys were focused and locked in tonight.”

South, meanwhile, was overmatched. While the youthful Raiders (1-1) took 24 snaps in North territory and inched as close as the enemy 4-yard line in the game’s final minute, they never reached the end zone. South rushed for 120 yards and passed for 78, but its defense was a turnstile, yielding 304 yards in the first half and 371 all tolled.

“They were a fast, aggressive team,” senior linebacker Jed Waller acknowledged. “It’s not that we weren’t ready, but once they got going, they were tough to stop.”

North running back Jaemias Morrow was particularly difficult to contain. The junior running back was firecrackers on the Fourth, exploding for three touchdown runs in the first half before finishing with 131 yards on just 11 carries. He also recovered a second-quarter fumble in the end zone, helping the Cavs mount a 49-0 halftime lead.

“When it starts for us, it starts in practice,” Morrow said after recording his seventh touchdown of the season. “We do what we do in practice, then bring it to the game and do it even better. When you go 110 percent all the time, it looks easy.”

Pearson had nothing but praise for the 180-pound, fight-for-everything bruiser. “He’s just a tough, football guy,” the coach said, flashing that Magic Johnson smile of his. “He loves playing football, he’s tough as nails and he always finds a way to get around the football. Then we put it in his hands and he can make people miss, he can run through people and he can run away from people. It’s good to have a back like that.”

Morrow’s teammates followed his lead. North quarterback Jeremiah Alford passed for 129 yards and scrambled for another 93 — opening the scoring with a 19-yard TD run midway through the opening quarter and closing it with a 27-yard swivel into the end zone in the third period. In between he threw a pair of touchdown passes, including a 48-yard spiral to lightning bolt wideout Amari McArthur early in the second stanza.

“It was the right call,” McArthur beamed. “The outside linebacker rolled down like he was going to blitz, which left me wide open. Then (Alford) put it right on my hands.”

A 17-yard touchdown pass from Alford to Xavier Suber gave the Cavs a seven-touchdown advantage at halftime. A running clock was initiated in the second half and North drove 62 yards on eight plays for a score on its only possession, capped when Alford rambled 27 yards and scored standing up with 5:05 remaining in the third quarter.

South staged its most impressive drive in the waning moments. With sophomore Brooks Overcash and junior Jamie Klassette enjoying a timeshare arrangement at quarterback, the Raiders advanced from their own 13-yard line to the end zone gates — only to be thwarted when NR’s Jadarion Sullivan and Bryson Crisco combined for a third-down sack and teammate Khalil Davis broke up a pass on the game’s final play.

“We’re just so young,” South coach Chris Walsh said as the sizable crowd thinned out. “Two weeks in a row we’ve gotten into situations that a lot of boys haven’t done before. Last week it was a close game that came down to the wire (a 9-6 win at Parkland) and they won it at the end. This week it was getting jumped on early and learning how to battle back. Really, any result right now is going to be a learning experience.”

Even for the victors. “It was a county game, an important game,” said North defensive lineman Robert Caldwell. “It brings us up as a team and shows us what we need to do more of.”

NOTES: Morrow and Caldwell had fumble recoveries for North and defensive back Tsion Kelly collected his fourth interception of the year. … McArthur finished with four receptions for 74 yards. … The Cavs never punted and returned only one kickoff, the one that started the second half. … South’s Overcash completed 9 of 17 attempts for 63 yards and teammate Landon Richards — a running back with a whiff of Barry Sanders in him — plowed for 69 yards on 14 carries. The Raiders suffered a costly casualty when kicker/punter Jadon Moore injured his right knee in the second quarter and never returned. … The Cavs host North Stanly in their home-opener next Friday. South travels to Concord for a match with Robinson.