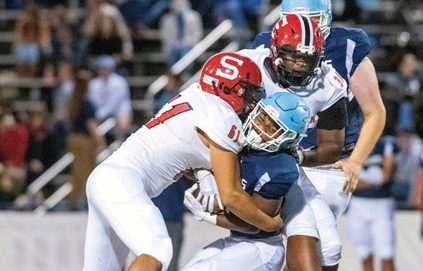 It’s been mostly tough times for the defensive end — Friday’s exciting 9-6 win at Parkland was only the sixth victory that he’s gotten to savor — but he’s made up his mind that his senior year is going to be the crossroads.

“Last season there were games where we’d play well for a while, but then we’d fall apart when we got down,” Bernal said. “My goal as a captain this year is to see that we don’t get too emotional when things go wrong. It means changing the mindset and changing the culture. When something goes wrong, we have to move on and keep playing.”

When he looks around him and behind him, Bernal sees mostly sophomores, but they’re pretty talented sophomores who know what winning feels like. The 2021 South jayvees weren’t pushovers. They won their share.

“Linebacker Jacob Trimnal and I want to be a senior dynamic duo for our defense,” Bernal said. “This season, we’ve got to not only tackle people, we’ve got to help lead a young team.”

It’s fine to talk about it, but words are wind. Actually going out and doing it means a lot more. Trimnal and Bernal are doing it. They had huge sacks in Friday’s win.

Bernal had himself a game. Besides the sack, he recovered a fumble. He batted down two passes. He made five solo stops. He played every defensive snap.

“He made them double and triple-team him,” South head coach Chris Walsh said. “He’s got a chance to be a Saturday guy. He’s got the size (6-foot-1, 230 pounds) and strength and quickness, and he’s got the character. Great person, 3.7 GPA. He works in the classroom the same way he works on the field.”

How did he bat down two passes?

“Sometimes you can see that you’re not going to get to the quarterback, so you get your hands up,” Bernal said. “I was able to knock down two of them. I’m a better player now than I was as a younger guy. I use my hands better. I use my speed more, instead of just trying to overpower a blocker. And I’ve studied a lot of film over the years, so I’ve got a better idea what play is coming.”

When South edged Parkland last fall for its only win of the season, it wasn’t pretty. The Raiders mustered very little offense, but they were able to beat a struggling, young Parkland team. Friday’s game was different. There were still plenty of opening-night jitters and miscues, but South Rowan showed off a serviceable running game, with Landon Richards and Trae Rucker combining for 175 rushing yards behind an improved offensive line. There was some balance. Sophomore QB Brooks Overcash threw a TD pass to tight end Alex Furr.

“We had to be better to win this time because Parkland is way better than they were last year,” Bernal said. “They ran their plays better, they’ve got crazy speed and they have a quarterback who can get the ball out of his hands very quickly.”

Parkland led 6-0 at the half. South tied it 6-all on the Overcash-to-Furr pass, but Jadon Moore, a talented sophomore who is South’s kicker and kick returner, missed the PAT.

Trimnal’s sack stopped Parkland and gave South a chance to put together a decisive drive with about five minutes left.

The plan was to keep the ball and kick a field goal on the last snap of the night. If Moore made it, South would win. Worst-case scenario would be a missed field goal and South would still have a chance to win in overtime.

But a lot happened to disrupt efficient time management in that final minute or so of regulation.

“Mostly it was cramps,” Walsh said, “Someone was cramping every 30 seconds and we ended up trying the field goal with some time left on the clock.”

Moore made the clutch kick. His 44-yarder split the uprights for a 9-6 South lead. It was one of the 10 longest field goals in South history. Under the circumstances, it was an incredible kick by a player who had missed his only PAT try.

“I’m on the sideline and as soon as that kick goes up, I start praying,” Bernal said. “Jadon made it.”

The bad news was that South still had to kick off, and with Parkland’s wheels, the Raiders were one missed tackle away from disaster.

“We didn’t kick off where we wanted to kick it and then we had a penalty at the end of the return,” Walsh said. “And now they’ve got the ball on our 30.”

One play later Parkland was at the South 18. There was time for one last play, and if South had allowed this one to get away it may have been devastating.

Bernal didn’t let it get away.

“I could hear Coach yelling at me, ‘Go get him! Go get him!'” Bernal said. “That fueled me. I drove the guard blocking me into the backfield and got to the quarterback.”

It was a walk-off sack.

“You’re not going to see many walk-off sacks,” Walsh said. “But Bernal broke through and that’s the kind of play that all of us — coaches and players — expect him to make.”

Bernal’s dream school is Appalachian State, but he realizes that it’s much more likely he’ll end up getting a chance in Division II or Division III.

That would be fine with him. All he wants is a chance to keep playing a game he loves, and a game that is starting to love him back a little bit.

“Any school that would provide a free education, I’m interested,” Bernal said.  “But right now I’m focused on our season. I want South Rowan football to be better when I leave then when I got here.”

Next for the Raiders is a visit from North Rowan on Friday at 7 p.m. North beat the Raiders in overtime last season.