Man caught after high speed chase from Rockwell to Salisbury

SALISBURY — The Rowan County Sheriff’s Office apprehended a man leading law enforcement officers on a high speed chase that started in Rockwell and ended in Salisbury.

It began in the 7000 block of Old Concord Road before being stopped by a PIT (pursuit intervention technique) maneuver on Fulton Street. 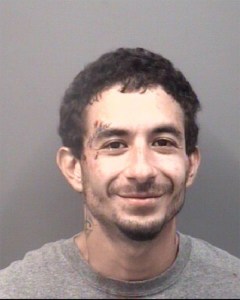 The suspect, 30-year-old Carlos Manuel Rodriguez, fled on foot until he was apprehended by a RSCO K-9.

Chief Deputy David Ramsey confirmed that the suspect had wrecked the white car he was driving in Rockwell but he was not stopped until after wrecking his damaged car again on Fulton Street in Salisbury. The suspect was taken in custody then as a N.C. Highway Patrol helicopter that was part of the chase hovered overhead.

Rodriguez was arrested on charge of misdemeanor failure to appear, hit and run property damage, driving while license revoked, reckless driving, driving without a registration, improper passing too close to the left, failure to wear a seat belt, failure to reduce speed, injuring a law enforcement agency animal, resisting an officer non-assault and possession of drug paraphernalia. He also received felony charges of possession with intent to sell schedule two controlled substance and marijuana.