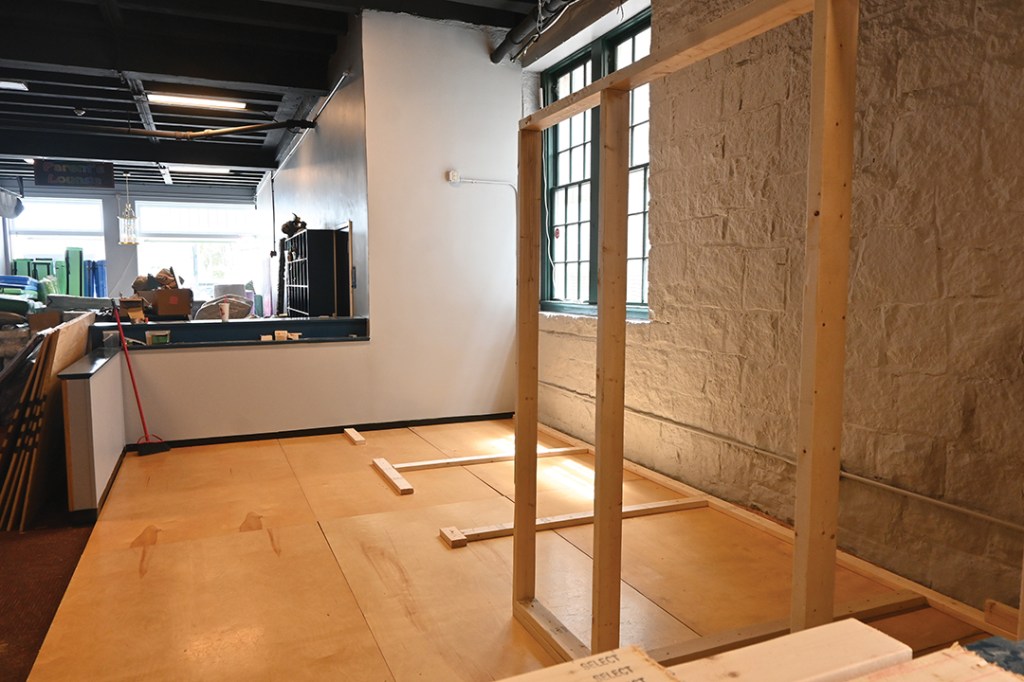 Madeline Wagoner/Salisbury Post — If you walk into The Fun Factory, the 'tiny town' will be at the left near the first set of windows. The space will serve as a smaller scale of downtown businesses for toddlers to 'shop', play and use their imaginations.

SALISBURY — The Fun Factory has began construction on the newest addition to the indoor park that will have downtown businesses involved in the design.

Marianna Jarrett introduced the “tiny town,” a play shopping area for toddlers to use their imagination and “shop” from smaller scale versions of some of Salisbury’s most iconic stops. Sponsored businesses contribute $500 to The Fun Factory, which will then have a mini version of the business built with its store sign in front.

Five businesses in the area have already confirmed their spots in the line-up, and Jarret is working with the contractor to determine whether  the space allotted to the mini shopping area can accommodate more businesses.

“We’d like to extend it, but we’re also trying to make sure the area is wheelchair accessible and that it doesn’t block the other play areas to where you can’t see the kids,” Jarrett said.

The plan originally was to transform the party rooms into a mini market for play grocery shopping, but those rooms will be used for their intended purposes as Jarret had another idea.

“Originally we were gonna come up with generic shops,” she shared. “But then I had the idea for this because it’s a unique way to get businesses downtown involved and to also market them.”

So far, Barnhardt Jewelers, Lora Belle Baby, South Main Bookstore, The Forum of Salisbury and Go Burrito have all reached out for a place in the tiny town. Four spots already have a foundation built with an area designed to resemble the outdoors featuring play grass. Each business will be working with the owner, Jarrett, on the deign of the shops as construction continues.

“We need something like this for Salisbury,” said Debbie Barnhardt, owner of Barnhardt Jewelers. “It’s close to the park (Bell Tower Green) and shops, it’s perfect and very exciting.”

Machelle Frick, owner of Lora Belle Baby,  said The Fun Factory is just the place for her business because its a children’s boutique that will be in a place catering to children.

“We want children to have the same fun in The Fun Factory that they have coming through our store,” she continued.

Some ideas Jarrett has already brainstormed included a dress-up area in Lora Belle Baby’s replica and a reading nook in the South Main Book Co. spot.

“It’s a neat little idea,” said Matt Marsh, co-owner of the forum. “We want to try to support other small businesses and it’s great what they’re doing up there. We’re (The Forum) not targeted to kids but we do have a daycare. When children come in, they’re always like ‘I want to go workout’ so this way, they can experience The Forum themselves catered just for them.”

Additionally, the materials to build the indoor playground have been received by The Fun Factory and assembly will begin next week. Jarret said the business is projected to open by the beginning of October.