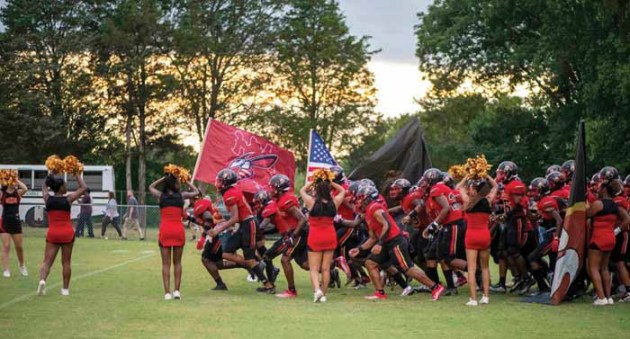 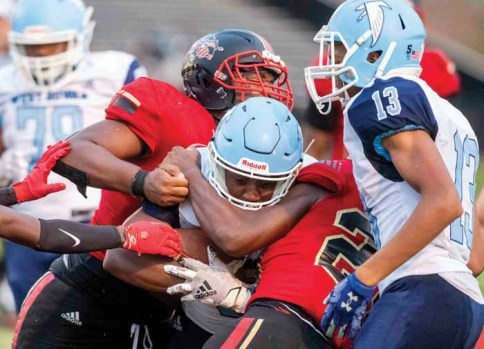 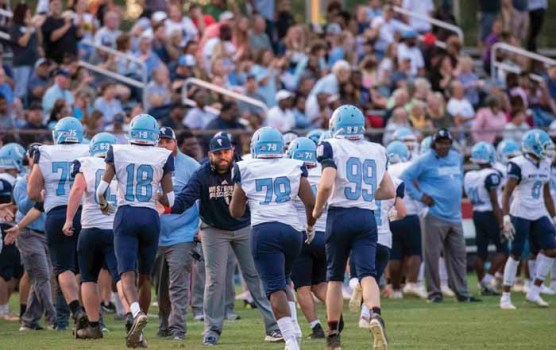 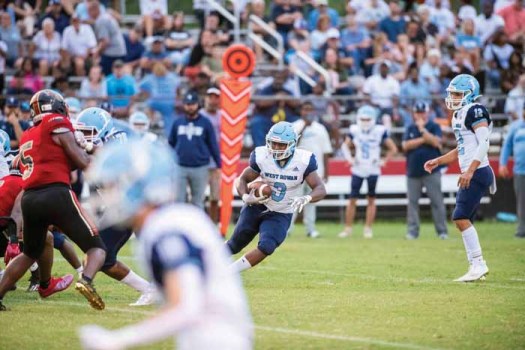 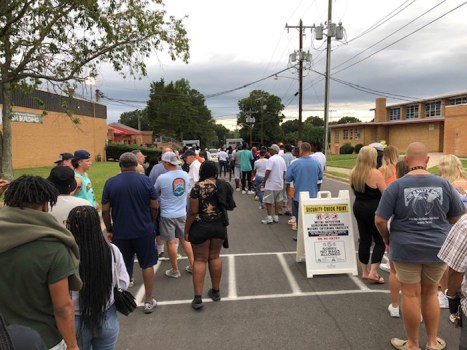 Fans wait to get through the security check at Salisbury’s Ludwig Stadium before Friday night’s game. Jon C. Lakey/For the Salisbury Post

SALISBURY — It all ended crazily on Friday, with a hastily evacuated stadium and masses of police responding to a report of gunfire.

Police later reported no shots were fired in the stadium and no guns were found, so the night will be remembered not for temporary insanity but for a statement performance provided by West Rowan’s football team.

West battered Salisbury 31-7 in an emotional opener, recapturing the king of the county label that had become the Hornets’ property during the previous three seasons.

Play was stopped when a panicky situation developed in the stadium with about seven minutes left. The announcement to clear historic Ludwig Stadium came shortly after a grinding, 10-minute West drive ended with a Juan Arteaga field goal.

By then, the winner was no longer in doubt.

“The last time we played Salisbury (spring 2021) it was unfortunate that we went into it with our hands tied, without our quarterback and some other key guys, and then our second-string quarterback goes down on the second play,” West head coach Louis Kraft said. “Losing to Salisbury and losing to them in the fashion that we did (36-0) hurt, and that game has bothered us ever since. And then we didn’t get to play them last fall. Look, they’re still really talented on offense, and they’re going to have another good season, and there’s no doubt they have been great the last three years.  But we’ve been really good now for more than two decades, and I think a lot of people have forgotten all that. We were feeling pretty disrespected, so we brought some massive intensity to this game. I believe we let people know tonight the Falcons are still the Falcons.”

Life often moves in a circle. Lucas Graham, the second-string QB who broke his collarbone on a Jalon Walker hit in that spring 2021 rout by the Hornets, is now the starter for the Falcons. He had a humongous game on Friday in his debut as the starter, maybe not huge in a statistical sense, but he ran the show, threw two TD passes and made a key play whenever the Falcons needed one.

“He had full command of our offense, was in total command of what we wanted to do,” Kraft said. “He made plays when he was pressured.”

West’s failure to score in the Rowan County Jamboree and the transfer of West’s best-known senior (Peter Williams-Simpson) seemed to signal a decline of the Falcons, who were 7-4 last season, but West isn’t interested in becoming old news.

“Our guys have bought in since February and they work their tails off to be good every day,” Kraft said. “Hats off to all of them. This was a good night to be a Falcon. We rolled the dice a few times as coaches. Our guys always made a play.”

A preview story in Thursday’s Post pointed out that favored Salisbury had several marquee, record-seeking monsters returning and added “this might be the first time in 25 years that the average football fan can’t name a single West player without looking at the roster.”

The story made its way to the locker room bulletin board in Mount Ulla, with West’s offensive line coach Tim Pangburn highlighting the no-names sentence. Kraft said that sentence had the Falcons ready to run through walls and chew up nails on Friday.

“This one mattered,” Kraft said. “It mattered a lot.”

Salisbury’s county winning streak came to a screeching halt at nine games. Kraft cheerfully mentioned the Falcons once won 44 straight (a run that lasted from 2001-12) in the county.

From a Salisbury perspective, if it could go wrong it did in Clayton Trivett’s first game as head coach, including a disastrous mistake by star running back JyMikaah Wells.

Wells scored his 50th career TD and broke Dario Hamilton’s school record for career rushing yards. Hamilton had 3,553 yards from 2005-08, while Wells finished this game with 3,647.

Wells broke loose on a play that would’ve been a 26-yard touchdown run and would’ve made it a 7-all game, but in his excitement, he clearly laid the ball on the grass before he reached the goal line. West’s coaches in the press box noticed the miscue as did officials, and Kraft was screaming at his guys to scoop the ball up and go. Matthew Gabriel did, surprising quite a few celebrating Hornets who were heading off the field.

Gabriel’s long return set up a West touchdown. It basically was a wild, decisive swing — from 7-7 to 14-0. Salisbury never recovered.

“I was wind-milling Gabriel like a third-base coach,” Kraft said.

But the first of numerous snap issues quickly put Salisbury’s offense behind the chains before Mike Geter’s third-and-long pass failed to connect.

West’s second possession was kept alive by a fourth-down pass interference penalty, and Graham turned that opportunity into gold with a 22-yard scoring pass to speedster Adrian Stockton. Arteaga’s kick made it 7-0.

The Wells “fumble” came next. Graham’s 20-yard completion to Tanner Poole put the Falcons on the 1, and West bulldozer Landon Jacobs, a former defensive end, plowed for the first of his two touchdowns to make it 14-0.

“Landon is a load and our guys up front were moving people,” Kraft said.

Jacobs’ second TD came 45 seconds before halftime. Now it was 21-0.

Salisbury’s first desperate possession of the second half began promisingly with 11-yard runs by Jamal Rule and Amare Johnson. The Hornets watched a routine third-and-4 slide into a low-percentage fourth-and-9 with another snap issue. On that fourth-and-9, the Falcons weren’t fooled at all by a faked punt.

“We were playing it safe there, not sure if they’d punt it, and our guys did a good job of swarming to the ball,” Kraft said.

Taking over at the West 48 with 8:24 left in the third quarter, West struck again. On a fourth-and-6 play, Graham threw a strike to Evan Kennedy, who split defenders and made it 28-0.

The Hornets answered that one quickly. Wells, a pretty awesome combination of power and speed, raced 70 yards to put the Hornets on the Ludwig Stadium scoreboard. This time he handed the ball to an official.

It was old-school West football on a night when the Falcons made a statement they’ve been waiting a long time to make.

“Not bad for the West no-names,” Kraft said with a chuckle. “We out-physicaled them, we out-blocked them and we out-tackled them.”

It also was a banner night for West’s coaches. Everything they dialed up on both sides of the ball worked out.

The most startling stat was Salisbury’s zero passing yards.