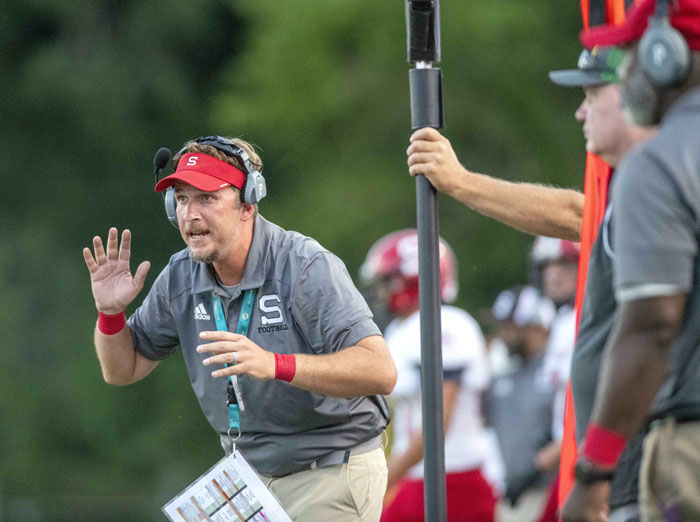 WINSTON-SALEM — Jadon Moore kicked a tie-breaking 44-yard field goal in the final minute and lifted South Rowan to a 9-6 win at Parkland on Friday.

“Lots of jitters and lots of first-game sloppiness, but I couldn’t be prouder of our young team,” Walsh said. “This is a Parkland team that is way better than they were when we beat them last year. They’re older, faster and stronger. They looked pretty impressive.”

When South got the ball back with about five minutes left in a 6-all game, Walsh was confident the Raiders could move it into scoring position for Moore.

“We knew what we could do and needed to do and we executed,” Walsh said. “Of course, we’d planned to get it down there a little closer for him than we did.”

Parkland scored first and took a 6-0 lead to the half.

South got the equalizing score on a 10-yard pass from Brooks Overcash to tight end Alex Furr. That set the stage for the game-deciding drive.

The Raiders stalled at the Parkland 27, but Moore had enough leg to break the tie.

“He hadn’t been making any kicks like that in warmups, but I’ve seen him do it in practice a few times,” Walsh said. “And sometimes you just have to have a little faith.”

Moore, a sophomore who will be important for the Raiders on offense, defense and special teams, made one of the longer field goals in South history.

Brennan Lambert’s 51-yarder against Northwest Cabarrus has been acknowledged as the school record since 2015, while North Rowan’s Tracy Maynor connected on a 53-yarder against East Davidson in 1988 for a long-standing county record.

South’s defense played well all night and got  a sack to secure the win.

“Coach (Ron) Riddle made all the right calls on defense,” Walsh said. “We overcame adversity tonight. We fought back. Down in the second half, tied in the last minute, and our guys found a way to pull it out.”

Carson’s Jonathan Lowe started dreaming about being a head football coach when he was 15 years old.

Those dreams always included a Gatorade bath for his first victory.

There was a Gatorade bath after Carson’s opening game on Friday, but that icy treat was for Statesville’s new head coach Rydell Cowan after the Greyhounds shut out Carson 30-0.

“I got to know Coach Cowan when we were coaching jayvee basketball,” Lowe said. “Good guy and he’s got a good team. I congratulated him.”

Now Lowe looks forward to his own Gatorade bath. It will happen at some point.

“I don’t think we’re that far away,” Lowe said. “It’s a matter of inches for us as far as getting where we want to be offensively. A few more practice reps. We’ll get it.”

Offense was the issue for the Cougars against Statesville.

“First-half possessions for us were five three-and-outs and an interception,” Lowe said. “Our defense is fast and they played very well for a long time, but they were on the field way too long. We started moving the ball a little in the second half, and we can build on that.”

Statesville, which lost only one game last season, didn’t score in the first quarter and led 10-0 at halftime, but gradually pulled away.

Foday Dyer made an interception on a deep ball for the Cougars. Receiver Emory Taylor, who took over punting duties on Wednesday, boomed some good ones. Kody Samples and CJ Guida made some plays.

“We did some good things,” Lowe said. “We’re in it together and we’ll keep learning together.”

Carson’s home opener on Friday will be an emotional one against former head coach Daniel Crosby’s Mount Pleasant team, which beat Central Cabarrus on opening night.

“It will be a big game for our players, a personal game against a familiar face and a guy we know well,” Lowe said. “I know we’ll give it all we have.”

Xavier Chambers’ pick-six late in the first half for a 21-0 lead was a backbreaker, and the highly recruited Chambers added two rushing TDs in the second half.

Ashnah Lowery scored on long run on a keeper in the opening minute, and the Wonders never lost control of the game. Jamare Robinson and Navi Woods also had scoring runs.

The Wonders have never lost to North Meck.

MOORESVILLE — Mooresville dominated the first half and held off Davie County 44-28 at Coach Joe Popp Stadium.

The Blue Devils built a 31-7 lead at the break. Davie got back to 31-21 in the third quarter, but the Blue Devils, coached by former West Rowan and North Rowan head coach Joe Nixon, finished strong.

Davie got 215 passing yards from Ty Miller, 94 rushing yards from Markel Summers and 80 receiving yards from Brodie Smith. Jawarn Howell, who has been offered by Catawba, had 18 carries for 164 yards and two touchdowns for Mooresville. Howell’s 48-yard run started the scoring, and he sealed the win with a touchdown with about three minutes left to play.

In other football news, North Rowan receiver Amari McArthur has been invited to play in the Blue-Grey All-American Game in Tampa in January.