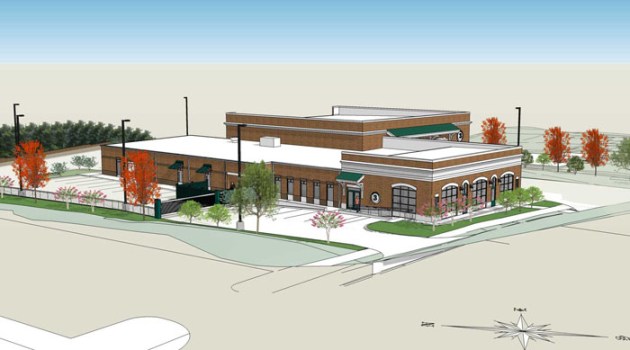 The new fire station’s entrance to the three bays would be from the back, and a brick wall will provide the support needed for the extended drive and plantings will eventually provide a visual barrier for neighboring houses. Renderings provided by RBS Architects 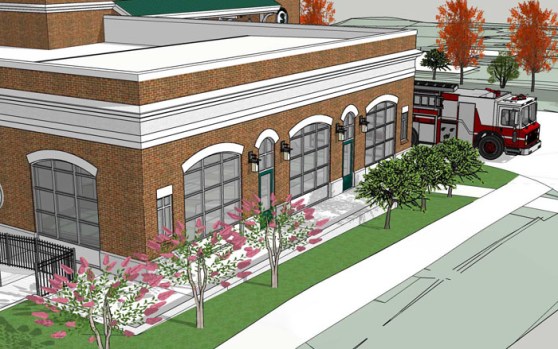 Architectural drawings from Ramsay Burgin Smith Architects show what the proposed new Fire Station 3 would look like, including domed windows that would show off trucks housed in the facility. Renderings provided by RBS Architects

SALISBURY — Though still in the planning stages, Fire Chief Bob Parnell and architect Bill Burgin showed the city council what the new Fire Station 3 could look like.

The current building that houses Station 3 is sinking in the middle, according to Parnell, and is backed up by images showing bowing and cracking in the interior walls and ceiling. Parnell noted that it has been determined the building was constructed on less than stable soil, but when it was constructed in 1956, that was not known.

“And in the ’50s, the station was built with an open plan, including bunks and bathrooms, because we were not thinking about having both genders to accommodate,” he said. “The new building will of course take that into account.”

The building at 1604 West Innes Street is the oldest and smallest of the current existing stations. It was constructed in 1956 and protects the northwest section of the city. The current coverage area includes a number of residential properties but it also includes Catawba College, Livingstone College, Novant Health Rowan Medical Center and the W.G. Hefner V.A. Medical Center.

The property for a new station is at 150 Mahaley Avenue, and according to estimates presented to the council Monday, would cost about $9.5 million, including furniture, phones, computers and all other equipment and supplies necessary for the station to function.

A new Station 3 was approved in 2017, along with a new Station 6, which has now been completed. At the time, noted council member David Post, the cost for each of the new stations was an estimated $6 million.

“I asked at the time if the cost would go up if we did not approve them both, and the chief said no,” said Post. “It is more likely that costs will go up over time than down, so tell me what this is going to cost in three years. Is that number accurate?”

“I wouldn’t put out any statement that the economy is going to turn around and straighten up,” said Burgin, “and right now is the worst market I’ve seen in the 45 years I’ve been doing this. But if I can keep to the time line we’ve presented, I feel pretty good that the number I’m giving you is solid.”

Burgin said the targeted timeline is to have the project ready for submission of bids by October. The project could then be ready for construction in December.

“Let’s say it’s ready for construction January 1, 2023,” he said. “It will take 15 months to complete, which puts us in April, 2024.” He noted there is a possibility of a 90-day delay due to government processes, but that would still mean a new station could be up and ready by July 2024.

The proposed new building would have three bays and would house two companies, Engine 3 and Ladder 4, along with a police substation, a fire safety education center and an outreach center. Plans include plantings along the wall that would enclose the back of the property behind the new station, though it would take a few years for those plantings to grow and create a full visual barrier between houses there and the fire house.

“Well, I think I can live with that,” said Post, who lives just behind the site. “I think it means I’ll have one of the safest houses in town.”

Parnell pointed out the new location would reduce the physical overlap of coverage area that currently exists and will allow “better response to the northern area that had been some concern.”

Asked if it might help the department’s ISO rating (Insurance Service Office), Parnell said it “will solidify our current rating, which is a 1, so it can’t get any better but it will solidify it,” said Parnell.

Mayor Karen Alexander asked if the cost of the project would be “all new debt,” or if there is some old debt that will fall off the city books and this could take its place.

“In August, 2024, some debt will roll of the books,” said Finance Director Wade Furches, but that money has already been allocated elsewhere, so this would constitute new debt, he said.

“How can we justify increasing our debt?” asked Alexander. “We have not had a tax increase and we don’t want to do that, but we recognize this is a public safety priority.”

Furches said the city hopes to have some increases in revenue, and that any debt taken on would likely be stretched out over 20 years, rather than the 15 the city has agreed to on past financing, and that the city could use its remaining ARPA funds to help offset the cost. Alexander said in order to use those funds, the city would need public input.

“I know this has been a priority in the past, and I wanted to bring this presentation to the council for an update and to confirm that it is still a priority,” said City Manager Jim Greene, who is new enough to the city to have missed construction of the previous station.

Though they did not take any official action Monday, council members unanimously agreed the construction of the new station remains a top priority and asked Burgin and Parnell to continue their planning efforts.