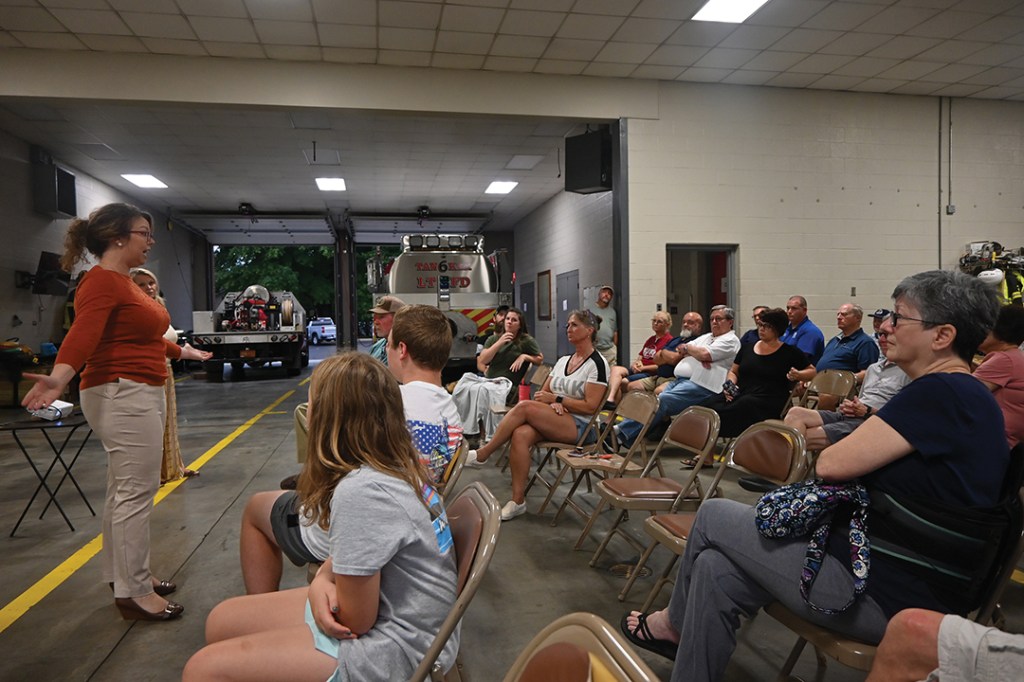 SALISBURY — Homeowners along Mooresville and Briggs roads came together Thursday night for a community meeting at Locke Fire Department to discuss what could be done to stop the construction of a nearby Dollar General.

More than 20 such stores are already open in Rowan County, with another one being constructed on Old Mooresville Road and one in the planning phase that concerns those who gathered Thursday night. Six Dollar General stores are less than 7 miles from the corner of the one under consideration.

While community members voiced concerns over the need for so many Dollar Generals, they noted issues involving fire and traffic safety, and water runoff as areas of concern.

“It’s not the nicest, cleanest store to begin with,” said Scott Grumbles, a resident near the rezoned property. “Boxes and inventory stacking the aisles, only one person working the store. Why don’t you take the money you’re gonna put here and put it into fixing the existing stores?”

Many of those in attendance agreed while also noting that the extensive inventory covering the floor makes the store not accessible for those in wheelchairs. Some voiced concerns over seeing fire exits blocked.

However, the strongest argument against the proposed new construction was the damage to Rowan County’s watershed that is part of the rezoned property. The concern of parking lot water runoff into the adjacent cornfields, ponds, creeks and well water of surrounding homes worried many. The proposed site is located at the headwaters of a water source that flows into Sloan Creek’s watershed with a junction of Sloan and Back creeks.

Safety was another topic discussed during Thursday night’s meeting. A study performed by the N.C. Department of Transportation in 2019 showed that 7,200 cars drive down Mooresville Road each day while the design capacity is 13,600 vehicles. Briggs Road has a design capacity of 12,500 with an average of 4,200 vehicles a day. However, the presentation made by the community questioned if the study was accurate for 2022. With another store, traffic congestion was voiced as it could cause more frequent accidents and hamper Locke Fire Department’s response to emergency calls.

Increased traffic was not the only safety issue. Six crime reports over the last five years were brought up at the meeting, with four involving firearms in stores at Mooresville Road, Statesville Boulevard, Salisbury Avenue and U.S. 601.

“If we all get ourselves together as a community and we show the county commissioners our concerns and we all take our time and hit on different issues, we may could make a difference,” said Tiffany Wallace, who has been following the development and lives on Mooresville Road. “If it’s not too late on this one, at least we can maybe make a difference on the rest of the ones that will try to be put in the county.”

Wallace proposed a plan to those in attendance to have the planning board and commissioners put an ordinance into place that would state small box discount stores (such as Dollar General) could only be put within a certain mile radius of each other. According to Wallace, that is the only way to control how many Dollar Generals can be placed in the county. The ordinance would also have to state that a conditional use permit would need to be submitted for construction of such a store.

She then presented considerations in drafting the ordinance:

• Define “small box discount store,” which includes square footage, what is sold in the store and the price of items.

• Limit on dollar store density (how many can be put in a certain mile radius).

• Supporting alternatives to dollar stores (what other businesses can be considered).

• Public participation (coming to the planning board and board of commissioners requesting a new ordinance).

Rowan County Commissioners Greg Edds and Mike Caskey both attended the meeting. After the public voiced their concerns, Edds spoke and noted the county board is always looking out for the community and said commissioners had called the Dollar General corporate office about safety.

“We are not going to approve any more until we are assured that the issues folks are worried about are addressed,” he said, adding commissioners plan to meet with Dollar General officials to discuss how to tackle the public concerns.