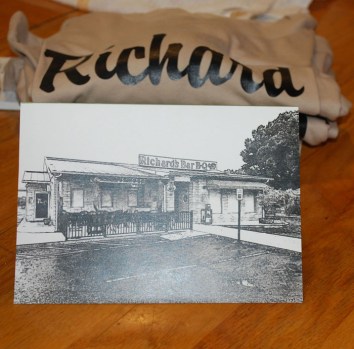 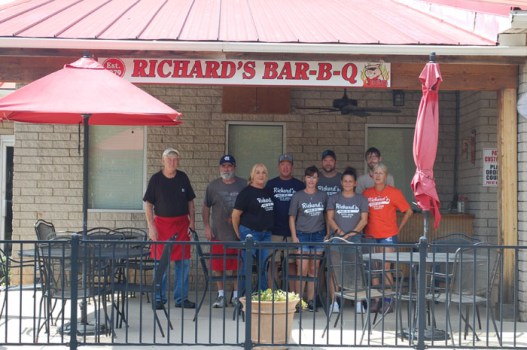 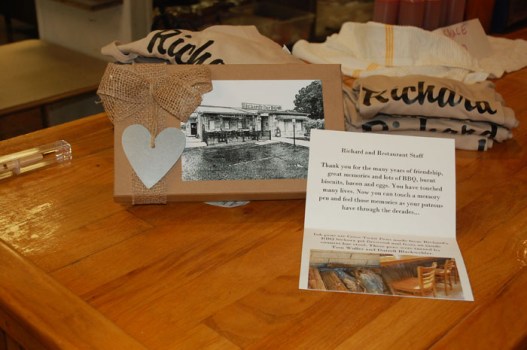 Memorabilia and gifts marking the closure of Richard's BBQ 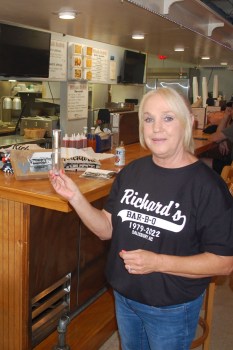 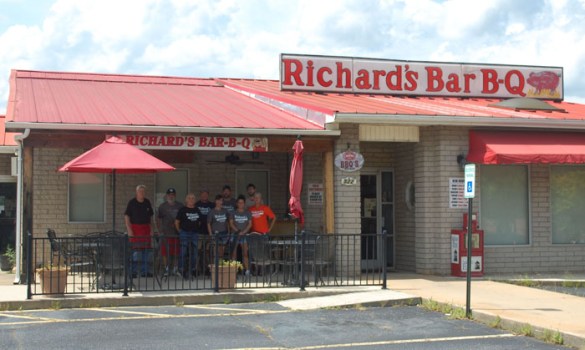 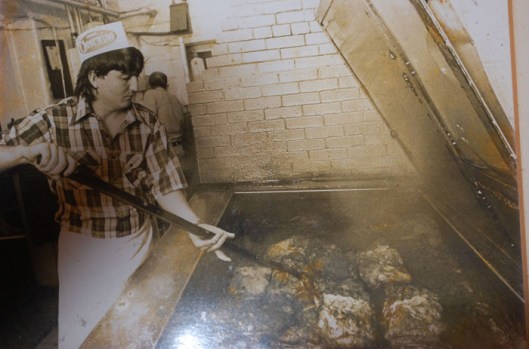 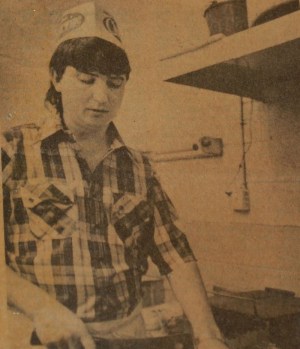 Richard working the grill in 1979 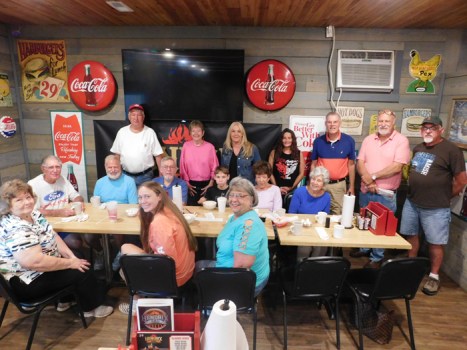 Richard and Debbie Monroe are surrounded by former restaurant regulars and staff members, most of whom they have not seen since Richard's Barbecue closed at the end of July. They joined the group at Hendrix BBQ in Spencer for coffee and reminiscing. A few of the members are hopeful the couple will consider joining them for breakfast from time to time, but at the table and not back in the kitchen. Photo by Elisabeth Strillacci/Salisbury Post

SPENCER — At about 8 a.m. Tuesday morning, in the back of Hendrix BBQ on Salisbury Street, three tables were pushed together to make room for a group of friends and former co-workers gathering together for the first time since Richard’s BBQ closed at the end of July.

And Richard Monroe, owner of Richard’s, and his wife of 51 years, Debbie, joined in.

Monroe’s journey began in 1970 when he worked for T&F Barbecue, which was owned by Doris and Tom Heffner. He and Debbie met when they were 15, and the next year, 1975, Monroe became manager of the restaurant. He then took over as owner in 1979.

In time, he opened a place of his own, aptly named Richard’s BBQ, which Debbie said was perfect because “it was absolutely his love, his place.” She helped with bookkeeping and money matters, but for the most part, she “took care of the home, and the children, and personal finances, and let him do what he loved.”

And the customers who came in loved it as well. So much that for many, it became a home away from home.

“We had customers who would come in and start the coffee if one of the waitresses was running late,” Monroe said. “They’d fill out their own tickets and stick them on the wheel, then pour their coffee and when staff came in, they often increased their tips because they were worried and wanted them to be OK.”

A group of nearly 30 folks made a habit of having breakfast at the restaurant at least five days a week, while others came less often, but just as consistently.

Darrell Blackwelder, Robert Collins and Mike Jacobsen did what they called The Breakfast Tour years ago, visiting 27 local restaurants for breakfast.

“There were several that were wonderful,” said Jacobsen, “but Richard’s was bright, welcoming, made you feel immediately at home. It was the kind of place you wanted to take a friend for breakfast.”

Blackwelder described the banisters that gave each table the feeling it was its own space, and noted “several people had their own tables, and if anyone tried to sit there, they were told it was reserved.” Monroe confirmed that.

“Mike and I worked at the railroad when we first started going to Richard’s,” said Collins, “and we’d get there early, slip in the back door, and pour a cup of coffee and wait for breakfast.” Waitresses usually knew what regulars were going to order, and typically had drinks on the table before guests sat down.

Monroe said one customer, Allen Rouzer, was in early to help get things started “from day one to the last.” Rouzer would start the coffee, do whatever might need doing, and in winter, if there was snow or ice, he would be outside with a bag of salt. And he was not alone. Monroe credits Blackwelder with managing all the plants in and around the restaurant.

“Richard had a really nice outdoor space,” said Blackwelder, “and we had arranged some hibiscus plants in pots, with flowers around their base, I mean these were heavy planters, 50 pounds or maybe more, and one night some lady came over and picked one up and put it in her car and drove off with it. I do not know how in the world she picked that thing up but she did, they caught it on the security cameras next door.”

Monroe said he wanted people in the community to know what the Rowan Salisbury Schools are going to do with the former restaurant, though he said it could be subject to change.

“They told me they plan to use it as a meeting and activity center,” he said. He was told there are groups that meet at least once a month, and he left the shop in pristine condition, but he also left some equipment that they can use. “I left a cook top so they can make hamburgers or hotdogs, and some warming ovens so they could heat up food that is brought in, and I left a sink for dishes, just some basic equipment so they can have food, and some tables and chairs for meetings and work surfaces. As I said, they may change their minds but that is my understanding. That way they don’t have to rent a hall or facility, and if they want to do food themselves instead of catering, they can, or they can at least keep food hot.” He said he was glad to know the facility would be going to good use.

“We had people ask us why we didn’t just find someone to manage it for us, and we could take time off, vacation, rest,” said Debbie. “But that just would not work, because no one does it the way Richard does. They’d want to put their own stamp on it, and rightly so, but that would just leave him doing more work than ever, going behind and having to put everything back his way.”

Just before Monroe’s last day at the restaurant, many of the regulars gathered at the shop to celebrate his long, and loved, place in town and in the county. Two regulars in particular, Blackwelder and Tom Waller, had decided they wanted to use their hobby to honor Richard.

“Tom and I turn pens out of pieces of wood, sentimental pieces,” said Blackwelder. “I have pens made of wood from all over the world, and they all have meaning to me. So, Tom and I said we needed to find something to make Richard some pens.”

What they found was a wooden bar stool and a piece of hickory from the last delivery of wood for Richard’s barbecue fire. And they made six pens each.

At the farewell gathering they presented the pens to Richard and Debbie. Monroe said it upset him.

“What he means is we cried,” said Debbie. “Upset in a good way, very emotional. But so very thoughtful.” The pens were enclosed in beautifully wrapped boxes decorated by Blackwelder’s wife, and included a commemorative card describing where the pens originated.

Monroe said he doesn’t necessarily miss the work, though he knows he will never just sit still.

“But the hard part is missing the people, who were not customers, really — they were family,” he said. “Still are.”

“Yes, they were like family, and I do miss them every day,” said Juanita Eagle, who waitressed at Richard’s for almost 20 years and who was seeing folks she had seen nearly every day for the first time in more than two weeks. “I loved working there, loved working for Richard and loved the people who came in, who became friends.”

Monroe and Debbie have raised two daughters, now on their own career paths, and for years, fed a community and provided a happy, second-home meeting place. Regulars are now having to find a new “regular” spot, and though most are relocating and moving on, Jacobsen put it succinctly for all when he said, “There will just never be another Richard’s.”