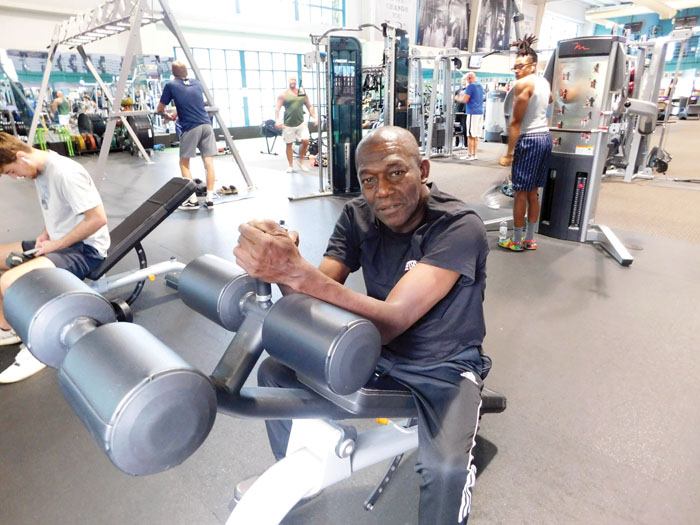 John Peterson smiles after doing 283 crunches from a 45 degree angle in 180 seconds. He says he doesn't get tired - just sore. Photo by Elisabeth Strillacci, Salisbury Post.

SALISBURY — For years, local resident John Peterson has been jovially known as “ab man” at the Forum, where he exercises more than an hour at a time, often daily.

The nickname stems from Peterson’s ongoing and increasing efforts to break records for the number of crunches done in a specific amount of time.

In 2018, he did 6,774 crunches in one hour and in 2021, he did a total of 13,994 crunches in two hours. This past Saturday, he had hoped to try to establish a record for the most crunches in three hours at the East Spencer Community Day, but his counter was not available. Instead, he did 1,705 in one hour’s time.

‘That was just a demonstration,” he said, noting he did it in conjunction with Get Up and Glo, one of the participants at the event.

Then Monday morning, he hopped on a bench set at a 45-degree angle and proceeded to do 283 crunches in two minutes, or 180 seconds, well over 1 per second.

Peterson has exercised since high school, and firmly believes it is never to late to do so.

“I never let myself get out of shape,” he said. “I work a lot, at my job at Chewy and part time with FedEx and then a few hours here and there washing cars at Steven Higgins. I keep moving, and I don’t do what a lot of others do — I don’t drink or smoke or have anything to do with drugs. I’ve seen what it can do — destroy lives and careers and families.”

Raised in China Grove and still a local, Peterson said he does the crunches and tries to break records to inspire others.

“I want especially kids but everyone to know that exercise is important,” he said. “I have no health problems, not even arthritis, because your core is everything. If you keep that strong, everything sort of goes along with it.”

In addition, he hopes in the future to attach charitable donations to his efforts, whether it is asking for donations of coats in winter, or for contributions to support the Salvation Army or some branch of the military, Peterson said it is not about personal fame, but about inspiring and helping others.

His wife, Beverly, said he has always been an exercise fan, and that he seems to “never stop moving.” The couple married five years ago, a first marriage for John, and she said though she tries to keep up, he is in such constant motion it is nigh on impossible.

“But he is not afraid of hard work,” she said. “He is a wonderful provider, and I’m very, very proud of how hard he works and the effort he puts in.”

Peterson said he dedicates his efforts each time, and this most recent workout he dedicated “to my wife, and to my friend Milton Smith of Kannapolis, but most of all to my nephew, Antonio Howell.”

Howell died in the last month after having a massive heart attack related, it is believed, to COVID.

Peterson played football (defensive and tight end) and ran track (one and two mile)  in high school, graduating from South Rowan in 1976, and has been a fitness buff ever since, but a natural one, taking no substances of any kind.

“When people go to the gym, they have a purpose,” he said. “This is my purpose. To show that no matter your age, your current fitness level, whatever else is going on in life, you can still move, you can still work to get healthy.”

Peterson’s long-term goal? To see how many crunches he can do, with a five-minute break every hour, in 24 hours straight.