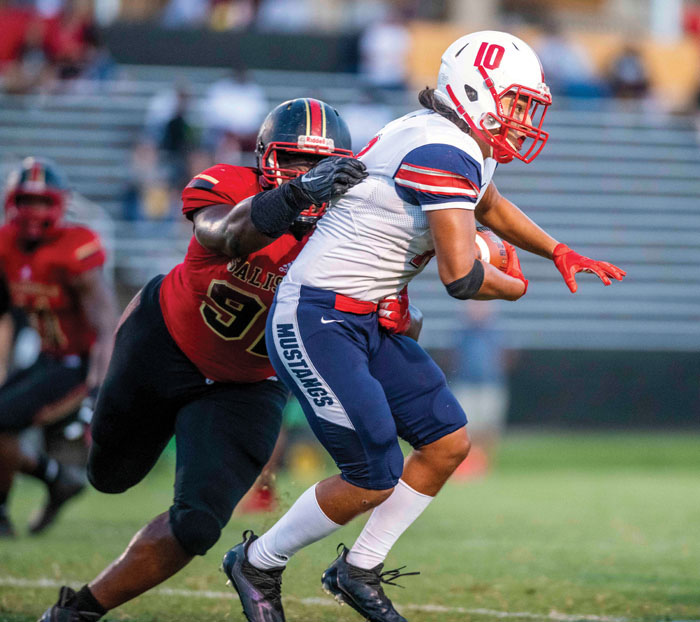 “We’ll be better,” said Fitz, who is entering his sixth season at the helm. “Now we might go out there and stink it up, but I really feel like we’re already better on offense than we were any time last season.”

The 2021 offense never got anything going until the Mustangs finally achieved their only victory in late October. East took out its frustrations and scored 36 points to beat South Rowan.

But other than that feel-good outburst against the Raiders, the scoreboard showed 0, 6 or 7 for East in every game. East totaled a meager 77 points on its way to a forgettable 1-8 campaign.

Basically, brief East offensive possessions and lots of turnovers put the defense in difficult situations every Friday, and eventually that unit wore out. East allowed 331 points.

So there’s a lot to fix on both sides of the ball. Fitz, who has been around a long time in the high school and college ranks, including a defensive coordinator stint at Catawba, knows how to fix it.

Whether East has the experience and the personnel to get the job done remains to be seen, but there are some reasons for optimism.

There have been staff changes, with some energetic young coaches added to the mix.

“The old folks are Kelly Sparger — and me,” Fitz said.

The ageless Sparger will be coaching a DBs group that includes Logan Dyer, his grandson.

East’s depth has improved. There are more bodies at practice.

“Our numbers are back up to about 80 kids now,” Fitz said. “During COVID it was easy for kids to sit around and do nothing. It got to be a real struggle. But maybe we’re getting past COVID now. I think we’re back on track.”

Fitz had a 6-6 team that contended for a conference title in 2018 and Kenneth McClamrock coached the most exciting 7-7 team in county history in 2014.

But East hasn’t won more than it’s lost since it went 8-5 under Danny Misenheimer’s direction in 2012.

East will try to reverse that trend with the same schemes the Mustangs employed last year. Fitz is hopeful East learned some things and can move the chains more and turn it over less.

East’s offense will be built around short, quick passes.

East graduated QB Aiden Schenck but has several receivers back. That group includes Cole Eagle, AJ Goodman and Dyer. Jordan Brooks and Tyquan Danzine will also be factors in the passing game. Danzine was one of the surprises of the preseason.

The new quarterback is expected to be Gavin Walker, a junior who has been running the same offense on the jayvee team. Sophomore Will Klingler, the brother of former East baseball star Charlie Klingler, is the other potential QB.

When East looks to move the ball on the ground, Tijon Everhart and Joshua Roman-Soto will probably do the toting.

On the offensive line, East has an anchor in right tackle Caleb Shugart. Brothers Timothy and Brandon Grooms and Connor Yon also have experience.

East should boot it well, with Eagle handling the kickoffs and probably long field goals. Carter Honeycutt will kick PTS and short field goals. Soto was one of the South Piedmont Conference’s top punters.

McCall Henderson, who has bulked up tremendously, is very strong and should give the Mustangs a fine nose guard. Gaven Trexler and Ahmed Ali have looked good up front in practice.

The linebacking crew should be stout. Soto will be one of the inside backers and he’s probably East’s most highly regarded player. Treyvon Hamilton is a returning starter. Morgan Padgett, former safety Blake Hill and Christian Stapf lead the outside linebackers.

Evan Porter was an all-conference DB last fall, while Dyer also stood out. Other DBs who are being counted on are Riley Kimmer, Joe Burleyson and JJ Jones.

There are enough returners and enough young talent to give East realistic hope of moving up in the SPC standings.

“Concord was very good last year, so they’re probably still the team to beat in our conference,” Fitz said. “We just want to keep working and keep getting better.”