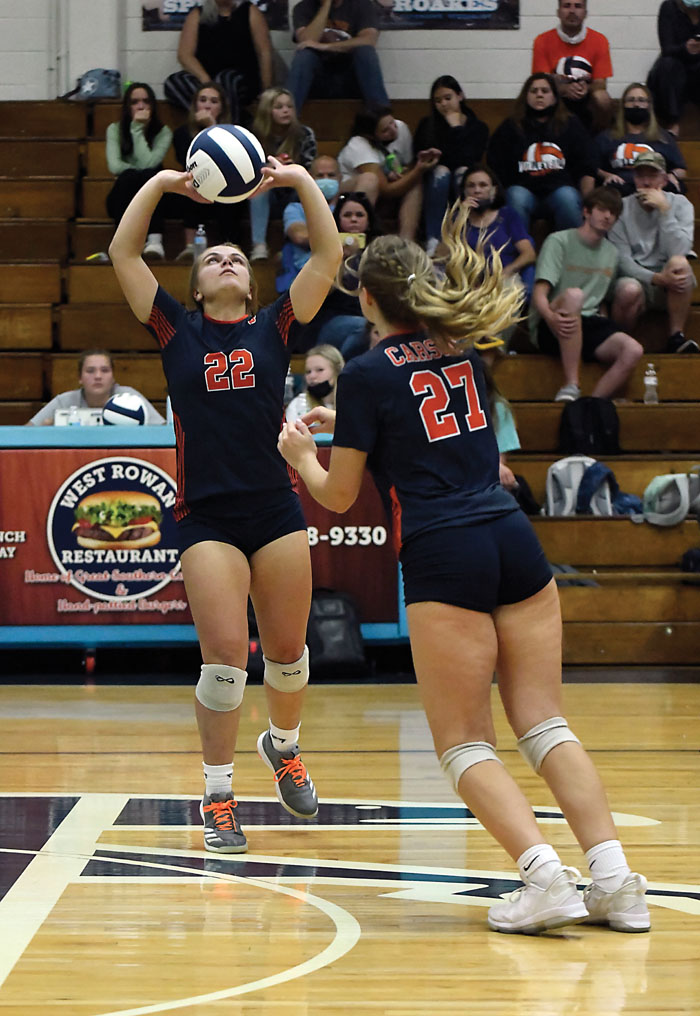 Last year’s prime setter Elly Davis (22) will be moving to libero while Gianna Patella (27) will look to add to the 257 kills she notched. File photo by Wayne Hinshaw

Second in a series of reports on local volleyball teams …

That’s significant because the NCHSAA lists only one coach with more career volleyball victories. That’s Sherry Norris, who racked up 732 at Chapel Hill from 1977-2013.

Unless things veer off the track in China Grove, Rogers will surpass 732 this season. 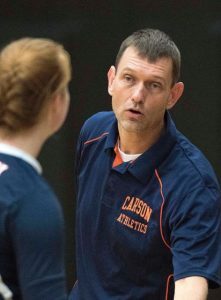 The majority of Rogers’ wins came at West Davidson where the 1986 East Rowan graduate turned a struggling program into a perennial winner from 1990-2008, but nearly 300 have come during 13 seasons at Carson, where he took charge of the program in 2009.

Carson took command of the county not long after Rogers arrived to teach biology — and volleyball. That rein lasted almost a decade before West Rowan caught up in 2018 — and then pushed past the Cougars in 2019 and stayed ahead of them.  Tori Hester, KK Dowling, Kelcie Love. West coach Jan Dowling has enjoyed a train of outstanding players in recent years.

Carson’s 2012 and 2013 teams won regional championships and played for state titles. While West Rowan and South Rowan have made strong playoff runs with exceptional teams in recent years, they haven’t made it to the biggest stage. Only Carson has been there.

Rogers’ Carson teams won 20 or more games in 10 of his first 11 seasons in China Grove, but the Cougars have taken a licking during the COVID years. The Cougars got shorter. They lost some bounce. They lost some depth. Carson went 6-8 in 2020 and 13-15 in 2021.

Not that it was an awful 13-15. Carson still tied for third in the eight-team South Piedmont Conference, split with South Rowan and won a 3A playoff game, but West’s Falcons handled the Cougars three more times, and by Carson’s standards it was a down season.

“I haven’t been sleeping very well because I hate losing, ” Rogers said. “COVID hurt us. We lost some players we’d been counting on.”

Rogers is certain the future is brighter. He believes this could be a turnaround season.

Middle hitter Patella was involved in about two-thirds of Carson’s blocks. She also was third on the team in digs.

Bivens is a right-side player who gives the Cougars some much-needed height.

Carson graduated quite a few seniors, with digs leader Allie Burns being the toughest to replace.

Davis, last season’s main setter, shifts to libero to replace Burns. Davis was second on the team in digs last season, and she’s an efficient server who accounted for 62 aces.

Sophomore Maggie Cross got varsity experience as a freshman and is being counted on as the starting setter.

Versatile sophomore Kaylee Thonen, who had 56 aces as a varsity freshman, will be a key player.

More depth will come from a very strong freshman group.

Rogers coached most of those freshmen when they won the middle school championship at Southeast last spring.

Some of those girls will turn up on the varsity this season, and they should be a factor for years to come.

“It’s a strong class, and they give us the best depth we’ve had in the program for a long time,” Rogers said. “They’ll help us get back where we want to be.”

Playoffs: Lost to Ashe County in the second round