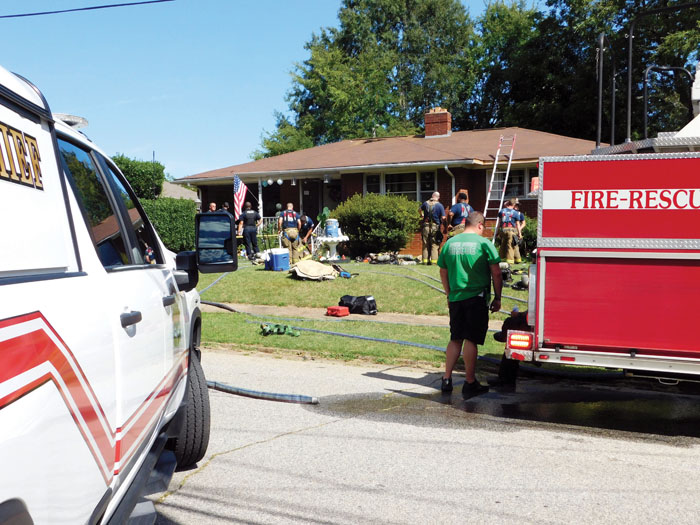 A house fire in the 400 block of South Shaver Street left little external damage as firefighters collected their gear after the fire was extinguished. Elisabeth Strillacci/Salisbury Post

SALISBURY — A report of a house on fire in the 400 block of South Shaver Street was called in to 911 just after 3 p.m. Saturday, according to fire officials.

The first fire engine to arrive reported seeing smoke from the back of the house, and the first firefighters to go in the house located one occupant, a woman, that initial reports say was treated for smoke inhalation. Additional information on her condition was not available as of press time, but she was taken as a priority patient to Novant Health Rowan Regional Medical Center.

The fire had managed to get into the attic but Salisbury Fire Department Operations Chief David Morris said crews were able to vent ceilings in the ranch-style house and get the fire under control quickly.

He said the first engine arrived within two minutes, and “it’s a very rough estimate, but I’d say they found the occupant within five minutes,” he said.

Damage to the house was primarily in the back and not visible from the street.

Rebecca Gill, who lives across the street from the home, said she knows the couple that live in the house.

“They look after me,” she said. “She cooks for me, and they are both always checking on me. I’m 87, and they take care of me like they were my kids.” She said she is hopeful that the woman recovers, and expressed concern for the husband, who was apparently not at home when the fire occurred. The names of the residents have not been released.

“We would like to note that we appreciated the help from Miller’s Ferry and Granite Quarry fire departments as well as Rowan County Emergency Medical Services and the Salisbury Police at the scene, and of course the departments that provided backup coverage of our areas while we are here,” Morris said. “It’s a team effort around here, couldn’t do this alone.”