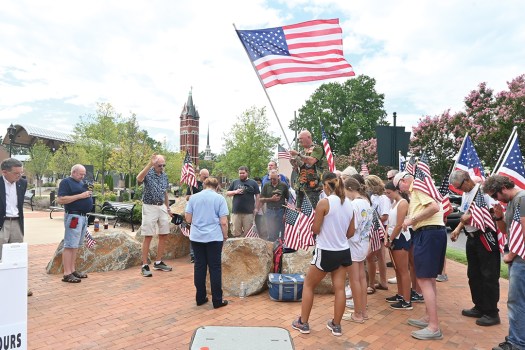 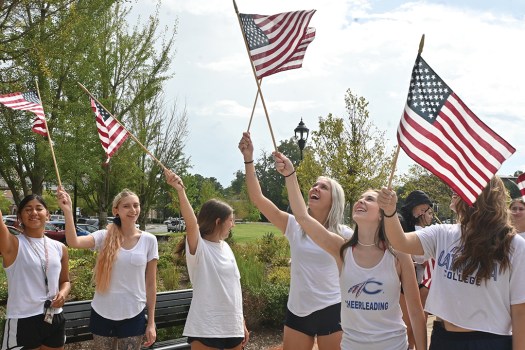 SALISBURY — The veteran who has been among those holding a flag at Bell Tower Green in an effort to get the city to install a permanent one and who told the Post last week that a passing motorist displayed a gun has filed a police report, according to Salisbury Police.

Chief Jerry Stokes confirmed on Saturday that “we have a report of an incident and it is under investigation.”

Thomas “Ski” Kopetzky said he had the barrel of a gun pointed at him Wednesday afternoon and was told, “Don’t be here tomorrow.” Around 3 p.m. Wednesday, he said a “dirty, white Hyundai or Honda” pulled up to the intersection of West Innes and Church streets and the driver with face tattoos pointed the barrel of a gun at Kopetzky.

The report taken and filed by police primarily concurs with Kopetzky’s report, stating “Unknown person brandished a weapon without pointing it at anyone and stated ‘you better not be here tomorrow’ at the protestors standing on the corner of West Innes St and South Church St. The person was in a white, cream or yellow colored Hyundai style vehicle.”

Kopetzky said he did not think too much of it since he has had guns pointed at him all his life.

“I don’t fear anything,” Kopetzky said. “I swore to protect this country as a Marine and I’ll continue doing my part.”

According to him and Carl Doby, another veteran who is also a supporter of installing a flag at the park, people drive by daily giving them the middle finger and trying ways to shoo them off the corner. However, they also said that many cars honk and wave at them in support as they pass by.

“We want our veterans to be recognized for how they served this county,” Doby said. “Not everybody agrees. I don’t understand because they’re all American patriots.”

Kopetzky did not report the incident to the police because he said such threats are similar to others he faced as a Marine. Instead of being intimidated, he decided to continue raising the American flag until a decision is made to put one in at Bell Tower Green.

Sgt. Russ DeSantis of the Salisbury Police Department said, “I would advise anyone who has anything like this happen to them to call 911 immediately.”

At its last meeting, Salisbury City Council heard from veterans who were restating their request to have a permanent U.S. flag installed at the park, to the left of the entrance. They were told that any changes to the park would have to go through a process by an advisory board to be recommended to the council.

There had been allegations that Mayor Karen Alexander had signed an agreement with the previous, private owners of the park that a flag pole was not to be put up, but according to Alexander, that is not true.

“In no way is the council against anything,” Alexander said. “The mayor has no unilateral control, they are a spokesperson on behalf of the entire board. We want to respect the property because it was funded by many private donors, along with state and county donations. To make any change, it is to be recommended by an advisory board before coming to the council for a vote of approval.”

According to the mayor and a Post “Ask Us” article, $9 million was donated by individuals and families to fund the purchase and construction of the park. The remainder of the $13 million price tag was funded by corporations, charities, the city, Rowan county and the state, state legislators and local civic clubs.

The only agreement signed between the council and the previous owners was that the city would establish a new board to oversee the future of the park and any applications for additions or changes.

That board, called the Bell Tower Green Advisory Committee, is currently seeking individuals to fill three general public seats that will join four seats filled by members of the previous board. Community members are invited to share their thoughts, plans, apply to have additions or changes, and the board will vote on whether or not to forward the request to the city council.

The advisory board would also include one appointed city council member, but that person would not be able to vote on applications. Instead, they would serve as a liaison between the council and the board.

Dozens of supporters and veterans came out to Bell Tower Green on Thursday afternoon for a rally and to say the Pledge of Allegiance, which was led by Rowan County veteran of the year Troy Horton. The group then joined in prayer with veteran Jim Duncan before lining West Innes Street in front of the park, singing the country’s anthem and greeting vehicles passing through downtown.

“I lost a lot of family behind this flag,” said veteran Hercules Shannon, who attended the rally.

“We’re here to stand behind them,” she said. “The flag is a symbol of everything they served for.”

Editor’s note: This story has been updated to note a police report was filed.