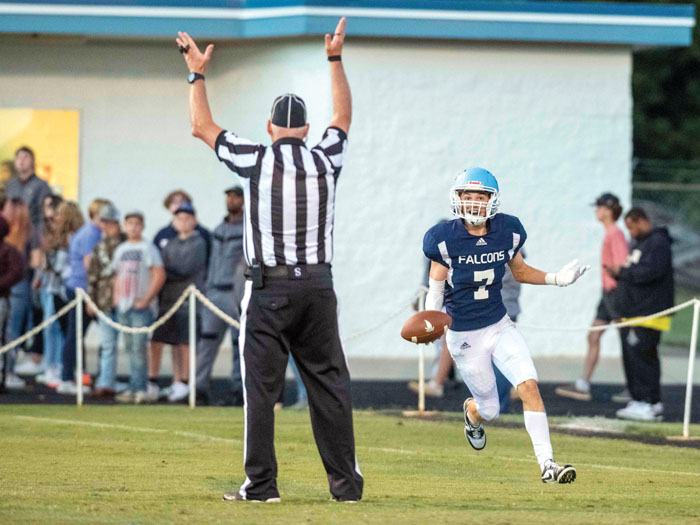 West Rowan’s Paxton Greene (7) scores a touchdown last season and will look for the end zone early and often this year. File photo by JON C LAKEY / FOR THE SALISBURY POST. 9/24/21, Mt Ulla,NC.

West Rowan’s dynamic run of three-peat 3A state championships under the direction of the late Scott Young took place 12 years ago.

Thirtieth birthdays soon will be celebrated by the young men who put footballs in end zones and put up those banners.

West’s last conference championship was earned 11 years ago, which doesn’t seen possible, but it really has been that long since the strapping fellows in the light blue uniforms have won anything.

That means West has about 30 more players than anyone else in the county. Numbers aren’t everything, but numbers matter, Numbers mean depth and the ability to withstand the inevitable injuries. Numbers mean competition for playing time. Even if you don’t win the job, you push the man who beat you out to get better.

“You look out there and see 105 guys, and it’s a little bit overwhelming,” Kraft said. “The goal is the same as always — championships.”

Still fiery after all these years, assistant Tim Dixon is back for his 27th season.

“They bring energy every day and we’re cooking with gas on both lines,” Kraft said. “We’ve had a really good summer.”

West’s championship hopes, at least as far as ending the conference drought, are still realistic. The SPC was a respectable 3A league last fall, but it wasn’t overwhelming.

West had a good  team, especially on the offensive side of the ball where Akin Robinson and Cayleb Brawley piled up rushing yards behind massive Josh Noble and Noah Loeblein shattered defenses with pinpoint passes to Peter Simpson and Garrett Fesperman. West averaged 35.4 points per game. Win No. 7 in a 7-4 season was special, in overtime at North Lincoln in the second round of the playoffs.

The bad news is that all six of those offensive standouts are gone. They’re not part of the 105.

Five graduated. Simpson, who would have been the offensive centerpiece for the Falcons in 2022, has transferred. Social media posts indicate he’ll be playing his senior season for North Davidson.

“He’s a great kid, no ill will at all and we wish him the best,” Kraft said. “But his loss was unexpected. That came at us out of the blue.”

Simpson figured to give new QB Lucas Graham an exceptionally athletic target, as he got settled in. Graham, who spent the summer playing second base for the Rowan County American Legion baseball team, can sling it, but most of his receivers will have very limited varsity experience.

“Lucas will be fine,” Kraft said. “He’s that kid that’s been waiting on the sideline for like 10 years to get this chance. He’s smart. He understands the game. He’s got a really good feel for playing quarterback, and he’ll get us in the right play.”

The tight ends are Jared Richardson and Abe Davis. West often makes good use of the tight end as a pass-catcher.

Evan Kennedy and Adrian Stockton are critical to the offensive mix. They are swift athletes who will be counted on for momentum plays.

“Stockton is lightning in a bottle,” Kraft said. “He’s always been that jet-sweep guy, but he’s going to get the chance to be a lot more than that.”

Kennedy, a talented sophomore, is the future. He could break out this season whether he lines up as a slot receiver or as the change-of-pace running back. He’ll also be a kick returner.

The offensive line is a West strength almost every year. That hasn’t changed.

Right tackle Christian Hercules, the school’s heavyweight wrestler, right guard Braydon Haglan, center Blake Rogers and left guard Tyler Cline have been getting after opponents for years. The pleasant surprise of the preseason has been left tackle Asriel Mauney, who returned to the team after not playing since COVID. He’s impressed the coaches. Robert Coleman will be another vital o-lineman.

West plans to have a former defensive lineman, Landon Jacobs, handling the bulk of the ball-carrying duties. Jacobs brings about 210 pounds to his new job. The hope is that he can power through defenders and move the chains consistently.

“He’s a load,” Kraft said. “He’ll run it right through your chest.”

West’s defense wasn’t earth-shaking a year ago, but it was pretty good, especially when you consider the Falcons play some tough 4As as non-conference opponents. West allowed 22.4 points per game.

West’s deepest position will be the defensive line. Alijah Gray, who can play inside or outside, has a chance to become a household name. He’s played a lot of snaps for the Falcons.

Kraft expects sacks from Hunter Miller and Braxtyn Barger. Quinton Lofton, Dayvion McHenry and Kam’ron White will be key guys in the rotation up front.

“We want to see who emerges from that group as that Alpha dog,” Kraft said

The secondary lost tough kids to graduation, but Kraft likes what he has. Rangy Lee Vaughters and Matthew Gabriel are expected to man the corners.

James Francis III, whose father was a Shrine Bowl linebacker for the Falcons when West won its first conference championship in 2000, starts at the other safety.

On paper, West still looks good, but when your schedule starts with Salisbury, Mooresville and Davie, you’d better be.

Playoffs: Lost 28-15 to Crest in second round