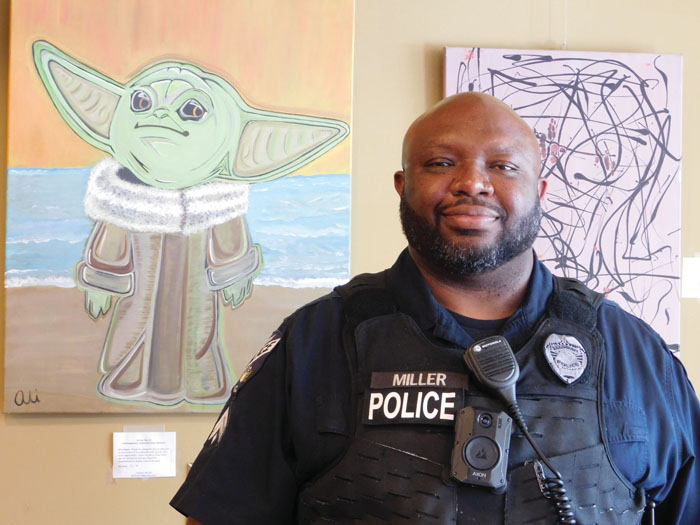 SALISBURY — For some, the idea of spending an entire work shift among pre-teens and teens is not ideal, but for a select few, it is the best place in the world, and the kids they are with know it.

Isaac Miller, who joined the Salisbury Police force seven years ago, is one of those rare people who understands middle and high school students, and the students understand him.

Miller grew up in Norwood, in Stanly County, the second of three children to a mother that worked two jobs to keep her family fed, clothed and housed. He is quick to say that he knows how it feels to stand in line at the grocery store and have kids behind him laughing because he was using a food stamp card, but he is just as quick to sing his mother’s praises for all that she did to keep her family taken care of, and loved.

“I see so much of myself in the kids I work with,” he said. “I want them to know there are options for them, they can choose to have a different life than what their family has.”

Miller and his older brother (by two years) are, in his words, “exact opposites. He is essentially a career criminal, spent nine years in jail, and was well known to police, which meant they assumed, as his younger brother, I was a bad kid, too.” Miller said he got knocked around a few times just because of the association, and as he grew up, his interactions with police overall were not great.

“I know what it’s like to get pulled over just because,” he said. Even so, the decision to get into uniform to help improve interactions with police among the Black community did not come right away.

“I had no idea what I wanted to do with my life,” he said. When his mother died when he was 21, (and his younger sister just 11), he said it took a few years to get past the grief.

At 32, he finally got the message “from God” that policing was where he belonged. He attended Basic Law Enforcement Training, completing field training in January of 2016. Two months later, he was assigned as A school resource officer.

Initially, Miller said he was nervous. At the time, he lived in Indian Trail, and the commute to and from work was long. During the first weeks, he said he thought about the kids he was trying to get through to on his way home, and on a few days, ended up in tears because he knew where they were coming from and all they were feeling.

“One of the toughest kids I dealt with was a Harry Potter fan,” he said. That gave him a breakthrough at last, as he was able to join in the conversation, and the student realized they had something in common. “We were casting spells on each other by the end of the day, and I know that probably sounds corny, but it worked.”

Currently, Miller works in both Knox Middle School and in Henderson Independent School, which serves middle and high school students.

“A lot of people think Henderson is for ‘bad’ students, including some in the police department,” Miller said. “That’s just not true.” Miller said students can struggle no matter where they are, especially if they have no real role models in their lives. He is determined to give them that much, at least.

“Graduation is probably my favorite day at Henderson,” he said. “It’s such a small school that the number of graduates is tiny. But in a school that small, I know every single student by name, and they know it. They are my babies, and they know I really care about them. The tremendous thing is, they reciprocate. They care about me.” The down side, he notes, is when he has to attend a funeral. And that happens more than he wants.

Knox students, although there are more of them, are still important, and he still works to learn their names, and their needs, and to be a reliable resource.

“I’m into video games, and I know there are people who would criticize games where you shoot guns, but I do play with the kids, and while we are playing, and on the headsets, they often let me know they need to talk,” he said. “We’ll go on private mode, and have some really deep conversations. Even just talking face to face, a lot of these kids come to me with things they either can’t, or won’t, talk to their parents about.”

Others who know Miller understand why the kids connect with him.

Officer Jasmine Suber, who has been a Salisbury officer for five years and has seen Miller work up close and personal, said the connection he has with the students is almost palpable.

“I’ve seen the sign-up sheets for the video game tournaments, and the kids lined up at the door to play him or to talk to him,” she said. “I know that there are times when a kid is really struggling, and he wants to take them home. He is incredibly protective of them, and treats them like his own. Which means he expects them to follow the rules, and does not let them off the hook when they don’t, but he also lets them know he still, and always, believes in them, cares about them and expects them to be the best person he knows they can be.”

Some of the conversations Miller has with students can get very personal and very challenging, but he is rarely unprepared and never fails to be supportive.

“There have been times when a kid has told me they have gotten their girlfriend pregnant,” he said. “They will come and tell me, and we’ll talk about their plan, if they have one, or how to make one if they don’t. But I also tell their parents. They don’t always care for that, but it is my responsibility.”

Miller said he does wish more parents would really talk to their children, instead of saying “well, I feed, clothe and house them, what more do they need.” Because even kids need someone to talk to.

“I am very close to all the kids I work with, but they also know that I do have a job, and there have been times when I am putting handcuffs on them,” he said. “I tell them that if they make me do my job, I will, but I also always encourage them to come to me for help addressing a problem in a way that doesn’t end in arrest, before we reach that point. I don’t believe jail is any help. Send a clean-cut kid to jail at 18, and by 24, he’s a mastermind criminal who has spent all those years learning all he needs to know about being a ‘successful’ criminal. It’s not the answer.”

Miller has been married for 11 years, and he and his wife Jocabed, whom he affectionately calls Joca, are hoping to one day have children of their own. He said he wonders if his feelings about the students might change if they have children.

“I have thought about that, and honestly, I don’t think so,” he said. “I mean, my children would always come first, but I don’t think it would make me care any less about the kids I work with.” For them, he has been known to go well above and beyond. Including the time a young female student was kicked out of her home by parents who objected to her boyfriend, but all of her clothes and shoes were at home. It was winter, and the only shoes she had were slides. So Miller took her shoe shopping.

“But you know, teenagers don’t just wear any shoes,” he said. He called his wife, asking “can I spend $120 on shoes?” At first, she told him he did not need new shoes. “They are not for me,” he said. “I don’t do that often, and she is usually understanding, but she does remind me that we do have a mortgage and bills of our own to pay.”

Miller said he knows how it feels not to have an adult to show you the way and be a role model, because growing up, he had just one teacher who showed he cared. And that teacher, he said, is one of the main reasons he is where he is today. Doug Smith, “my seventh grade algebra teacher, who I believe became a principal in Stanly and is retired now, is almost like Jesus to me.”

Smith, when he was informed of Miller’s thoughts, was touched, but not entirely surprised.

“We didn’t call him Isaac, but I do remember him,” he said. “Wow. That’s about the highest compliment you can receive. I appreciate that. He was a good kid. He made the class fun, because he understood when to play and when to work. Really, I loved him, he was just that kind of great kid, who worked hard and did what I asked. You know, there are those kids that you just know are someone special and he was one of those.” Smith said he is grateful to know that the things he tried to impart to students actually got through.

“You would never have known that he came from a family with challenges,” said Smith. “I tried to teach all my kids that it’s not about where you came from, but about where you are going.” Smith said it would appear Miller took that lesson to heart, and is now paying it forward.

Miller agreed that his goal is indeed to give that knowledge and awareness to the students he works with. He might be self-effacing and not readily admit his own success, but the story he related at the end of the interview spoke volumes.

“I was at Walmart with my wife, and a former student (female) texted me, asking if I was in town,” he said. “I said I was, told her where, and she said she was going to have her grandmother bring her over. She found me in the shoe section and gave me a card, but asked me to wait to open it until she’d left, cause she might cry.”

He paused for a second.

“She gave me a Father’s Day card. She said she didn’t have a dad, and that year, she wanted me to be her father.”

Miller said he knows that the SRO position will not last forever, and that when the post ends, he will go back to patrol or wherever he is assigned.

“I serve at the pleasure of the chief,” he said. “So if he says I’m directing traffic for 8 hours, I’ll put on sunscreen and direct traffic. But I know I’ll also, at some point, drive by the school, just to check on the kids.”