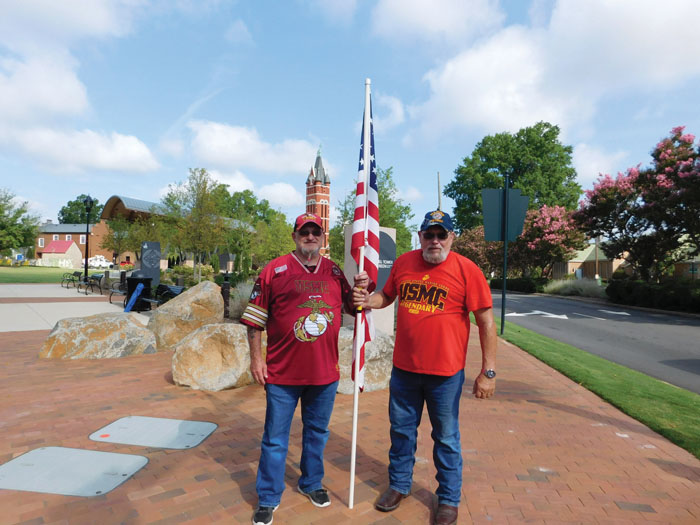 Veterans Michael Catus, left, and Tom "Ski" Kopetzky say a veteran will be at the Bell Tower Green park every weekday to present the flag to the public until the city council or the governing board agrees to put a permanent flag on the site. Elisabeth Strillacci/Salisbury Post

SALISBURY — Sometimes things that, logically, appear to be a no-brainer take longer than it feels like they should, and sometimes, it begs the question ‘what’s the hold-up?'”

That seems to be the case with the request to put an American flag at the entrance to Bell Tower Green park.

Veterans in Salisbury and Rowan County have been asking the city for months to approve putting a flag pole and American flag at the park, which now belongs to the city.

Initially, the park was privately owned, and was operated by a private board. But when the park became city property, veterans began asking about putting in a flag.

At last week’s city council meeting, Mayor Karen Alexander told veterans who showed up to speak during public comments on the issue that while she understood their desire to have a flag installed in short order, “unfortunately, there is a process to it.” Fortunately, she added, the city is now one step closer to their request.

The city is establishing an oversight board for the park that has seven seats, three of which are now open to public volunteers. Once the board is full, they can and will entertain the request.

“It is not, however, something this council can act on,” she said. “It is a community park and the community should have a voice in deciding the future of the design and use, including the installation of a flag,” she said.

That was not the answer the veterans were hoping for, however, and on Friday, Aug. 5, three veterans arrived at the corner of Church and West Innes streets, flag in hand, waving at passing cars, bikers and pedestrians.

“There is supposed to be a flag here,” said Michael Catus, retired disabled veteran of the U.S. Marine Corps. “The federal regulations say the flag should be on the left of the entrance to a park. But part of the problem is we can’t get anyone to tell us where the entrance is.” He said veterans have heard “every excuse in the book” from the council, including not knowing where the official park entrance is, so vets decided they are going to “show up every day with a flag until the city does the right thing.”

Alexander said at the meeting that she understands it can be frustrating when things take longer than it seems they should, but she was confident that the formation of the new board, a number of things regarding the park could begin to move forward, including making a decision about a flag.

Council member Anthony Smith, who is himself a veteran, said he was not on the board when the flag issue was first raised, but that he has no objection to putting an American flag in the park.

“Think about what you say when you say the pledge of allegiance,” he said. “You pledge to the flag, but then you say “and to the republic, for which it stands,” which means you are pledging to honor democracy and this country itself, not just the symbol of it. So I have no objection to putting a flag there. It does make me wonder if we are then going to have a flag in every city park, and every county park, because right now, I don’t think we do, at least not at all of them.”

While the question remains unresolved, Catus said veterans will continue to come and personally hold the flag at one entrance to the park, and he hopes a permanent one will come sooner rather than later.

“There are a lot of veterans in this city and this county, and a lot of them are not happy about this,” he said. “I cherish this flag every single day, and was willing to die for what it stands for. Many others did. I don’t understand what the hold-up is.”