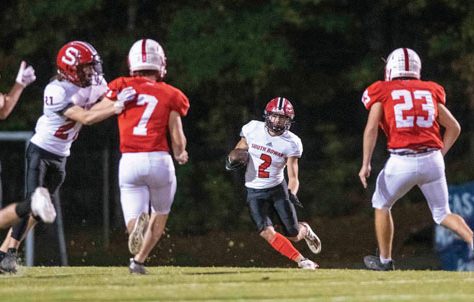 South Rowan’s Bronson Hunt (2) will be a key on offense for the Raiders this season. File photo by JON C LAKEY / FOR THE SALISBURY POST. 10/22/21, Granite Quarry,NC.

First in a series of reports on local high schools …

LANDIS — South Rowan probably will be picked at the bottom of the 3A South Piedmont Conference by everyone who offers predictions.

That’s OK. That means an opportunity to sneak up on people. That means there’s zero pressure on some athletic players and determined coaches.

“We talk every day about setting the bar high,” South head coach Chris Walsh said. “We’re not talking about trying to get one or two wins. We’re talking about being good. We had a four-game winning streak on jayvees last season, and we’ve added a lot of kids who expect to compete and expect to win. We’ll be younger and we may be smaller, but we’ll be quicker and more athletic. We’ve got a pretty fantastic group of young guys.”

Still, there are sound reasons why South is being picked last.  To start with, there’s been a dozen years of uphill fights in football.

There were no SPC wins for the Raiders in 2021 and nine straight losses followed the euphoria of an opening-night victory against Parkland.

Now throw in the sobering fact that 20 members of that undermanned 2021 squad were seniors.

Walsh is unfailingly upbeat and optimistic. He was a good man to hire for a tough job. It’s definitely going to take patience and sweat. It’s unlikely South will be good this year. Not with only eight seniors and not with a sophomore-heavy varsity roster.

But that doesn’t mean it’s going to be a lost year. It’s a year where South has a chance to turn the corner toward being good again, to lay a foundation for being good again.

Walsh returns with a better idea of what he’s up against to try to make South a factor in football.

He’s way ahead of where he was last year at this time.

A spring-time hire in 2021 — mid-May — Walsh stepped into a desperate situation. He took over a struggling 2A program that had been getting some wins against Davidson County schools but was moving up to the 3A ranks, where zero wins looked like a serious possibility.

South was outscored 36-13 on an average night, but the Raiders didn’t go O-fer.

There were some ugly ones — 53-0 against Salisbury and 43-0 vs. Concord — but South usually competed with everything it had, including an overtime loss to North Rowan.

In 2021, South did things on the run, including changing quarterbacks roughly 24 hours before the opening whistle.

This time, Walsh and a veteran offensive staff have had ample time to plan and prepare. So have the players.

“Our guys were in the weight room on Jan. 4, and a lot of them transformed their bodies with a lot of hard work,” Walsh said. “Now they look like varsity football players are supposed to look.”

Jamie Klassette was the sophomore QB who got thrown into the fire last season. While there were plenty of growing pains and turnovers, he showed his potential against West Rowan when he completed 14 of 21 with a touchdown and no interceptions. That was one of his four TD passes.

Brooks Overcash is also in the quarterback mix. As the jayvee quarterback, he broke a leg on South’s first offensive possession of 2021, but he’s come back strong to compete for the varsity job.

South’s QBs will try to get the ball to big-play man Bronson Hunt, a senior who had 17 catches for 315 yards. He had most of his pass-catching production in huge games against North Rowan and Northwest Cabarrus.

Hunt can go. He also put the ball in the end zone twice on kickoff returns.

“He’s an athlete and we’ll find ways to get the ball to him,” Walsh said.

Nacier Parker, Jason Brown, Jadon Moore and Marshal Faw lead a large group of young wideouts. There are eight in all — three juniors and five sophomores. South coaches are still figuring out which ones will be used primarily on offense and which ones will provide DB help.

“It’s a really good group,” Walsh said. “And we’re going to have them for a while.”

South rarely had success on the ground last season, but Landon Richards fought for 277 yards and three touchdowns on 95 carries. He and 230-pound Trae Rucker pace the running game.

Seth Boone, Karter Kinley and sophomore Ryan Walden are sure starters on the offensive line, while Boston Heller (6-foot-2, 294 pounds) is a newcomer who has provided a boost.

“We recruited the hallways for him,” Walsh said. “He’s just starting to learn how much fun football can be.”

Moore might be asked to handle punting and placekicking duties. Moore and Hunt will be dangerous return men.

Aquiles Bernal will be an anchor for the defensive front. Walsh said he might be South’s best college prospect in the senior class, with his combination of skills, size and character.

Sophomore Justin Beaton has brought unlimited energy to his defensive end role, and Walsh also has been impressed with Jeshua Benitez.

South has a lot of linebackers, led by inside backer Jacob Trimnal and outside backer Joaquin Bernal, who is a cousin of Aquiles.

Rucker can put his big, physical body to good use as a linebacker. Jed Waller got hurt early last season, but is expected to be a serious factor.

“They’re young guys who really want to be linebackers,” Walsh said. “They understand the physicality of the position.”

Zion Jackson will be a leader in the secondary at either cornerback or free safety.

“He was our Ironman Award winner last season,” Walsh said. “Didn’t miss a practice or a game.”

Moore and Brown could be solid options in the secondary, and Walsh is high on athletic Elijah Anderson, one of the school’s better basketball players.

South lost some defensive coaches, but Ron Riddle, who bleeds the red and black, has returned.

South pushed hard this summer, took on a lot of talented teams and even encountered 4A state champ Cardinal Gibbons in a 7-on-7 competition.

“We got on the field with them, we competed, and we survived,” Walsh said. “It was great experience for our guys to see someone like that.”

South has 75 or so players, with 38 currently listed as varsity.

There will be some more tough nights this fall, but Walsh is confident that if the Raiders stay the course, there are better days ahead.

He’s not settling. He’s raising the bar. He believes the Raiders can be good.

South is the host team for the Rowan County Jamboree on Aug. 12.