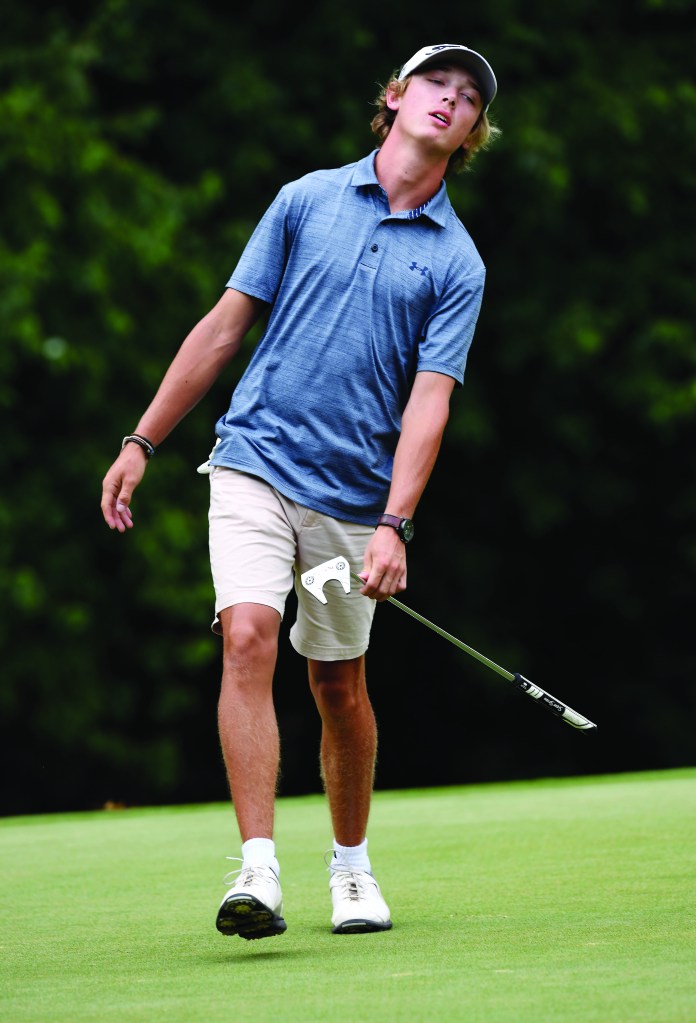 Cade Cranfield. Photo by Wayne Hinshaw, for the Salisbury Post.

Salisbury rising junior guard Jayden “Juke” Harris made an unofficial visit to Virginia and received a basketball  scholarship offer from the Cavaliers.

In the AAU Junior Olympics held at North Carolina A&T, Brittany Ellis placed  sixth in the shot put and made All-America for the fourth time. She threw 37 feet, 2 inches.

Bralin Ellis threw the shot 34-2 for sixth place and his second All-America honor.

Howard will leave Pfeiffer to accept the same position for the new program at UVA Wise.

Petrea shot a 1-under 71 to take low net, while Shook won low gross.

Clark was also the Super Senior winner with a net of 64.83.

In the Western Amateur in Illinois, Nick Lyerly shot  even-par 71 in the first round, with four birdies and four bogeys.

In the North Carolina Amateur Match Play event, Charlie Barr shot 71, Michael Childress 73, and John McCoy 79 in the first round.

Cade Cranfield, a rising senior, at Carson shot a 72 to finish second at a one-day TYGA tournament on Wednesday at Warrior Golf Club.

A native of Perth,  Australia, Hill moved to the United States to continue his volleyball career in 2017.

“I am thrilled to welcome Conrad to our Catawba College community and am looking forward to the positive impacts he will have on both the Beach and Indoor volleyball teams,” said Ferguson. “His reputation for being a relationally driven leader with the utmost integrity was emphasized by coaches, teammates, players, and community members. His domestic and international experience will be invaluable in both recruiting and training, as continue building Catawba to be the holistic benchmark of NCAA Division II volleyball.”

“Thank you to Director of Athletics Michelle Caddigan and Head Coach Brenn Ferguson for allowing me this opportunity,” said Hill. “Their vision for these two programs, combined with the direction of Catawba College under President Nelson, makes this an exciting time to be a part of Catawba Volleyball. I am looking forward to meeting the student-athletes and getting to work!”

He has coached at Northern Stars Volleyball Club, a member of the Western Australia Volleyball League since 2016, winning a gold and silver medal over three and a half years. He returned home in 2020 to coach his alma mater, St. Mark’s Anglican Community Scho